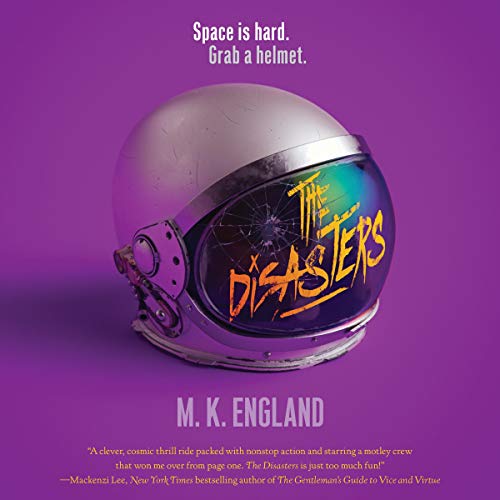 The Breakfast Club meets Guardians of the Galaxy in this YA sci-fi adventure by debut author M. K. England.

Hotshot pilot Nax Hall has a history of making poor life choices. So it’s not exactly a surprise when he’s kicked out of the elite Ellis Station Academy in less than 24 hours. But Nax’s one-way trip back to Earth is cut short when a terrorist group attacks the Academy.

Nax and three other washouts escape - barely - but they’re also the sole witnesses to the biggest crime in the history of space colonization. And the perfect scapegoats.

On the run, Nax and his fellow failures plan to pull off a dangerous heist to spread the truth. Because they may not be “Academy material”, and they may not even get along, but they’re the only ones left to step up and fight.

Full of high-stakes action, subversive humor, and underdogs becoming heroes, this YA sci-fi adventure is perfect for fans of Illuminae, Heart of Iron, or the cult-classic TV show Firefly and is also a riveting thrill ride that anyone - not just space nerds - can enjoy.

What listeners say about The Disasters

Narrator is fantastic, and the writing style is good, but the author and their editor have no concept of time, which got distracting by the end. The characters were one dimensional and their instant close relationship felt unearned. The plot also relied on the most ridiculous coincidences.

A great adventure for those who love Star Wars and Firefly. It was an excellent mix of comedy, drama and sci-fi. Plus it was very inclusive of all types of people which I loved.

The audio for this book was fantastic!

The audio for this book was fantastic! James Fouhey did an amazing job with putting so much heart into his reading. I was rooting for the disasters the entire time. What a beautiful, diverse cast. The main character was hilarious and I want to know him IRL. And bisexual rep! 😍

I loved this book so much. I love the characters and the narrator was absolutely wonderful!

I really enjoyed the audio book as a light action sci-fi . Character depth a little light but still enjoyable

I absolutely loved listening to this book. Scifi like this, Mortal Engines, Read Player 1 etc. is one of my favorite genres. The story is funny, interesting, and action packed. Never a dull moment. I sincerely hope the author writes a sequel and honestly, could see it being a great movie, too.

There is no such thing as a “gravity shadow,” but it was an entertaining story anyway. Very Firefly-esque, but with kids. I wonder if The Kick will fly again?

This book was a good story over and I really loved the diverse characters. It is important for young readers to have representation and I think this book does a great job of doing that and not veering from the story. There was the perfect amount of diverse race, genders, sexualities. All that said, the story was still great! It has everything you want in a book. It was funny, heartfelt, and exciting,

Fast paced but in the present tense

If you are a reader who has trouble suspending disbelief and get caught up on too-easy-coincidences this book will likely drive you batty. Need to hide? Here is some face changing black market technology. Need weapons? Just happen to know a place. Need a teen who signed a non disclosure agreement when he saw secret material back on earth? Check. Need a few academy washouts who are really geniuses in their field? Done and done.
For me, this is a non-issue as I love books that are packed with action, even if moving scene to scene requires some jumps. It’s why I love movies like National Treasure or Independence Day. It’s why I love shows like Chuck or Alias. And why I enjoy books like The Disasters.

Turns out these academy dropouts are framed, on the run, and low on options. They are also possibly the only ones who can save earth, a home they are forbidden to return to. England has written a compelling page turner. Definitely worth a read, though it took me a bit to get used to the constant use of present tense. Once my reader’s eye adjusted I was okay for what I believe was intended to amplify the tension and pace well.

Only big fans of YA or readers eager to indulge in huge doses of adolescent angst will be able to tolerate this book. The first few chapters were quite good, well written action and good character development. After that it devolved into continuous references to teenage fears and hopes which I suppose would be fine if I were interested. Had to turn it off and return. Just couldn't take it anymore.

I loved every minute of this book! Between the found family of a diverse cast of characters and incredible narration by James Fouhey, this book really is the perfect mash-up of The Breakfast Club and Guardians of the Galaxy. I highly recommend it!