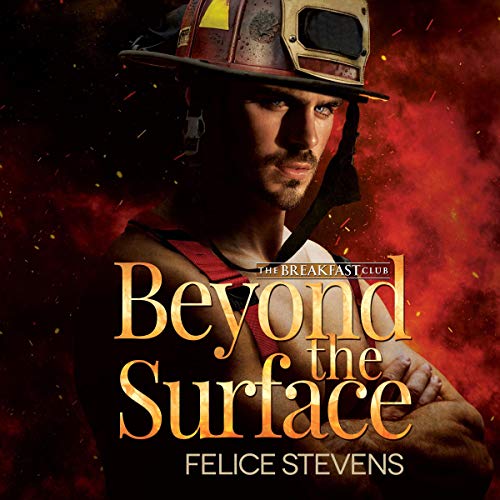 Beyond the Surface: A Second Chance at Love Contemporary Gay Romance

By: Felice Stevens
Narrated by: Charlie David
Try for £0.00

On 9/11, firefighter Nick Fletcher’s world changed forever. He's unable to rid himself of survivor’s guilt, made worse by the secret he hides from his family and co-workers. Nick's life is centered around helping burn victims, until he is reunited with the man he’d once loved but pushed away. Now he has a second chance at a love he thought lost forever.

For fashion designer Julian Cornell, appearances mean everything. His love affairs are strictly casual, and the only thing he cares about is making his clothing line a success. A chance encounter with the man he loved long ago has Julian thinking for the first time in years there may be more to life than being seen at the best parties and what designer labels to wear.

When Julian’s world takes an unexpected turn, it's Nick who helps him regain perspective on what matters most in life. Julian, in turn, helps Nick accept who he is and understand he isn’t responsible for tragedies he couldn't prevent. Lost love found can be even sweeter the second time around and after all the years apart, both men learn to look beyond the surface to find the men they are inside.

What listeners say about Beyond the Surface: A Second Chance at Love Contemporary Gay Romance

I have not read this book but was lucky enough to be given the audio . Once I started listening I was glued . As the story unfolds on Nick and Julian's life the story draws you in . Both men have scars from the past , but when the meet each other after 18 years they start to build up their relationship. Julian out and proud while Nick is hidden in the closet .
I give it 5 stars because the story was great and the Charlie David narrated it beautifully.

Story: There is so much exquisite and beautifully written angst in this story! The emotions we get to witness are raw and realistic, painted with craft and skill that puts all the right words in all the right places!
Both MCs have fascinating personalities and I loved the inevitability of their connection. The supplementary characters made for a great background for them!

Narration: A very good, clear voice and just enough acting to make the performance good, without it feeling overdone.

Everything about it was amazing

An amazing start to this series!

This is book 1 in the Breakfast Club and what a brilliant start to this series.

This was a Sweet, second chance, grab you by the feels, opposites attract, contemporary romance.

Nick and Julian's story was heartfelt and so very enjoyable.

The author has authentically captured the Perspective of being a real life firefighter. The sacrifices they make and the emotional baggage they carry.

I love this series and when the narration became available I had to listen too! I loved Nick and Julian’s story at a second chance for their happy ever after. At one point childhood sweethearts, Nick broke Julian’s heart by being determined to do what was expected of him - meet a woman and raise a family. While Nick followed in his Dad’s footsteps of becoming an NYC Firefighter, Julian pursued his dream of becoming a fashion designer. When Nick and Julian found each other again, the same feelings and old hurts resurfaced. I loved the complexity of their story and Nick trying to navigate the familial expectations as well as those of his Firefighting family. I loved Julian’s patience with Nick as he found himself and his support of the new Nick post 9/11. Their story gave me all the feels - laughter, smiles, sadness, tears and happiness. I loved their journey together.

I enjoyed this story of Second Chance, surviving and realizing that your sexual orientation doesn't make you less of a person or a man.

Nick is a firefighter struggling with survivor's guilt after the events of 9/11.
Julian is a menswear fashion designer, whose designs were stolen just before his fashion show.

Nick and Julian were in a relationship when they were teens, but Nick ran, he was afraid to come out.
Years later life happened.
Nick visits a Burn Center he volunteers at taking Julian, there Julian came up with ideas on how to make the burn dressings more comfortable and fashionable for the kids to wear. Being together, talking with one another relit the sparks they've always had for one another, and accepting that he (Nick) needs that only the support of others but Julian as well.

I will be relistening to this one..

Well written and well narrated.
thanks.

TRAGEDY AND EYE-OPENING AWAKENINGS CAN BE HEALED

Nick and Julian were lovers when they were teens. Because of Nick’s upbringing, he stayed in the closet. They meet again years later and Nick is still in the closet and keeping his mouth shut when homophobic statements are being made. In his presence. Julian has become self- obsessed and it takes something devastating for these two to come to terms as to what they want to do with their lives and possible relationship.

The narration is good and the story is reflected well.

Loved the story and narration.

Nick and Julian meet in high school and fall in love. Nick is in the closet. Julian is not

Over a decade later they reconnect and Nick is still closeted and survived 9/11. Julian is a clothing designer trying to make it to the top. Can they overcome Nick being closeted and his concern for reactions from family, friends, and coworkers and can Julian get his career back on track?

Felice wrote a beautiful second chance story. You will fall in love with these guys as well as their friends and family

I loved the narration. Sucked me in hook line and sinker

Book 5 Burning Stars *****
Audio 5 Burning Stars *****
Story-Line
A scorching romance delivered by an author that never disappoints. I loved all of her Breakfast Club books but Beyond the Surface has a special place in my heart.
Nick is such a terrific man and has had a rough past. He has PTSD from 9/11 and he copes with this by helping young burn victims. Nick has a full plate and combine this with his grueling job as a firefighter he remains firmly in the closet. It's easier than dealing with more heartache and disappointing his family.
Julian is the guy that Nick let get away. Full of life and color, this brash and amazing fashion designer lit up the pages with his personality. Julian is also dealing with a great deal of stress as a competitor has stolen his designs and he is now the laughing stock of the designer world.
Meeting again after so many years there is still a spark that remains between the suave designer and sullen fireman. Despite their physical differences and career interests both men have a giant similarity, they are both kind and give back to the community they love. I found myself rooting for them to open up their eyes and just reconnect.
Work place bullying doesn't help with Nick's desire to get back with the fiery designer but love can powerful and the men can't keep running.
A perfect story of second chances and hope served by a gifted writer that tugs at your heart strings. I highly recommend both the book and the audio.
Audio
Narrator: Charlie David
Mr. David did a fabulous job and made me feel as if I was in New York City. He fluidly eased between characters and it was so easy to recognize who was speaking. He performed a wide range of voices that made the audio a treat to listen to. The emotions were brilliantly portrayed and found myself completely lost in this tale. I urge you to visit the Big Apple and acquaint yourself with Nick, Julian and the special men from the Breakfast Club.

Felice Stevens is great as usual as bringing out all the feelings in tjis awesome second chances story! Nick finding his way back to life and to accepting himself after meeting Julian again and Julian finding his purpose in life and in his job.
I loved it! Charlie David did a great job!

I love this series from Felice. This first book start you out lite with some tears and lots of love. Must read all 5 books.