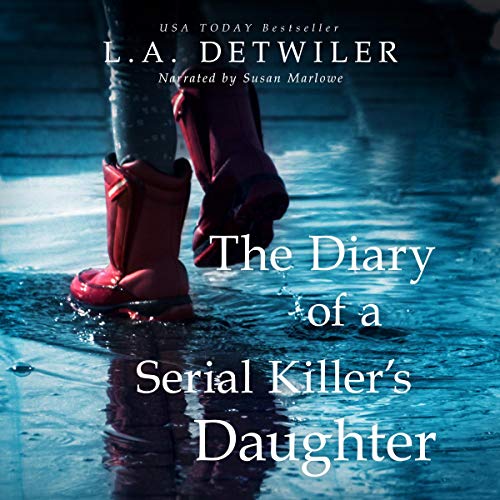 The Diary of a Serial Killer's Daughter

From the USA Today and international best-selling author of The Widow Next Door comes a demented pause-resister.

If you knew your father’s darkest secret, would you turn him in?

What if his secret was connected to you?

Ruby Marlowe’s always been a daddy’s girl. Her mother died when she was two, and her single father has ensured she has everything she needs. However, everyone has dark secrets, and Ruby’s father is no exception....

When she's young, she doesn’t understand the weight of her father’s killing game. However, as she ages, she realizes her obsessive tendencies aren’t the only elements that separate her from her peers. After she begins to investigate her mother’s life and death, Ruby starts to believe there are some secrets even she doesn’t know about the serial killer she calls Daddy.

As her father’s killing grows rampant, the secrets get harder and harder to hide - and she fears it will all come crashing down.

Will Ruby seek a different life for herself and betray the only person who has ever loved her, or will she get wrapped up in his sinister path?

A twisted pause-resister that shines an eerie light on the father-daughter bond from the USA Today and international best seller L.A. Detwiler.

What listeners say about The Diary of a Serial Killer's Daughter

As I started this and realised Ruby was autistic,I was in two minds whether to continue.Being extremely familiar with autism,if it is written about poorly I'm disappointed.In this case however ,I'm glad I continued because Ruby is fabulous.The author portrays the fiercely loyal relationship between father and daughter beautifully.Definitely worth reading,be prepared to feel sympathy though with these well rounded characters.Narration was excellent

Children pick up what is going sooner than adults

This book was interesting, the whole book is just in all diary form. I've never read a book like that. I liked it. It was nice to read the POV of someone other than the victim. We, as a society, never think of how the actions of a serial killer effect they're children or other family members. I like learning about serial killers, why they do it and what they are thinking. I like this book and i think L.A. Detwiler is a brilliant writer. i'll be looking into more of her books.

Thankyou for the free promo code in exchange for a truthful review. I really enjoyed this book, it was well written and well narrated.

Although some chapters echo another, the outstanding narration keeps one enthralled. Susan Marlowe delivers absolute excellence while presenting a plot deliciously dark. As we follow the diary of Ruby from young child to determined teenager, there are many chilling issues examined, some could have been further expressed, but in essence the book is not one to be missed, and recommended for those seeking a sinister tale.

This book was good. Especially if you liked the Dexter TV series. It is much along that kind of thing... It just wasn't my kind of book. a little too creepy for Me... (my bad, there). But the book was well written and the story thought out concisely... The Narration was very good, as well. The Author did a great job. Maybe too good... I am def creeped out!

I loved almost every minute of this dark story and love to see this song turn into a series.

Down the Dark Rabbit Hole

Ruby's obsession with protecting her father's secret takes on a life of itself putting her life of sanity into a downhill spiral of darkness. This book is well written and calls into question of "nature vs. nurture" and could things have been different. I really love how the author stays true to the title as Ruby tells the story from the prospective of her diary. I must admit this book is creepy, suspenseful and heartbreaking. Susan Marlowe did an amazing job with the voices and bringing the listener into the story. I highly recommend this book to anyone over 18 who loves suspense and madness. I received this book for free and this is my honest unbiased review.

A dark story about a girl and a secret

~Disclaimer I received a free audiobook copy of this book. I bought the kindle book to read along with.~

This story is dark. Which given the title is probably a given. We listen/read diary entries by Ruby. Ruby is a child that sees things differently and doesn’t find much acceptance from others, but her father loves her. It's just that her father is a serial killer.

The narrator does an excellent job bringing Ruby to life. I found the voice fitting for our main character.

I found it compelling. I listened to the whole book within 24 hours. Ruby’s perspective of the world is interesting, the whole question of how it is going to end, and the mystery about Ruby’s family just drew me in. It can be a bit intense, and therefore I think each reader has to decide what they can tolerate, because many heavy topics are brought up throughout.

Really enjoyed this book. It has an interesting point of view that you don’t see all that often. My only complaint is that the narrators voice is a little irritating in the first portion of the book. It is not entirely her fault as she is portraying a younger girl. It gets much, much better towards the middle and end of the book. Overall, a good book that keeps you thinking about it even after it ends.

What a unique and interesting concept for a book. I really enjoyed this listen, and the narration was superb.

Diary of a Serial Killer’s Daughter

Just wow! Not sure how I expected this to go but it was totally not from the prospective of a child. The story was really hard to put down and at a point I was ready for her to get older. Obviously you expect him to be caught, but I was still surprised at how it played out. Their were a few points I was ready for her to stop repeating and move on, but at the same time it made the book and gave you such compassion for her. Fantastic narration that totally made the story!

Exciting from the first word

I really enjoyed this book. It was exciting and thrilling. I couldn’t stop listening once I started. I thought the narrator was perfect for this book. She had a creepy edge to her which was just right for the character Ruby.

This book is, as you may have guessed, a diary of a serial killer's daughter. Ruby, who is on the spectrum, is given a diary when she is very young and she writes about her life throughout the years. She loves the "red paintings" her daddy does in the garage after he thinks she is asleep-- he is dismembering victims, of course--and she records sneaking peeks at this fascinating pastime. Later on, as Ruby grows, so does her fascination with murder and revenge. The story was okay, but it felt dragged out. It may have been more effective as a short story or novella The beginning was tough on me personally because I am not interested in children... the narrator speaks in a little-girl voice here, and the young childhood diary entries last too long. That is just me, though. If you like children and child-like thoughts, you will probably enjoy this part. Ruby is true to character in that she autistic, but listening to her rhyming and repeating phrases over and over wears thin. The reader was pretty good. I'm rating this book on the high side because the author is a really good writer... this one just didn't quite come together for me. I've read her other books, and will continue to do so.