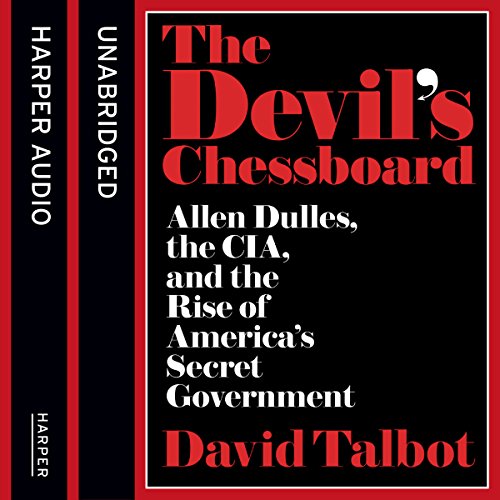 The Devil's Chessboard: Allen Dulles, the CIA, and the Rise of America's Secret Government

By: David Talbot
Narrated by: Peter Altschuler
Try for £0.00

Drawing on revelatory new materials - including exclusive interviews with the children of prominent CIA officials, the personal correspondence and journals of Allen Dulles' wife and mistress, newly discovered US government documents, and US and European intelligence sources - Talbot reveals the underside of one of America's most powerful and influential figures.

Dulles' decades as the director of the CIA - which he used to further his public and private agendas - were dark times in American politics. Calling himself "the secretary of state of unfriendly countries", Dulles saw himself as above the elected law, manipulating and subverting American presidents in the pursuit of his personal interests and those of the wealthy elite he counted as his friends and clients - colluding with Nazi-controlled cartels, German war criminals, and Mafiosi in the process. Targeting foreign leaders for assassination and overthrowing nationalist governments not in line with his political aims, Dulles employed those same tactics to further his goals at home, culminating in the assassination of his political enemy, John F. Kennedy.

Indeed, The Devil's Chessboard offers shocking new evidence in the killings of both President Kennedy and his brother, Senator Robert F. Kennedy. This is an expose of American power that is as disturbing as it is timely, a provocative and gripping story of the rise of the national security state - and the battle for America's soul.

From the reviews of Brothers:
" Brothers brilliantly evokes the Kennedys and their court - a brash yet idealistic fraternity reminiscent of Mad Men and The West Wing...Expertly researched through inner-circle interviews, the book suggests a conspiracy was also behind Bobby's murder in 1968, and names two spooks who Talbot believes were part of the JFK Dallas plot." ( Guardian)
"Bracing...full of shocking moments and juicy tidbits." ( Los Angeles Times)
"Pulitzer Prize-bait...[a] manic and near-perfect tale of the Kennedy brothers...shows us America's Camelot in a brand-new light." ( San Francisco Weekly)
"Riveting, disturbing and sometimes unbearably sad." ( Irish Times)

What listeners say about The Devil's Chessboard: Allen Dulles, the CIA, and the Rise of America's Secret Government

This book shows the despair of a US President trying to do the right thing..... But... He is surrounded by evil people from Law Firms to Oil men to I telligence officers and the military.... Jfk never stood a chance.... The CIA is the centre of evil.... War is the new economy.... Because of it and the Dulles legacy

If you want a true picture of how US Intelligence Services were run in the post war era then look no further. A very enlightening account of one mans, unoble, quest in the Game of Thrones that is Washington DC.

A great story that is superbly read that reveals great insight. Would stongly recommend it.

He really sets history straight in this book ...

The Devil’s Chessboard gives marvellous insight to history of the CIA and its malevolent practices, including the JFK coup d’etat. It makes you despair of humanity illustrates just how much change is needed. Allen Dulles really deserves to be called out for the blood on his hands.

Wow! A great book. With loads of detail on what the power brokers in Washington or more specifically the CIA got up to down the years. Very educational and well written in a no nonsense style but in the form of a ripping good yarn. Top class.

Devoured this. Jaw-dropping, Eye-Popping Revelations. Highly Recommended. Do not hesitate. Thoroughly researched. Read it, listened to it and enjoyed and so Glad I did. The despicable head of a department can wield such an unfathomable power.

Firstly a beef about the audio quality which seemed to lose speed and then recover it in a very off putting way
From beginnings in WW2 to the election of JFK the content of the book is superb if not gripping.
It starts to go off the rails with the JFK assassination. Much fascinating circumstantial evidence of CIA and Mafia involvement is given and I have to agree that this is compelling. However CIA guilt depends on the No Smoke Without Fire line of argument. Nothing is said about who the second (and third etc) assassins were, who the actual front line plotters were etc etc. At the end the book sputters out with poor coverage of the Robert Kennedy assassination, not a word about MLK, but an inconclusive JJ Angleton deathbed apologia and a completely abrupt and unexpected ending. This read like a panicked examination answer written as time ran out.

Can not get passed the lies

I can not get passed the lies about WWII. If the author can not even get basic facts right what else has he got wrong. Seems like Five Eyes culture wars nonsense to me.

This really dives into the secret history of things you’d never be taught. Simple excellent favourite audio book so far. If you like history this is for you