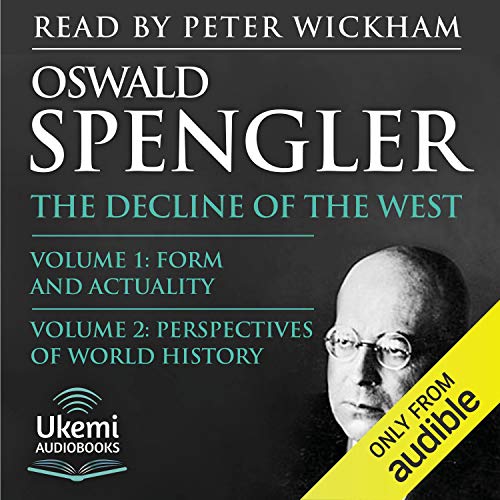 The Decline of the West

By: Oswald Spengler
Narrated by: Peter Wickham
Try for £0.00

The Decline of the West - Volume 1 published in 1917, Volume 2 in 1922 - has exercised and challenged opinion ever since. It was a huge undertaking by Oswald Spengler (1880-1936), formerly an unpublished historian and philosopher who set out to radically reconsider history - the rise and fall of world civilisations and their cultures.

His primary view was to reject the established Eurocentric paradigm (ancient/classical, Medieval - and, following the Renaissance - modern) and to take a totally new perspective. First and foremost, his intention was to offer a world overview; and on that basis to present and discuss the premise that the story of the history of man followed a fundamental pattern wherever on the globe it arose. Of particular interest to him were the characteristics of the separate and distinct cultures (established through developments in science, mathematics and the arts). The major cultures he identifies are Babylonian, Egyptian, Chinese, Indian, Mesoamerican (Mayan-Aztec), classical (Greek/Roman), Arabian and Western (European and American). Spengler offered another division - three distinct phases: Magian (societies dominated by monotheism - Persian as well as Semitic religions), Apollonian (ancient Greece and Rome) and Faustian (the ‘modern Western societies’ of his time). All these civilisations can be seen to emerge and decline in seasonal form depicted in terms of spring, summer, autumn, winter. Within the context of this map comes the detail.

Spengler drew on his broad reading to tell the story, to make the links, to ink in the patterns. His breadth of sources and insights of observations and (strongly defined) opinions is fascinating and often persuasive but sometimes contentious. Inevitably, for such an ambitious work, it has garnered controversy since it first appeared. Certainly for a generation it was required reading.

First appearing in Germany (it was finally released in one volume in 1923 and translated into other languages) its reception was coloured by the timing. Both admired and criticised, it had its base in a Germany undergoing severe economic and psychological difficulties, only to be swept aside by the rise of Nazism. Spengler rejected the racism of Nazism, but his strong attitudes (acknowledging, unapologetically, the effect of ‘imperial' individuals on history, whether through military, political or commercial activities) were often characterised as unfailingly right-wing. Not surprisingly, The Decline of the West has been in and out of fashion in the academic world, but also in its more popular appeal. However, in the dramatically changing world of the 21st century, there are resonances which are impossible to ignore.

‘The man of action is always conscienceless,’ said Goethe, one of Spengler’s two main mentors (the other is Nietzsche). But Spengler is unequivocal in his conclusion - as one commentator wrote, ‘Spengler’s prophecy that Western Europe would lose its world hegemony has been fulfilled. Must Western culture also go under?’ Spengler has been accused of pessimism, and The Decline of the West is certainly an uncompromising book to read. But in the preface he is essentially circumspect about his purpose: ‘Is there a logic of history? Is there, beyond all the casual and incalculable elements of the separate event, something that we may call a metaphysical structure of historic humanity, something that is essentially independent of outward forms - social, spiritual and political - which we see so clearly?’

What listeners say about The Decline of the West

an exceptionally well narrated production of a thought provoking very profound wok of philosophy. The narrator brings the work to life and makes a difficult read truly enjoyable

The being of a culture; its becoming and death, etc. Not a book about collapse. Wittgenstein was inspired by it. In my mind, Spengler, Heidegger, and Wittgenstein complement each other.

Not a rigorous nor systematic philosophy. Instead, a novel in-depth proposal for a deep consideration of symbol and cadence. LONG and perhaps convoluted aphorisms. But the entire book is poetic.

Nietzchean, All Too Nietzschean.

The narration was really good. Neither the book nor the performance can be easily summarized or even explained in words.

interesting take on how to do history, culture, and people.... just not an interesting author. and he kept on being wrong.

this says a lot about our society

I would like to start off by saying that I probably missed 98% of the book. Spengler is very well though out and very knowledgeable (the extent is even more impressive since it is from about one hundred years ago). I really enjoyed the points where he challenges things that don’t add for him (e.g. “western” culture and civilization).
The Classical, Magian, and Faustian morphologies are good way to classify things. Although what I remember most (it is probably me) are the many shortcomings each has.
Is humanity’s march an ascent, descent or both?
Very much worth the time!