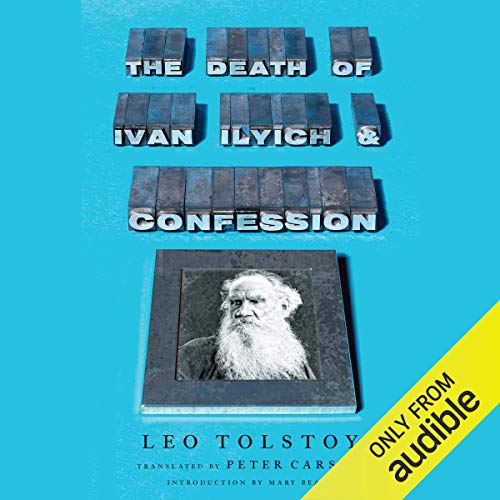 The Death of Ivan Ilyich and Confession

A pairing of Tolstoy's most spiritual and existential works of fiction and nonfiction from the renowned translator of Turgenev and Chekhov.

In the last two days of his own life, Peter Carson completed these new translations of The Death of Ivan Ilyich and Confession before he succumbed to cancer in January 2013. Carson, the eminent British publisher, editor, and translator who, in the words of his author Mary Beard, "had probably more influence on the literary landscape of [England] over the past fifty years than any other single person," must have seen the irony of translating Ilyich, Tolstoy's profound meditation on death and loss, "but he pressed on regardless, apparently refusing to be distracted by the parallel of literature and life." In Carson's shimmering prose, these two transcendent works are presented in their most faithful rendering in English. Unlike so many previous translations that have tried to smooth out Tolstoy's rough edges, Carson presents a translation that captures the verisimilitude and psychological realism of the original Russian text.

What listeners say about The Death of Ivan Ilyich and Confession

'Ilyich/Confession' was my first-ever Tolstoy reading. I sprung for the buy-one/get-one combo that this title offered. While both of these books are quite good--if not great--Ken Kliban's staccato narration is a major barrier.

First, 'Confession'. Tolstoy takes you through his personal journey of mid-life depression, and how it relates to his discovery of faith. Kliban's style is best suited for the frank and critical discussions of this title. Tolstoy's rationalistic and relentless search for the meaning of his life is superb--required reading for those grappling with their own happiness, along with rebellious teenagers, sure-footed elders, believers, atheists and agnostics alike. Beautiful prose and metaphors throughout. I re-listened to multiple chapters as I progressed through the book--lovely.

As for 'Ilyich', it's a book that I now know I truly enjoy due to all the literary analysis I've read post-Audible, but the actual narration is just painful. I feel like I just saw a blockbuster IMAX film for the first time as an in-flight movie: I now know everything about the title and I like it, but boy my first experience could have been so much more. The premise of Ilyich--an ordinary man who sees the errors of his unfulfilling life only once he arrives on his deathbed--is one that everyone should be exposed to long before meeting one's own demise.

For all the comforts that Tolstoy had at his disposal throughout his entire life, I love that he continually questioned and searched for true fulfillment. Ilyich/Confession was a great (short!) introduction to Tolstoy--I'm sure to pursue his doorstop titles in the future. As for this specific title, go for it if you're tightly budgeting credits--otherwise, you might do better finding different narrators and buying the titles separately. A better narration would have surely brought my rating up to 4+ stars.

Loved it. Made me doubt my ways and think that maybe I should learn more about christianity.