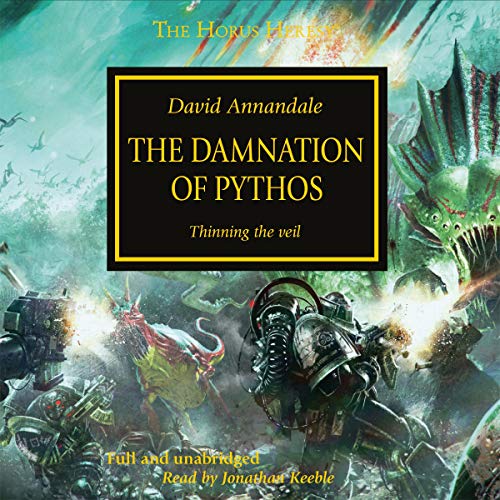 The Damnation of Pythos

By: David Annandale
Narrated by: Jonathan Keeble
Try for £0.00

In the aftermath of the Dropsite Massacre at Isstvan V, a battered and bloodied force of Iron Hands, Raven Guard and Salamanders regroups on a seemingly insignificant death world.

Fending off attacks from all manner of monstrous creatures, the fractious allies find hope in the form of human refugees fleeing from the growing war and cast adrift upon the tides of the warp. But even as the Space Marines carve out a sanctuary for them in the jungles of Pythos, a darkness gathers that threatens to consume them all.

What listeners say about The Damnation of Pythos

A complete sideshow, uninspiring. However beautifully read by Keeble. I Wish i had Skipped this book

My least favorite so far!

Trying to get through the massive collection that is the Horus Heresy, I find that this is one of those books that would have not mattered if I read/listened to it at all.

never listening to it again

JK is always a great narrator, this was just a bad book, worst in HH series, adds nothing, skip it and enjoy not wasting hours on it

What a disposable book

I’m at a lose to where this book actually fits into the HH. It doesn’t further the plot, or bring any new ideas.

Pacing was sloppy and i finished this book because I paid for it, certainly not to enjoy it.

Get brilliantly lost in this

Jonathan Keeble is the best narrator of the series. everyone else pales in comparison.

An OK book but wouldn't be recommending it

As the title says this book was OK and had some interesting ideas that it ultimately didn't deliver on for me. I felt that no worthwhile conclusions were reached and that the characters and their motivations could have been further explored.

Overall the book didn't add anything to the Heresy storyline and left no interesting reveals or hooks to be picked up by later books. The characters were a bit too cliche for my liking although think elements could have been further explored like two Iron Hands having very different outlooks and opinions instead of the sergeant just giving up and deciding his captain must be right.

I was left feeling that there was no suitable conclusion to the story, as the struggle the characters went through and challenges they faced ultimately resulted in no notable change or worthwhile outcome. If your a fan of the Iron Hands you may still like this closer look at them and the action scenes are decent.

Not as bad as it’s reputation.

First of all, this book advances absolute minimum in regards to the heresy as a whole.

Personally this means nothing to me as In any major conflict you will face battles that have no significant impact to anyone outside of those involved. A common complaint about this book which always seems strange to me.

David Annandale again uses 6 words to describe what could describe done in 2.
But is still the best space- horror writer for BL outside of ADB and Dan A.

It drags for 2 hours around the 7 hour mark, a shame as a planet coming alive by corruption should have been great, lots of missed potential amoung some great scenes.

No need to discuss narration, it’s Keeble.
Everything there is a great as you would expect.

awful story adds nothing to overall narrative of hh. narrator performance was brilliant as always.

a focused and sometimes overly detailed story.
I enjoy these more detailed stories looking at the smaller events of the HH.
this story is a little slow but there are some great moments and the narration is great.

over-written and irrelevant to the HH

Does nothing for the storyline of the HH. Actively hate the characters, even for Iron Hands. Entirely predicable and disappointing. A must skip in the series, you won't lose any context. It doesn't even really matter for the Pandorax book as you can read it without needing to know it's the same planet. Only plus is that Keeble did an excellent job as always

This is a pointless side story that ignores the rules of the universe and speeds along to pointless ending that renders then entire story pointless. This is made worse by the fact that the story starts off well with an exception into the mindset of the Iron hands after the Drop Site Massacre of Isstvan 5, with them moving closer to the machine and a simple logic that reject interpretation of orders. After all interpretation is the realm of the Emperors children. After the point where the civilians show up however it loses all of that in favor of a story about daemons and how they mess with everyone and everything on the planet.

Plot lines and threads just start and stop with no real pay off to any of them, even the main plot thread of the book feels under cooked and could have done with several re-drafts. the end takes the cake though as it's not really clear how their 'plan', if you could even call it that could work as daemons require constant warp energy to survive and they can't get that if they leave the planet. the ending also ruins any sense of progression as it's unclear if this mentality that was so fascinating in the early book in bound to a single chapter or the legion at large.

TLDR: all in a shit book that goes nowhere that's undermined by inconsistency in the writing. You miss nothing if you skip it

A decent Lovecraftian horror in the 40k universe

This is a pretty poor Horus Heresy book, because its entirely a setup for The Pilgrim and some backstory on Pandorax and focuses almost nothing on the main plot at large. What Damnation of Pythos does do well though is offer a very pessimistic and hardlined eldritch horror story. Characters are flat but serve their purpose, the actual planet is the best character in the book as Chaos influences warp this death world into something far worse. The authors angles of description for the creatures and daemons is very well done and vivid. The ending was particularly satisfying in its grimdark setup.

Good book if your looking for a horror novel, if you want more Horus Heresy intrigues you will be found wanting despite some of the bigger connections to the future and Ruinstorm.

Just skip this one

You could take every GW license out of this story and you have a horror/thriller set during wartime. It has no bearing on the overall narrative, the characters are gullible and bland seemingly just to advance the story to it obvious conclusion. Sry. Just skip it, I wish I did.

I don't get it

I don't understand why this book gets so much hate.
I would say this one doesn't fit in the Horus Heresy story arc very well, but it definitely adds to the the overall 40k universe. The story is interesting and in line with chaos horror themes. The author outlines the differences among legions and their beliefs, and how they may conflict which each other when trying to work as one unit. The author also adds an interesting perspective to those who survived the drop site massacre. Finally I would say that David Annandale, using this story as a whole, really adds to the 40k theme of the futility and insignificance of even a whole planet when compared to the entirety of the universe.
And of course, Jonathan Keeble is the best.
I enjoyed the book and regret nothing.

I'm not a big fan of the Iron Hands but the book is enjoyable. I felt like there is a massive tone shift however given the events of the previous book. It feels almost irrelevant and self contained in the grand scheme of the narrative.

Really great story! Really loved Atticus's character development throughout and it ended in an unexpected way

Don't listen to the bad reviews

Great book for fans of the Hands.
Prequel to certain events in the book Ruinstorm.

Overall the story seemed pretty slow and rather uninteresting. There were a few parts that made it okay but most of it I only listened to because it’s part of the series and forced myself to.

A prologue story for a future villain. You do get another glimpse of post-Istvaan Iron Hands.

Hard to get through. almost all of the characters are unlikeable, even the chaos characters. kind of felt like there was no point in it other than introducing the big bad daemon, who wasn't even that menacing. more of a nuisance, really