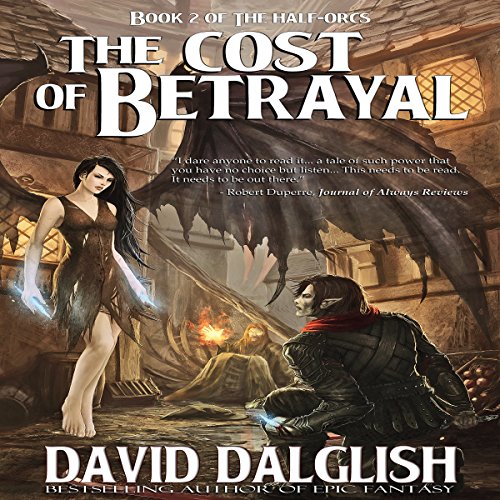 The Cost of Betrayal

By: David Dalglish
Narrated by: C.J. McAllister
Try for £0.00

Their prophet dead and their home lost, the half-bloods Harruq and Qurrah Tun form a strained alliance with a band of mercenaries outside the city of Veldaren. As the brothers and their allies wage a private war against powerful thief guilds, forces greater than them all threaten to tear them apart and ruin any hope for a better life. Harruq must defend his family at all costs, for Qurrah's love of a girl with a shattered mind and the power of a goddess may doom them all.

What listeners say about The Cost of Betrayal

A strong second book in this series.

Where does The Cost of Betrayal rank among all the audiobooks you’ve listened to so far?

I wouldn't say that this is one of my favourite few audiobooks, but it is well above average with the already interesting progression in the series being most definitely enhanced by the narration/performance.I had previously enjoyed reading this book, but found new appreciation for it with the audiobook version along with renewed enthusiasm for returning to the series once again.

I think it would be wrong to single out a single character (even Harruq) as I felt that one of the main strengths of the book comes from the ensemble cast of characters that make up the Eschaton.

I thought the narrator managed to strike the right balance between ensuring each character felt like they had a distinct voice without the performance getting in the way of the book itself.

I found that I preferred to listen to this in smaller bursts a few chapters at a time rather than all at once.

While both this and the Paladins are enjoyable series, I would recommend that anyone who is new to the author to start on his Shadowdance series first.Note - This audiobook was given to me for free at my request and I provided this voluntary review.

This is book 2 in this series.This absolutely ticked every box for me !This is the first book by David Dalglish that I have read and I was very pleasantly surprised. Well written, the construction was also good with the present happenings of the characters .I felt that there was a lot of history and that a lot more was going on that what we were listening to.A" read between the lines" sort of thing.
Every once in a while, a book comes along that shatters your expectations. Case in instance is a book so explosive and intense, deeply enthralling and equally disturbing. A book you'll proudly hold dear despite the bloodlust woven into its very essence. A book called The Cost of Betrayal , written by David Dalglish and loved by many bookworms everywhere. Well I finally joined the party, because this book? Flawless.A masterpiece of how to bring characters to life, with a complex multilayered plot that hides a parable for modern times, where morals and beliefs change faster than ever stripping all value of things we held as certainty or immutable.Beautifully heart breaking.books 3 and 4 are out and I will be eagerly devouring their "pages".C.J. McAllister narrated masterfully and had an amazing range and drew me in and kept me there all night as I pulled an all nighter to listen to him.The narrator and author do each other proud. I was voluntarily provided this free review copy audiobook by the author, narrator, or publisher.As always this is my honest opinion.

The story continues to grip me and the characters continue to develop drawing you into their violent world. The plot twists constantly . The only slight let down is the narration sounds mechanical at times like it’s computer generated.

I am completely taken with this serise, it's really good, vert well written with plenty of depth great detailing, the characters are remain strong through.
the narration is spot on, keeping with the first book.
Its well worth checking out.

Give this book your time!

If only it was longer is all I can say loved every minute of it.

I loved this book.

I loved this book, the writing is great everything that happens, how the characters are written, the setting it is all very well done.It is clearly in a Dungeons and Dragons type setting with swords, magic, gods, apparent character classes. If you know what a D20 is and like audiobooks give this one a go.

When I started listening to this I did not know there were other books in this series and feel that you can listen to this book quite happy knowing nothing of the other books.

I would say the interactions and growth of the characters are the strongest things in this book. All of the characters have their own distinct personalities this is greatly enhanced by the expert narration lending them all unique voices and emotion. The relationship between and differences of the two half-orc brothers is believable and engaging.

I enjoyed all my time listening to this book and will check out the other books in this series. Both C.J. McAllister the narrator and David Dalglish the author are going on my watch list as I want ti listen to more from both of them.

All and all I would highly recommend this book.
5/5

Universe and story are phenomenal

Series never disappoints, and I can't wait to listen to the rest. I do miss Elijah Alexander as the narrator. McAllister lacks emotion. I tend to imagine my own voices for the characters while listening. Once I get my glasses I'm buying hard copies.

Broke my heart, even rereading it!

I first fell in love with David Dalglish's novels when I stumbled upon a Trilogy offered on Kindle. The set was the first three of the half-orc series, these novels here. I knew that the story was setting us up for something huge later on in the series and this was the breaking of the bonds section. This was the novel that would show where the characters would go from their humble beginnings. So that meant some heartbreak was in order. I'm trying not to give spoilers but I will say this novel broke my heart the first time reading it and it broke it again listening to it this time.

I will say that I prefer the narrator from David's shadowdance series. I grew to love the voice is he gave some of my favorite characters. now that some of them appear in this novel, their voices are different, and that was slightly disappointing. I grew used to the new narrator though.

I have yet to read any novel by David dalglish that disappointed me. I highly recommend any of his books, especially his shadow dance series.

Not nearly as good or polished as his Shadowdance series. I'd suggest going there instead.

Should have listened to book 1 first. I was kinda lost on this one. I did enjoy it after awhile but I need the backstory. It was a slow starter as well. That didn't help. Still I would continue the series. I did enjoy it.

The beginning was tedious for me and had I been reading I would have skimmed through alot of the day to day details however the pace does get better and I found myself hanging on every word. Tessana is such a tortured soul and the way CJ McAllister narrates her and the others truly brings the story to life. At the core everyone is just trying to do what is right for their loved ones but life is messy and not easy and this story reflects that very well. I am eager to find out what happens next in the series. I would definitely purchase other books narrated by CJ McAllister. I was given this free review copy at my request and have voluntarily left this review.

A whirlwind of emotions

Book 2 is a whirlwind of back AMF forth emotions.
you both love and hate the characters. They are not heroes they are not vilians they do good things and make mistakes. A good story.

just as good the second time through

I really enjoy the story. the struggle the brothers go through and what's happening in the world makes me want to use the premise in a dungeon and dragons world. this is my second time throught the series and enjoying it just as much if not more

Great book needs to be a movie

I love this book!!

I don't usually leave reviews but this one more than earned it!! My boyfriend introduced me to book one and I loved the characters and the story itself that I decided to move on to book 2. I was not disappointed!! I laughed and got angry, I cried happy tears and sad tears and got dragged into the story so fully that I count put it down. I read the Kindle version at home and listened to the audible version at work!! thank you for a great read! ON TO BOOK THREE!!

read the first book a few years ago & I'm so glad I get to continue the story.