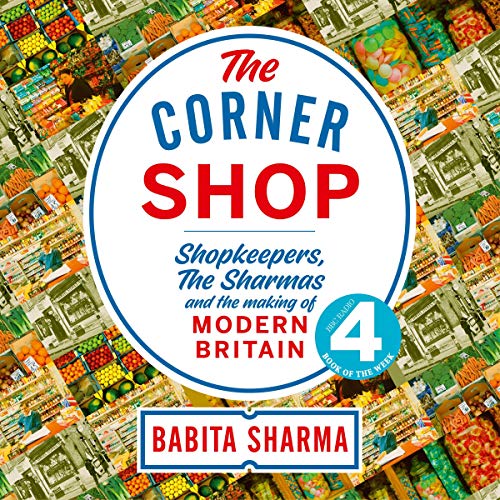 From the general stores of the first half of the 20th century (one of which was run by the father of a certain Margaret Thatcher) to the reimagined corner shops run by immigrants from India, East Africa and Eastern Europe from the '60s to the noughties, their influence has shaped the way we shop, the way we eat and the way we understand ourselves.

Babita Sharma was raised in a corner shop in Reading and over the counter watched a changing world, from the clientele to the products to the politics of the day. Along with the skills to mop a floor perfectly and stack a shelf, she gained a unique insight into a changing world - and an institution that, despite the creep of supermarkets, online shopping and delivery, has found a way to evolve and survive. The Corner Shop is the remarkable human story of these little institutions that have changed the course of our history.

"Full of life, characters, gossip and all the richness of the local community." (Sir David Jason)

"A compelling, full selection box of a story." (Sanjeev Kohli)

What listeners say about The Corner Shop

l loved it very much. It is true story of corner shop .Very interesting book

A delightful and charming review of both the corner shop and recent social history from an unlikely perspective. Perceptive and informative. Excellent commentary.

A trip back in time with a new perspective

I wasn't taken by the title and wouldn't normally choose this type of book. However this was chosen by the book club and I was pleasantly surprised.

This story takes me back to childhood and the innocent eyes with which I saw everything. I wasn't aware of why the electric went off so often, or that England faced such a huge depression. These pieces of information filled in many gaps for me and I didn't expect to find them in this book. Also not to forget the story itself. It is about hardship and struggle which I knew well, parents worked all hours and days of the week and they were a tag team to look after the kids in-between jobs. The struggle for the Sharma's was different but much like my own family.

This isn't just about a corner shop and the Sharma's, it is about life in the 70s as well as the lead up to the 70s and the years after. Politics that changes lives for the better and worst. Legislation that affected shop owners. But don't let that put you off if you don't like politics - because I don't either. Instead the story picks out changes in the law that affect us all, how the Sharma's and thousands like them ended up in England, because they were asked to come here - England needed them.

Interesting and eye opening and I'm glad to have listened. Just a quick note on the narrator... good overall just felt the delivery was rather formal instead of feeling relaxed, this may just be because it was true rather than fiction. Wouldn't put me off listening again or to another audiobook she has narrated ☺️

Nice story about a Corner Shop and the view of try world from a totally ignored angle.
From now on, I will pay more attention to my Corner Shop for sure wondering what part do I play in their story.
Babita Sharma, has shared her life and her secrets, which feel so close to heart.
I recommend this book.