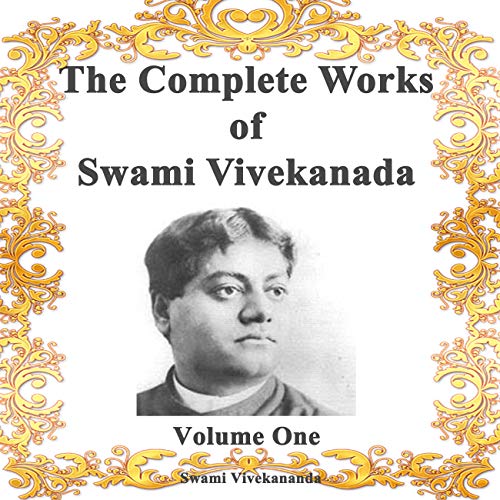 The Complete Works of Swami Vivekananda

By: Swami Vivekananda
Narrated by: Clay Lomakayu
Try for £0.00

What Hinduism needed, amidst the general disintegration of the modern era, was a rock where she could lie at anchor, an authoritative utterance in which she might recognize her self. And this was given to her in these words and writings of the Swami Vivekananda.

What Hinduism had needed was the organizing and consolidating of its own idea. What the world had needed was a faith that had no fear of truth. Both these are found here. Nor could any greater proof have been given of the eternal vigour of the Sanâtana Dharma, of the fact that India is as great in the present as ever in the past, than this rise of the individual who, at the critical moment, gathers up and voices the communal consciousness.

What listeners say about The Complete Works of Swami Vivekananda

brilliant teacher teaching from the heart. Vivakanana transends time and his teaching directly pierce the heart upon hearing them. He also brings awareness and understanding of world religions to his teachings and explains how it all comes together and ultimately leads to God. many times I was struck speechless at the beauty, power, compassion, and honesty of these teachings, well worth the time!

Enlightening! I enjoyed listening to this in the gym. It made me the most spaced out melon smuggler there!

This is the most comprehensive, concise and easy to understand opus on spirituality I've listened to. You don't need to be Hindu to relate or follow along. Written in the 19th century, there is striking similarity to 'New Age' spirituality/philosophy but from the horse's mouth. His teachings are profound, the stories delightful, incisive, the metaphors running consistently and with purpose as he builds upon a great weight of wisdom that seems timeless. The narration is excellent.

An amazing complication of sermons and speeches- extracting the essence of the vedas and Upanishads- historic Indian text. Some repetition in content as would be expected from such a compilation, though reenforcing. The narrator’s accent and delivery is in an old american style and can be monotonous and distracting. A more modern and articulate narrator may deliver this better.

Let me start with, this book was written in 1883! With now several thousand books gone through, and 14% of those books on metaphysics /spirituality, this book crushes all of them. This is volume 1 out of a 9 volume set. Don't let the 18 hour time investment scare you, it is pure awesomeness delivered with ease of understanding, not that esoteric erudite pompous diatribe manner most books are written in to squash your progress and make the author feel superior to you. (The see.., this is what happened to me, and it has not happened to you, so you suck, I am cured of cancer or (insert fatal disease) and I am great! I now have a million followers to support my not so humble ego) This author has no intention of making you feel less, but to show you the way, logically and understandably. I have read all those pop spirituality books written in the last 30 years some were ok, but most belong in the garbage next to the dirty diapers.

The teachings in this volume are not only clear and at a masters understanding, but are understandable to those with English as a second language and unsophisticated unpretentious layman peasant vocabulary, perfect for me! So much of what exists in today's society is absolutely incorrect, it is fashionable to do yoga and talk about spirituality, and though every path leads to enlightenment, some paths are absolute detours and complete wastes of time, with time being the only thing we cannot get back. The only, I mean the only great thing that has come from this pop spirituality crisis we are in for the last 30 years is yoga pants! Thank God for them! Thank you Lord Buddha, Lord Krishna, and Lord Jesus Christ for yoga pants, and Volume 1 of The Complete Works of Swami Vivekanada on Audible!

I cannot wait until the other 8 volumes are on audio! Thank you! hurry Hurry!

Being from the East, and in my late thirties now, I have been drawn to the eastern philosophy like never before. In a lot of ways, this book has significantly changed my way of thinking, from life, struggles, work, family, friends, and mortality. I am now a better person for it. This book is 18 hours long, longer than any other title I ever listened to in Audible, but I was so drawn to the narration that I raced to finish it, and plan to listen it again. I recommend this book to anyone who has an open mind and spiritual inclination. Who wants to find the meaning of life, and the purpose of living it. By all means, this book is mostly secular, and appeals to anyone with a spiritual curiosity. Thanks to Clay Lomakayu for excellent narration.

This is the book youre looking for

If youre like me, you've read just about every well known book on spirituality only to find that eventually, it all began to sound the same.

If you have came to understand the majority of the common knowledge among the spiritual community then this book could be what you need. It's brimming with many advanced truths that are beautifully explained. At first I thought I wasn't completely grasping the material but then as thoughts began arising throughout the following days I would have deep realisations about the meaning of what I had previously read.

This is a book I'll return to many times over the years and the only one I have left a review on so far.

Great lectures on the Hindi Cultural history, teaching, and comparative science on religious freedom and thought.

18 hours flew by which is why I picked up volume 2. Thanks for a nice reading Clay. I really enjoyed the narration and the content was awesome. Swamiji is so wise.

A great summary of Indian Philosophy

I have always enjoyed philosophy and this one audiobook made me realize that philosophical mind cannot find the truth until we grasp and practice spiritual practices. Swami Vivekananda encourages to practice the methods, without practice the knowledge is mere information and it has no use.

fantastic content from an amazing teacher ..read really well..thank you to the narrator thanks

please listen to this books infinite wisdom, and do not let the rather challenging narration discourage you from completing the book... the mesage is far greater than the messanger..

There is not much too say outside of ....you have to listen/read this work it will add value to any and all !!!

As a Buddhist I am in love with Swami Vivekananda’s teachings. His teachings are pure and easy to follow. Dont let the few reviews discourage you, not many look for teachings as deep as this great master’s.