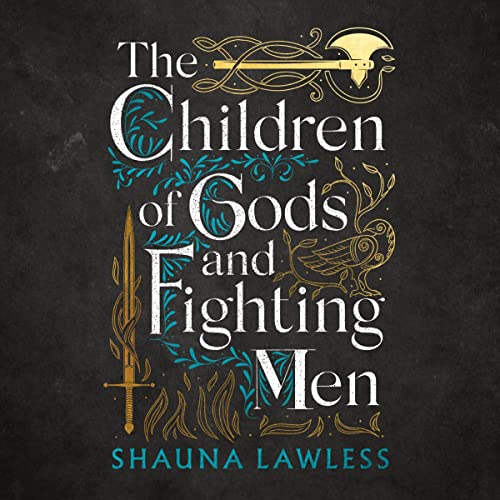 The Children of Gods and Fighting Men

By: Shauna Lawless
Narrated by: Aoife McMahon
Try for £0.00

The first in a gripping new historical fantasy series that intertwines Irish mythology with real-life history, The Children of Gods and Fighting Men is the thrilling debut novel by Shauna Lawless.

They think they've killed the last of us...

981 AD. The Viking King of Dublin is dead. His young widow, Gormflaith, has ambitions for her son–and herself–but Ireland is a dangerous place and kings tend not to stay kings for long. Gormflaith also has a secret. She is one of the Fomorians, an immortal race who can do fire-magic. She has kept her powers hidden at all costs, for there are other immortals in this world–like the Tuatha Dé Danann, a race of warriors who are sworn to kill Fomorians.

Fódla is one of the Tuatha Dé Danann with the gift of healing. Her kind dwell hidden in a fortress, forbidden to live amongst the mortals. Fódla agrees to help her kin by going to spy on Brian Boru, a powerful man who aims to be High King of Ireland. She finds a land on the brink of war–a war she is desperate to stop. However, preventing the loss of mortal lives is not easy with Ireland in turmoil and the Fomorians now on the rise...

'Highlander meets The Last Kingdom in this assured and captivating debut... I was hooked from page one.' Anthony Ryan

'I really enjoyed the book. It's an excellent read.' Mark Lawrence

'A beguiling blend of fantasy, history, and politics. A gripping start to this series.' D.K. Fields

'A vividly written story that makes the ancient past feel contemporary.' Joseph O'Connor

'Rife with atmosphere and armies, magic and compelling characters, it swept me along and refused to be put down.' H.M. Long

'An epic historical fantasy that weaves myth and history into a sprawling tale of magic, intrigue, and war. Absorbing and richly detailed.' Ian Green

'With all the complex political machinations of A Song of Ice and Fire and the bloody battles of The Warlord Chronicles, it's ideal for fans of both.' Stephen Aryan

What listeners say about The Children of Gods and Fighting Men

History, Mythology & the power of women

Well written, well paced and beautifully narrated. I am looking forward to the second book in the trilogy.
The two female lead characters are very different but both relatable.

I absolutely loved this, the narration was brilliant too. It’s really refreshing to see a historic fantasy set somewhere that isn’t England, or mainland Europe. Shauna does a wonderful job of bringing ancient Ireland to life, the character pop, the story and the politics is compelling and the prose just flows.

My only complaint is that the second book in the series isn’t out yet as I want to spend more time in this wonderful world, and with these wonderful characters.

This book has kept me up at night. I usually fall asleep to audiobooks but this one kept me so engaged that I had to turn it off and put something else on to go to sleep.

I am so tired.

I hope the author is proud of herself. If I get fired for sleeping on the job it’s her fault entirely.

I really can’t wait for the next book!

This book was a joy from beginning to end!!
The narration was also top class.
I loved the facts of the Viking and Irish History mixed in with magic and myth.