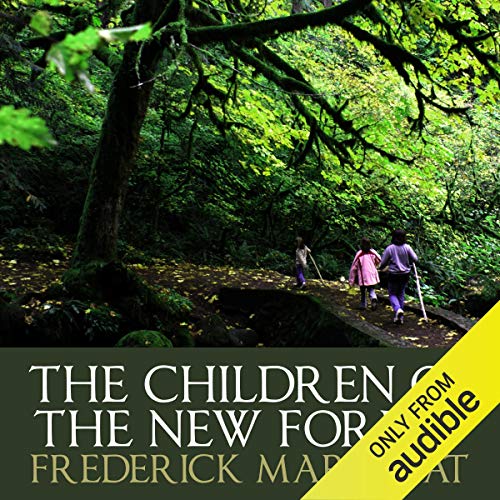 The Children Of The New Forest

By: Frederick Marryat
Narrated by: Barnaby Edwards
Try for £0.00

In the opening of this historical adventure tale Captain Frederick Marryat directly addresses his juvenile audience, telling them to look up 1647, the year in which his narrative takes place. The historical backdrop is thus set as the English Civil War. Four children of a cavalier who’s been killed in the war must hide out in England’s New Forest when their family home is burned down.

British actor Barnaby Edwards voices the impetuous and resourceful youths skillfully, as well as their neighbors in the British countryside with their authentic and varying accents and vernaculars. Juvenile listeners will greatly enjoy these youths' adventures during tumultuous times.

Captain Marryat's The Children of the New Forest is a wonderful tale in narrative, historically rich and quite fascinating. This story of adventure, treachery, and love takes place during the English Civil War, when fellow countrymen are found enemies and are set against each other, Roundhead and Cavalier, Parliament and the King. Many hoped for the same thing: justice. But, for a long time, neither could find it. In the midst of all were the Beverlies, the family of a faithful Cavalier, who died in service of the king. His four children were left orphaned when their mother died of grief. Then, word came to them that the Roundheads were going to burn down their estate, Arnwood. Fate sent them into the hands of an old forester, Jacob Armitage, and they escaped to his cottage. From there, the story unfolds.

Captain Frederick Marryat (July 10, 1792 – August 9, 1848) was an English Royal Navy officer, novelist, and a contemporary and acquaintance of Charles Dickens, noted today as an early pioneer of the sea story. He is now known particularly for the semi-autobiographical novel Mr Midshipman Easy and his children's novel The Children of the New Forest, and for a widely used system of maritime flag signalling. From 1832 to 1835 Marryat edited The Metropolitan Magazine. He kept producing novels, with his biggest success, Mr Midshipman Easy, coming in 1836. He lived in Brussels for a year, travelled in Canada and the United States, then moved to London in 1839, where he was in the literary circle of Charles Dickens and others. He was in North America in 1837 when the Rebellion of that year in Lower Canada broke out, and served with the British forces in suppressing it. He was named a Fellow of the Royal Society in recognition of his invention and other achievements. In 1843 he moved to a small farm at Manor Cottage in Norfolk, where he died in 1848.

His daughter Florence Marryat later became well-known as a writer and actress. His son Francis Samuel Marryat completed his late novel The Little Savage. Marryat's novels are characteristic of their time, with the concerns of family connections and social status often overshadowing the naval action, but they are interesting as fictional renditions of the author's 25 years of real-life experience at sea. These novels, much admired by Joseph Conrad and Ernest Hemingway, were among the first sea novels. They were models for later works by C. S. Forester and Patrick O'Brian that were also set in the time of Nelson and told the stories of young men rising through the ranks through successes as naval officers. His later novels were generally for the children's market, including his most famous novel for contemporary readers, The Children of the New Forest, which was published in 1847 and set in the countryside surrounding the village of Sway, Hampshire.

What listeners say about The Children Of The New Forest

beautifully wrote book, very detailed in the ways of the forest icant help but feeling hungry when they keep disucing freshly cut venison and farm vegetables when I was listening to this in the evening I should have made a game out of every time dinner was mentioned. would be great to have them skills to fend for your self and not rely on tescos for food

Have loved this book for a very long time, set in my favourite historical time

I always meant to read this as a child but somehow never did. Having seen this on the Audible list I thought it would be interesting to listen to it. I would have loved this book as a young girl and I loved it now. What a wonderful story of good triumphing over evil - and never more than now in early 2022 was this a good time to finally get acquainted with The Children of the New Forest. One of the very best children’s books ever written!

The Children of the New Forest

This was an excellent audible version of this book, one of my favourites as a child.
I highly recommend this story.

Would you consider the audio edition of The Children Of The New Forest to be better than the print version?

This book is well narrated and all the better for being written before the though police controlled children's stories. You can read it as an interesting historical perspective, but I suggest enjoying it as a tale. It is equally fine in printed form

Jacob Armitage has always been my favourite character in the book A true noble man, if no nobleman.

Did Barnaby Edwards do a good job differentiating each of the characters? How?

This is a pleasant late night read. A book at bedtime!

What a splendid rendition of a much loved childhood tale. Worth revisiting audible listeners! The Civil War is played out and the narration enhances a riveting tale b

Another great read from Included books, this was historically interesting and a "jolly good read" :-)

....An enchanting tale that catches your attention quickly before sneaking....would recommended for young and old

This story has almost everything: an interesting plot, a historical setting, valour, love and loyalty. However, the ending seemed rushed, was predictable and a bit anti-climatic. Nonetheless, I recommend it to people of all ages.

So nice! Full of adventures and happiness!

So nice! Full of adventures and happiness! Positive attitudes have always been there when facing difficulties!

This is a very pleasant story and a forerunner of many of the YA novels that have come since. (Some may like that the heroes and heroines are little gentleman and ladies; the same thing may drive other listeners crazy.)

The reading is very good, but there are a few faults in the production: about halfway through the book there are a number of places where lines are repeated.

This was written as a book for children from a different era, so keep that mind. Nothing really terrible happens to the characters (during the story telling); however, they do face interesting challenges and choices. The narration is well done. I really like the historical perspective and setting of the story. Nothing too heavy and a nice break from the modern world. Enjoyed the listen!

Such a lovely story!!

We adored this story so much, we listened to it as a family and many great discussions came out of the listening!

Best book you can listen to!

I listen to this book every day! It’s so so so good! It’s a must read!

The end was very happy

I found this enjoyable book at different times reminding me of The Boxcar Children, Great Expectations, and The Swiss Family Robinson.

The narrator was amazing. Really brought the characters to life, giving them great accents and reading slowly. Great overall experience!

This was so pleasant, the narrator did such a nice job- easy to understand the characters and loved the varying voices! The story is absolutely wholesome, each chapter better than the last.

vivid pleasant story about Cromwellian England and 4 Cavalier children orphaned. they were rescued in the nick of time before being burnt to death in the family Manse. well written.