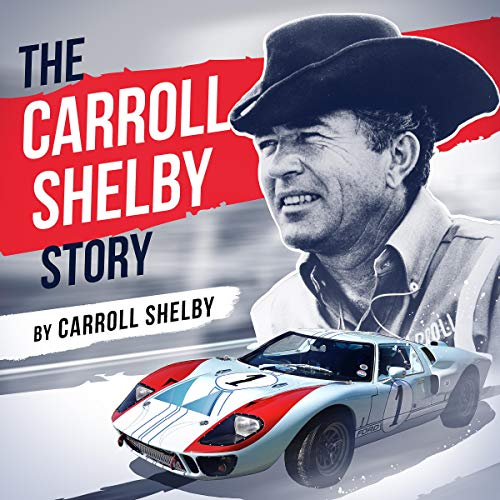 By: Carroll Shelby
Narrated by: Chris Abernathy
Try for £0.00

Carroll Shelby wasn’t born to run. He was born to race - some of the fastest cars ever to tear up a speedway. The exciting new feature film Ford v Ferrari - starring Matt Damon as Shelby and Christian Bale as fellow racer Ken Miles - immortalizes the small-town Texas boy who won the notorious Le Mans 24-hour endurance challenge and changed the face of auto racing with the legendary Shelby Cobra. But there’s much more to his high-velocity, history-making story.

A wizard behind the wheel, he was also a visionary designer of speed machines that ruled the racetrack and the road. While his GT40s racked up victories in the world’s most prestigious professional racing showdowns, his masterpiece, the Ford Cobra, gave Europe’s formidable Ferrari an American-style run for its money. If you’ve got a need for speed, strap in next to the man who put his foot down on the pedal, kept his eyes on the prize, and never looked back.

What listeners say about The Carroll Shelby Story

Not the story of Le Mans

Early parts of the book are interesting but not particularly well written.

The Le Mans build up and race is only over a couple of chapters towards the end of the book.

Quite a dry book.

I listened because I wanted to hear the story but got it was hard work.
The narrator made it sound like the worlds longest shopping list.
He has three tones and they repeat identically in every sentence of the entire book.
I found myself constantly having to rewind as I was drifting off.
Carroll Shelby has a great slow drawl to his voice that gently rolls along but this guy who they obviously chose to try and sound similar just seesaws along like a washing machine on a soak cycle.
Really spoils a great listen sadly.

Really good story, the way it is written and delivered is very much as if Shelby is sitting across the tabke from you, its a fantastic insight i to early GT racing, and real treat for the techincal buffs!

Great story and very engaging. Join Carol on his journey from chicken farming to racing to building his dream

Interesting but not what I expected

I bought this after watching Ford vs. Ferrari, hoping to get those extra details that weren’t in the movie. That did not happen. This biography covers more of Shelby’s earlier life and days leading to the time before the Le Mans, of the movie, which was very entertaining but the parts covering the technical parts of the cobra was hard to follow. I’m not petro head so I felt stupid on those details of how the car works.

Now the portion that covers the events of the movie is about 14 minutes of the book, told through the eyes of someone else. It was simply the cliff notes of the movie.

It’s still an interesting read but not good for filling in the gaps of the movie that may have brought you here.

I just happened to see a 2 hr Netflix documentary about Shelby from childhood to death. It was an excellent show, I learned more about the man than I had ever known. I saw Ford v Ferrari a week later. I think the movie did a pretty good job, but fell way short (and inaccurate) of what I had seen on Netflix....my point being....the book so far has tracked to the documentary. Great listen.

Saw the film Ford V Ferrari and loved it. I wanted to learn more about Carroll Shelby who was played by Matt Damon in the film. I remember hearing stories from my friend's dad who used to drive an AC Cobra. I came across this audiobook and it did not disappoint. Felt like I was right there with Shelby. Fascinating to hear Shelby in his own words.

Captures the writers personality in a relaxed straight forward and compelling story climaxing in the legendary Le Mans Ford-Shelby victory. From this memoir it’s easy to understand his success.

Told in a reptetative way, when it comes to race stories, but the context it offers to understanding Carroll Shelby is amazing to discover.

Great follow up to the Ford v. Ferrari movie (and compare Hollywood to real life (sometimes real life is even more exciting)). Carroll is a god of racing. His legacy and experience are incredible. I wish there was an Audible version of his Cobra Story (which now appears to be out of print but am told is a great book).

I’m still listening but, I’m bothered by the slow, stereotypical, back country, not much education Texan portrayed by the narrator.
If Carroll Shelby did speak this way then, I’m fine, I’ll accept it because he was a genius and my favorite vehicle is the Shelby GT.

I thought I knew a lot about the Shelby Sports Cars and Carrol Shelby’s racing efforts for Ford. Also about the Shelby Cobra.
What I learned was that he was a great race car driver that was able to beat the best Europe had to offer.
I couldn’t put the book down!

Definitely one of my favorite audiobooks. Amazing man was Carroll Shelby! The reader was perfect for this book.

A must read for the motor enthusiast

Shelbys story is there amazing tale of adventure and success in one of the worlds most difficult sports. Not only is it a great story of Shelby’s racing activities but With a vast amount of entertainment, enlightenment and education on a very important era in American and international racing.