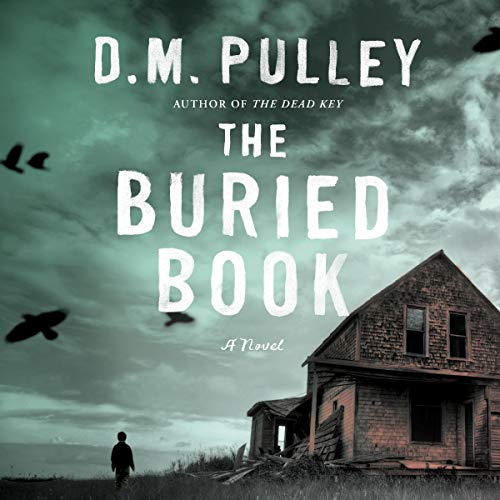 When Althea Leary abandons her nine-year-old son, Jasper, he's left on his uncle's farm with nothing but a change of clothes and a Bible.

It's 1952, and Jasper isn't allowed to ask questions or make a fuss. He's lucky to even have a home and must keep his mouth shut and his ears open to stay in his uncle's good graces. No one knows where his mother went or whether she's coming back. Desperate to see her again, he must take matters into his own hands. From the farm, he embarks on a treacherous search that will take him to the squalid hideaways of Detroit and back again, through tawdry taverns, peep shows, and gambling houses.

As he's drawn deeper into an adult world of corruption, scandal, and murder, Jasper uncovers the shocking past still chasing his mother - and now it's chasing him too.

What listeners say about The Buried Book

I would recommend this book to any one.
A good well thought out story. Told through a child’s eyes. Could not put it down.
The narrator was brilliant, bringing everything to life.
Hope they do many more together.

this is a very difficult book to read.

this book captures the idea of a nine-year-old caught in difficulties too great for him to understand. it is hard to read how there are no really good people in this story. except of course for the nine-year-old. I would not recommend this book to anyone under 18 years old. it is it is unremittingly hard to handle. the author has done a great job of showing what a nine-year-old might be like in horrible horrible horrible situations. as a book it fails , but as a character study it is without peer.

DM Pulley's second book does not disappoint. Her first book, the historical mystery The Dead Key, came as a complete surprise. The Buried Book is completely different, but just as good. In 1952 nine year old Jasper Leary has seemingly been abandoned by his mother Athea who leaves him with her brother and his family. The novel is about the hardships Jasper faces as he searches for his mother. Luke Daniels narrates brilliantly as did Emily Sutton-Smith with The Dead Key. DM Pulley is an author worth watching. Brilliance Audio deserves credit for their outstanding selection of narrators for her two audiobook novels.

I recommend this book and this author.

I thought The Dead Key was one of the best books I had read by this author, at least until I read this one. This story was complicated, and intricate to the point I worried how she was going to keep it all straight. She did and the results were a story that should taken to the screen. There was mystery, intrigue, ignorance, compassion, tension and fear. The author took the listener to a time in American life that anyone over the age of fifty can identify with but those under fifty can learn and be entertained. I can't recommend this book strongly enough. I will warn some that there is some child abuse in the story but it is an integral part of the story and could not be written out without the story suffering. The writer is adept in her inclusion that you understand why and how these things happened in fifties America. It went on it is necessary that we always be aware of some of the darker areas of our history.

Luke Daniels strikes again. He brought the book to life without being intrusive. I was hardly aware that he was there because the story was so intense. His performance was outstanding.

The book had an intriguing premise, but took FOREVER to get to a predictable and depressing ending. The young protagonist goes through a series of near-miss accidents, each more improbable than the last, in the pursuit of what he seeks, but is so petulant and repetitive that it's impossible to invest in his journey. It was a tedious listening experience.

The character of Jasper is enjoyable to read about. However, almost every single one of the adults in the book is a horrible person. Even Jasper's dad and uncle spend a good deal of their time yelling at Jasper, about one thing or another. They often assume that he has done something bad, which he usually has not done,but as a result he has become a tortured, anxious, guilty nine-to-ten-year-old boy. The small community in which he lives is full of unhappy people, criminal actors, and in general people you could easily live without knowing for, possibly, ever. There is absolutely zero humor, some of which could have lightened up the relentless suffering and misery. Not a happy story, and with a plot that is dense, confusing, evil and not really worth keeping up with. Fun!

Would you ever listen to anything by D. M. Pulley again?

Mr. Daniels is OK, except that he is forced to yell a lot, and that is a very limiting way to have to narrate. Jasper and his cousin Wayne don't yell, but all of the adults do, repeatedly. There is a LOT of repetition in the book, not just the yelling. There is a LOT of bad behavior, people assaulting each other, mysterious (and not in a good way) drug dealing, prostitution, murder, and so forth. In that way the book is full of cliches. It is not at all easy to write something new in this genre, and the author tries very hard to do that. In her trying so hard, which you can see and feel, she fails. Again, there is no humor, and that would lighten up the material greatly. I could go on, but you get the picture.

Absolutely NOT. It is relentlessly miserable. Two hours of sitting through the misery, suffering, assaults, cruel people, violence towards all the characters including Jasper, etc. etc. Who among you would want to watch two hours of that? Would you actually want to see Jasper sexually assaulted by a bus driver who forces the boy's hand into his pants so that Jasper can feel the "monster" that is in there??? And then have him remember the trauma for the rest of the book? Ach. They couldn't pay me.

Where to even begin?

It's said during certain times and extraordinary circumstances children must grow up too soon. They leave behind the days of youthful play and carefree thoughts and must confront unpleasant, wrenching, mind-bending, truths of the present that blend with nightmares of the past. Such are the heartbreaking days that await nine-year old Jasper Leary as he awakens in a world where everything makes sense and falls asleep in a world where nothing will ever be the same.

The next two years are rife with confusion, fear, sorrow, danger, and dashed hopes as Jasper builds a new life utilizing enough courage and fortitude to weather and eventually find a twisted road home.

His terrifying experiences will remain with you. The author paints vividly allowing us to accompany this exceptional child on his journey. The narrator skillfully distinguishes voices so we know the speakers without attributions. The story begins with an air of anticipation and soars to an unrelenting intensity you cannot escape.

You don't want to pass on this one.

loved it. narrative was done quite well, and made listening quite easy. Not for a weak minded or sheltered personality.

Becomes rather tedious and is too long. Too many characters. Really don't feel it's worth the time.

I am not glad I listened to this book. It is a dark, frustrating tale of abuse and poverty. Yet it was impossible to quit listening. I liken it to some tragic cinematic masterpiece like Schindler’s List.

The setting is rural Michigan in the 1950’s. I was born in 1955, so the relationships, family secrets, whispers are familiar and authentic. My extended family suffered minor scandals compared to this tale, but to this day my mother and her sisters refuse to answer our questions about their pasts. This where the frustration lies, a 9 year old boy is constantly seeking the truth about his mother and no one is talking.

Should you buy this novel? Yes if you love tragedies and great writing.

I really liked the way the book was organized . Each chapter asks and answers a question. One of my favorite listens.