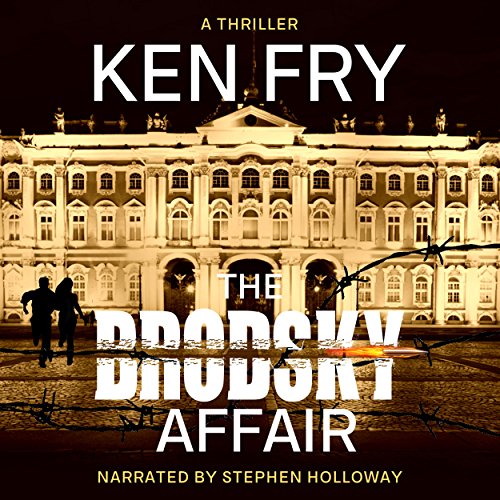 By: Ken Fry
Narrated by: Stephen Holloway
Try for £0.00

Lost art. Murder. A collector who will stop at nothing.

The Brodsky Affair will keep you on the edge of your seat as Ken Fry weaves a tale of murder, mystery, and intrigue.

Jack Manton, an art dealer, and his partner, Tamsin Greene, did not expect to be targets of assassination attempts. But when they began to track down the lost paintings of Russian artist, Mikhail Brodsky, now worth millions...that is what happened.

Berezin, a partially disabled, entrepreneurial Russian criminal, murderer, and art thief, employs a deadly and vicious ex-Soviet agent to follow Manton and use whatever means necessary to steal what he finds.

The chase moves from Australia to UK, to Russia and France, as Interpol attempts to unravel a complex trail of murders and art thefts.

Jack Manton faces a perilous path of murder and deceit before Brodsky's last unfinished work is revealed and its destiny decided at a final confrontation.

Get your copy and hop on a roller-coaster ride!

What listeners say about The Brodsky Affair

I don’t often listen to thrillers, but this complex sleuthing of artworks and the nasty world of art thefts has enough twists and turns to keep me hooked. The parts set in the war and concentration camps were very moving. The reader is to be commended for his fantastic Russian accents, and the pace and clarity of his reading.

Loved this book well worth listening too.
If you love a good story with plenty of twist and turn, a fair bit of history in the mix and a good storyteller. Then this book is far you.

The story is an adventure chasing paintings all over Europe. It is exciting, well researched and interested. Really enjoyed.

An exciting adventure into the art world.

Enjoyed this. The best parts for me were the scenes involving the painter, Brodsky, and his incarceration at the Nazi Camp. The author wrote these parts beautifully. The whole story was exciting and the narrator's reading made it more so. A recommended listen.

This is a book that lends itself to a slow, deliberate read. The text is rich and if you zone out for even a moment, you'll feel like you missed something vital. Likewise, there can be entire sections where the slow burn is SO slow you feel like nothing is going on. All and all its a solid story, and I definitely recommend for a patient reader.

Great story even though I did wonder how dense one person could be in pursuing his goal at fatal cost to many he brought from their obscurity to their sudden death. I began to wonder how self serving one person could be without any regard to any other human being. At least he started seeing the most important parts of his life before he potentially lost it all. And it looks as though the blonde has shown him that all is not yet settled.

If you are looking for a quick listen, this is not the audiobook for you. It will appeal to those who like long, in depth stories. The plot takes time to develop and evolves into an exciting international thriller that goes on and on. The characters are part of the art world, including dealers, collectors, researchers, appraisers, and thieves. The story is set in Britain, Russia, and France.

Author Ken Fry spins a fascinating tale. The book starts out delving into the lives of the characters. A financially struggling British art dealer searches for art to sell at a profit. He hopes to discover lost, important works. An unscrupulous collector will go to criminal lengths to obtain particular pieces of art for his private collection. As the plot unfolds, danger and excitement abound. International law enforcement, specializing in stolen art, chase shady characters and an assassin across Russia and France. The plot has culture mixed with grit.

The ending quickly alluded to the possibility of further adventures and danger without being a true cliffhanger. It is a complete novel with a satisfying ending.

Narrator Stephen Holloway is phenomenal! He has a delightful accent and does an excellent job with non-English phrases. He is truly talented! He has one of those voices that could be saying anything and people would still want to listen to him.

I rate this audiobook at five stars. The plot is exciting and well written. I enjoy a long story that is meant to be listened to over time. The narrator gave a fantastic performance.

Lost paintings of a famous Russian artist, are they were worth dying for . As you travel from city to city with one who is obsessed to obtain them. Another good thriller by the author with good narration
Given audio for my voluntary review