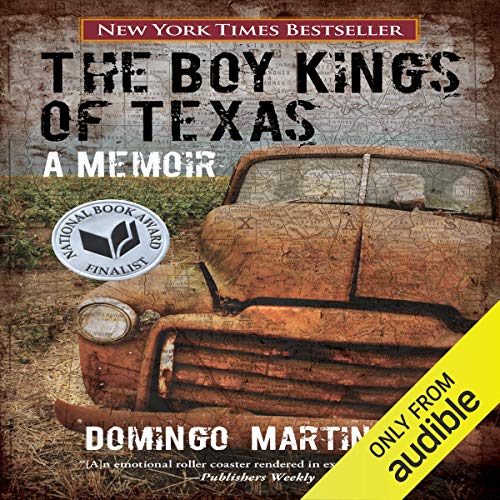 The Boy Kings of Texas

By: Domingo Martinez
Narrated by: Emilio Delgado
Try for £0.00

Domingo Martinez lays bare his interior and exterior worlds as he struggles to make sense of the violent and the ugly, along with the beautiful and the loving, in a Texas border town in the 1980s. Partly a reflection on the culture of machismo and partly an exploration of the author’s boyhood spent in his sister’s hand-me-down clothes, this book delves into the enduring, complex bond between Martinez and his deeply flawed but fiercely protective older brother, Daniel. It features a cast of memorable characters, including his gun-hoarding former farmhand, Gramma, and “the Mimis”- two of his older sisters who for a short, glorious time manage to transform themselves from poor Latina adolescents into upper-class white girls. Martinez provides a glimpse into a society where children are traded like commerce, physical altercations routinely solve problems, drugs are rampant, sex is often crude, and people depend on the family witch doctor for advice.

Charming, painful, and enlightening, this book examines the traumas and pleasures of growing up in South Texas and the often terrible consequences when different cultures collide on the banks of a dying river.

What listeners say about The Boy Kings of Texas

I've been pondering what to say about this book for sometime. I'm conflicted because, like the author, I am from Brownsville. On one hand I totally relate to a lot of what was in the book, and on another hand, I'm a little offended by his description of our hometown with such disgust. Like the author, I left Brownsville a long time ago because there was nothing left for me there, I mean I wasn't really going any where at that time and I have a lot of family and friends who still live there. The picture he paints of our hometown comes off as a town full of illiterate, uneducated, drug dealing, pot smoking alcoholics. Now, I get this is HIS story and that is not what life in Brownsville was/is like for everyone who grew up there. I normally devour audiobooks. This one, not so much. I had to take breaks before continuing. I don't know if it's because I was offended or because it got boring. The narrator was excellent and made the book more interesting than it actually was. If I had read it I don't know that I would have finished the book. I did laugh out loud at times and even cried, and in the end I do feel some pride in knowing that this author is from my hometown even if he doesn't feel pride for his hometown.

There were times when I had to pause the audio because I was laughing so hard and I didn't want to miss anything. There were also times when I stopped dead in my tracks because of the power and truth in his words. Times when I replayed sections of the audio many times to be sure I had memorized each word correctly.

This story is honest and frank and a hell of a ride. The delivery of Emilio Delgado is spot on. I highly recommend this story to anyone.

Lots and lots of f-bombs, but a fascinating story.

I heard a few stories from the book on NPR and decided to try it out. The story was super interesting, but the profanity was so terrible that I thought my ears would bleed. I had to skip over whole sections because of it.

Great characters, wonderful colorful language, ironic humor this book has it all. The narrator does a great job of interpreting the stories with just enough of a border accent to make you feel it's a great story teller sharing his family experiences.
This book is a real gem - perfect as an audible book.

What made the experience of listening to The Boy Kings of Texas the most enjoyable?

The narration of the book and the story line made it hard to put this book down.

I am from El Paso, TX and Hispanic as well. I found many similarities with the culture and yet it feels like another world when he beautifully describes his experiences.

I love this book. I alternately fell out laughing and wanting to cry. What a great read! Between the powerful writing and great narration, I thoroughly enjoyed this experience.

Interesting insight into growing up in a Texas barrio. It is a study of the forces that shape people's lives.

As a former New Yorker, now "gringo", living in South Texas this made me laugh out loud at some of the references that I have learned since coming here. Written openly about his life and a great glimpse into a colorful part of America that has not been homongenized as of yet still. Loved it!

I now understand what one of my coworkers meant when he said he grew up "in the Valley" and just gave me a strange look, like I would never understand what his early life had been like. After listening to this book, I actually think I have a good idea. The narrator was outstanding. I would play excerpts for my friends, some parts were hilarious. I'm looking forward to his next book.