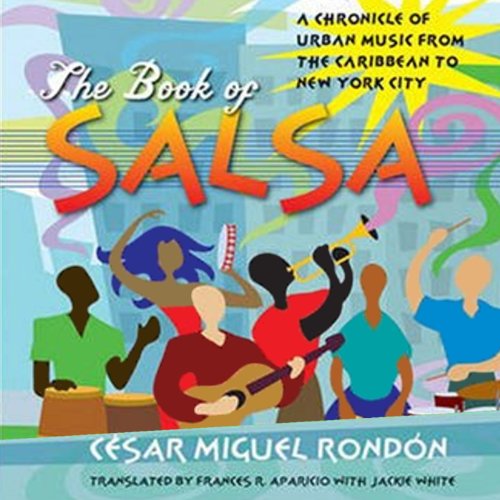 The Book of Salsa

Salsa is one of the most popular types of music listened to and danced to in the United States. Until now, the single comprehensive history of the music - and the industry that grew up around it, including musicians, performances, styles, movements, and production - was available only in Spanish. This lively translation provides for English-reading and music-loving fans the chance to enjoy César Miguel Rondón's celebrated "El libro de la salsa." For this first English-language edition, Rondón has added a new chapter to bring the story of salsa up to the present.

What listeners say about The Book of Salsa

As of 2014, the best audiobook on this subject

SHORT VERSION: Of the books on this subject, there are three that are much better than this one: Faces of Salsa, Salsa Talks, and the quintessential masterpiece of the genre, Ned Sublette's Cuba and Its Music. None of these is or is likely to be available in audio, so if you want audio, this is the best one out there - if you find a better one, please post it here so I can find out about it! I would also point out that these four books are all different and have surprisingly little overlap. To really get your head around the subject you should read all four and then some.

The book and narration have similar strengths and weaknesses. The book is well-written and handles the big picture well, but needs serious proofreading on facts. The narration is well-delivered and I prefer listening to it to reading the hard copy which I also own, but it too has serious proofreading problems - on pronunciation.

NARRATION: I am a serious student of Spanish but not a native speaker. About 70% of the time, this narrator's pronunciation, while it doesn't sound native, is better than mine, but the other 30% is embarrassingly sloppy and with all the Spanish courses I've gone through, it's like fingernails on a chalkboard to hear him say "Antonio mahKEEN" (instead of maCHEEN) and to pronounce Valdés or Hernández perfectly one time and like an American baseball announcer the next. So that's why I say "sloppy" - it's not that the narrator is clueless - when he's good, he's quite good. But in a way, this makes it even more annoying that he didn't take the time to edit his errors. We all know that these narrations are done with digital audio that can be edited as easily as an email. Why not just have a native speaker listen to it and point out the errors and fix them???? Por favor!!! This book has Spanish words in nearly every sentence. It was ridiculous not to get a native speaker, or at least to have a native speaker identify the errors and to go back and punch in. That said, it's more than passable if you compare it to Tom Wolfe's "Back to Blood", which has the most comically horrible pronunciation imaginable. (noooo! que gym! oh my god, I'm getting nauseous just remembering that one - and it's such a great book ... grrrrr)

THE BOOK: It's a love-hate thing. Rondón is a very thoughtful guy and writes compellingly, making big, important observations well, but he makes enough factual errors that you have to be careful you're not mislearning things. For example, he calls Tito Rodríguez a "Cuban singer". Tito Rodríguez had a Cuban mother and a Puerto Rican father but he spent his whole life in PR and NY and is absolutely considered a Puerto Rican singer - in fact, one of THE major Puerto Ricans of his era. Calling him Cuban would be almost as bad as saying that James Brown was one of the great white soul singers or Michael Caine is one of the top Italian actors. If you were talking about the iconic singers of the 50s, you'd use Beny Moré or Celia Cruz for Cuba and Tito Rodríguez or Ismael Rivera for PR. Rondón also mixes up Pete Rodríguez the boogaloo artist with Pete "El Conde" Rodríguez, a very important and soulful Puerto Rican singer who could scarcely be more different from his namesake. There are other problems. This book is a great "forest" with some flawed "trees". I temper these criticisms with the fact that I bought the audiobook after buying the print book and I would buy both again. But I'll temper THAT with the fact that I'm probably more obsessed with this subject than you, the reader of this review, probably are.

THE TRANSLATION: Note that the original book is in Spanish and I've been told that it's a lot better, but I'm only fluent enough to complain about this narrator, not fluent enough to get more from the Spanish version that I can from the English! I've read many books with bad, overly literal translations, like "Cuban Fire" - "The Book of Salsa" (the one being reviewed here) is MUCH better translated - it really sounds like it's written in English. It could be that some of the factual problems were "lost in the translation" - so, like the book and the narration, the translation is great in the global sense, not so great when you get to the devil in the details.

When will Audible hire a person who can pronounce Spanish properly? There Is absolutely no excuse for his book that has words or surnames in Spanish to be pronounced improperly. When the subject matter deals with a specific topic that involves a Hispanic culture, it safe to assume that the narrator will have to say some words and some surnames in Spanish. While the narrator has a great voice and delivery, he tortures the Spanish language. It’s inexcusable. The same thing happened with the audiobook for “War Against All Puerto Rican’s” by Nelson Denis. Dear also, the narrator absolutely destroyed Spanish words. As a Latino, I think insult to the fact that a huge company like Amazon and audible can’t find it in the budget to hire a narrator or an actor who can pronounce words properly in Spanish. It’s a real shame because I really enjoy Audible. It’s a great product, but when The subject matter requires pronunciation of a language other than English, there is no reason why audible or Amazon cannot hire a narrator who can pronounce the words properly. I am really disappointed.

an ugly omelet of a book

unfortunately, I will be returning this. being an avid salsa dancer and music aficionado this book does a very poor job of putting any context and structure behind it.

a random bunch of names and instruments, countries and locations. no structure at all!