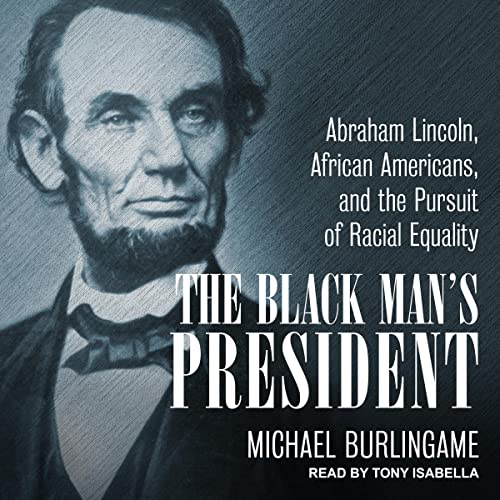 By: Michael Burlingame
Narrated by: Tony Isabella
Try for £0.00

In a little-noted eulogy delivered after Lincoln's assassination, Frederick Douglass called the president "emphatically the black man's president," the "first to show any respect for their rights as men." Douglass pointed not just to Lincoln's official acts and utterances, like the Emancipation Proclamation or the Second Inaugural Address, but also to the president's own personal experiences with Black people.

But Lincoln's description as "emphatically the black man's president" rests on more than his relationship with Douglass or on his official words and deeds. Lincoln interacted with many other African Americans during his presidency. His unfailing cordiality to them, his willingness to meet with them in the White House, to honor their requests, to invite them to consult on public policy, to treat them with respect whether they were kitchen servants or leaders of the Black community, to invite them to attend receptions, to sing and pray with them in their neighborhoods-all those manifestations of an egalitarian spirit justified the tributes paid to him by Frederick Douglass and other African Americans.

Historian David S. Reynolds observed that only by examining Lincoln's "personal interchange with Black people do we see the complete falsity of the charges of innate racism that some have leveled against him over the years."

What listeners say about The Black Man's President