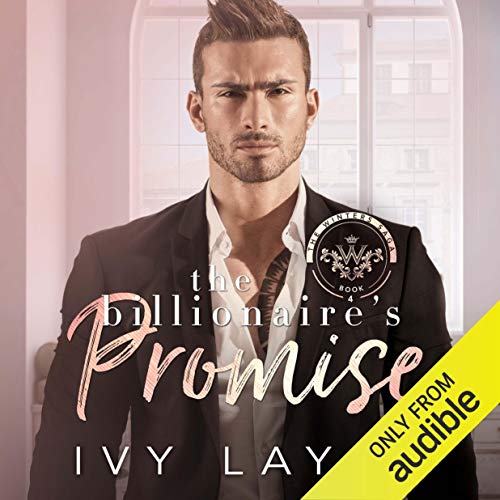 By: Ivy Layne
Narrated by: CJ Bloom,Beckett Greylock
Try for £0.00

For two years I held Vance Winters off...right up until the day my fiancé dumped me for his mistress and Vance kissed me senseless.

Vance Winters was six feet of dangerously beautiful mayhem. Wicked blue eyes, tousled blond hair, and golden skin covered in tattoos. Trouble. I should have taken one look and run in the other direction. I should have told him to take his job offer and shove it up his tight, perfect ass. I should have done a lot of things.

I won't lie. One touch of Vance's mouth to mine was better than all four years with my ex. I was tempted. So very tempted. Tempted, but not stupid. How many women had I escorted from his bed in the two years I'd worked for him? Vance didn't do commitment and I'd been tossed aside one time too many. There was no way I was going to throw my broken heart at his feet, even if I suspected the orgasms might be worth it.

Then she showed up. Rosalie. Only three months old, and she changed both of our lives in an instant. I could resist Vance when he was just my billionaire playboy boss. But could I keep my heart safe as I watched him fall in love with his daughter?

The Billionaire's Promise is a standalone romance with a happy ending. It's the fourth book in the Scandals of the Bad Boy Billionaires series and reveals more about the notorious men of the Winters family. You can listen to it on its own, everything you need to know is explained, but once you get a taste of the Winters men you'll want to listen to the others.

What listeners say about The Billionaire's Promise

gave up on book could not stand the awful squawking, grating, women's voice. never realised before what a difference a bad voice makes to a story. I did try to stick to story. but gave me a headache..

I like the story but I just hate how the female just assume things or do not talk things out. To me its immature. Such low self esteem they fill not worthy or capable of taking thing as a grown up.

Magnolia's business degree didn't quite cover all that her new boss Vance wanted her to do.. because the drool-worthy charismatic Playboy Billionaire businessman/Artist had a long list of things he expected from his new PA.. and her first job of the day was to get rid of his random nightly hookups. And, over the course of a couple of years, Magnolia did her job well, Vance and her became good friends, she resisted Vance's very 'abundant' charms and continued to date her loser/user boyfriend. Vance drank to drown the bloody memories created by his parent's brutal murders when he was only eight, and then his Aunt and Uncle's equally brutal murders shortly after. Vance's drinking eventually became an addiction and when one of his hookups nearly died of an overdose suddenly things weren't ok anymore.

Vance went to rehab and came back a changed man.. exercise had replaced the drink - however what was still there was his attraction to the off-limits Magnolia.. but then she became single again and Vance watched and waited for his chance. But before he could make his move Fate came a knocking at his door with a three month old daughter Vance never knew he had (no spoilers as it was in the summary) and seduction was lost to diapers, bottles, whispers and his tiny daughter's well-being. They'd become best friends and Magnolia quickly stepped in so together they learned how to be parents - however Vance still desperately wanted Magnolia and eventually he took his chance and their easy chemistry ignited. But a few words from the wrong people had Magnolia doubting, disillusioned and distraught because, after confronting Vance about his/her feelings, there was only one option left.

A very enjoyable well-paced storyline with a slow to develop romance. They were both well developed characters - Magnolia was in denial about her true feelings for Vance and he was far too cautious when it came to choosing the right time for seduction. It was sweet and funny to hear how Vance and Magnolia coped with baby Rosie's needs. There were tender scenes, passion, humor, sex, character development as Vance goes from manwhore to devoted dad, there's a manipulative ex and a little bit of angst in a love story that was primarily told from Magnolia's POV. Good narration by both narrators.. but I wish more chapters were done by Beckett Greylock who has a sexy swoon-worthy voice.

Worth a credit? I think this has been my favorite love story from the Winters family so far.. and YES creditworthy.

Another’s Outstanding Frantically Story, By lvy Layne. I Really In Enjoyed Listening To The Story By The Narrated CJ Bloom, Greylock. A Beautiful Storyline By The Arthur!😀

I had avoided this book in the series because I generally hate the man whore trope. I also tend to dislike the surprise baby trope....especially if the mother of the baby is someone other than the heroine.

Somehow, Ms. Layne managed to flip these tropes on their ears to make them not only palatable, but touching, endearing and sympathetic. I didn’t hate Vance for his weaknesses. And I was so proud of him when he got himself together. The way his alcoholism and recovery was handled was wonderful. I especially appreciate that it was clear that it would be a lifelong struggle, and that he had learned coping mechanisms that made us feel confident that he really could keep himself on track.

And I respected the heck out of Magnolia. It made sense that she avoided entanglement with Vance for the first couple of years.

While she tells herself that she was weak because she put up with her lousy fiance for so long, she never really does come across as weak. She tolerated him when she shouldn’t and allowed him to take advantage of her, yes. But she really was just in a “comfortable” place where she just couldn’t be bothered to move on and was unwilling to give up on the fantasy of what the early parts of the relationship had caused her to hope for. She wasn’t ready to cut her losses yet, but she was clearly gearing up for it for some time.

She was definitely strong with Vance. She was supportive and kind, but not a pushover and not codependent.

The intimate scenes were sexy as anything, but as is usual with this author, there is also that underlying sense that the couple is making love and that emotion is the basis of the act which makes them poignant, as well as hot.

Narration was amazing, as always. The male narrator gives Vance real personality. Often you hear the laughter in his voice or the heartbreak or irritation or exhaustion. Definitely the love. I wonder if the guy is a parent because the scenes talking about the baby sound so crazy real it makes me feel like he understands parenthood. The author definitely wrote newborn parenting realistically, but with humor.

I enjoyed this early, but it just fell a little flat midway and late for me. Maybe I’ve just heard enough of this series for now and need to take some time off before listening to the rest of them :-).

Worth the credit. The narrators where made for the role east to follow and loved it

I really enjoyed reading this book. I look forward to reading more books by this author in the near future.

This is the best one in the bad boys billionaire series so far, in my opinion! Love the story line of this one.

I love this story.,. Always fin, exciting and happy ending. I also love how the love for famiky is constant with thr Winters and theyre stories overlapped.

l liked that the story didn't drag on and the narrators were great. Funny too.