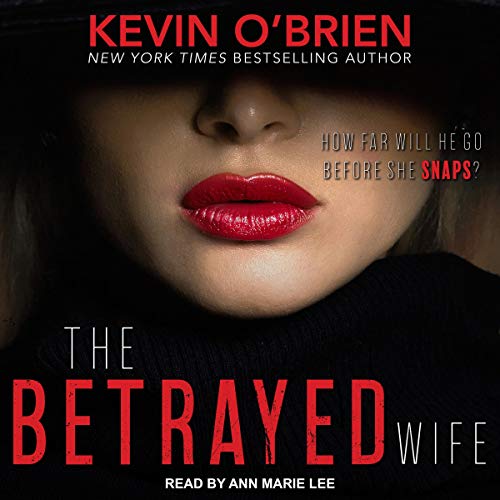 Sheila O'Rourke has always known her husband isn't perfect. Who is? But things have been better since they moved to Seattle to make a fresh start. So much so that when 16-year-old Eden turns up, claiming to be Dylan's child by another woman, Sheila tries to be welcoming.

At first, Sheila feels sympathy for the girl. Eden's mother recently fell to her death in an incident with unsettling parallels to Sheila's past. Still, Eden is a difficult house guest, sowing discord among the family. Sheila has already been on edge for weeks, receiving anonymous texts, noticing odd noises coming from the house next door. And that's just the start.

Sheila wants to trust Dylan. She wants to feel safe in her own home. But no one can hurt you more easily than the ones closest to you...the ones you keep believing until it's too late....

What listeners say about The Betrayed Wife

I really like Kevin O'Brien and like most everything he writes. I have mixed feelings about this book.
If you have read the publisher's summary you basically know the plot. That part is very good. It's the characters I would like to throttle!!
First, the husband. This man doesn't need a zipper on his pants, just give him an open fly. He has one illegitimate daughter (conceived while he was married), multiple affairs. When the illegitimate daughter comes home to roost what does dear old dad do? He finds a woman at his gym to fall head over heels about. When a meeting with gym lady goes awry because he has to meet with new daughter's teacher. What does dad do? SLEEP with the teacher.
Mom. She's aware of many multiple affairs by her husband. Ok, she left him once but returned. When hubby's daughter comes to live with them, mom tries to make her feel welcome. She finds spiders in her bed, Visine in her juice, washing machine shorts out and she's almost electrocuted and finally ground glass in her bourbon. Don't kick her out, try to set a trap and find out more about her background.
I won't bother getting into the kids.
Are there really people out there like this?
The ending kinda makes up for the rest of the book but...
Ann Marie Lee does a very good job narrating.
RECOMMENDED for entertainment, not believability.
If you found this review helpful please indicate so.
Thank You.

Entertaining But Characters Were Unbelievable

NO SPOILERS! This book was entertaining but I could see the plot from early on. The issues I had was with the writing and narrator. The author had a teenage kid calling another kid a “drip.” I don’t know of any teenager that use old fashioned terminology. The main characters were parents of young children and teens but talked like they were in their sixties. They made musical references that many in their 40’s wouldn’t get. It just made no sense, parents with kids that age would be in their 40’s. It was just annoying.

Also the narrator sounds like an old lady. Maybe that is what the author was aiming for but it just didn’t work. The main character is very flaky too. Maybe I just don’t get it, perhaps the author thought he was on the pulse of “soccer moms”.

Other than that, I was mildly entertained.

This was a good story but the main character is such a doormat and the narrator almost made me stop listening!

The narrator was horrible. . .

From the beginning I just couldn’t get into the story because the narrator was so annoying. Her reading the story simply made it unbearable. I’m sure I wouldn’t be a great narrator and I hate being critical but it was awful!

This story was awesome! I couldn't stop listening!!! There are a ton of twists and turns but not a ton of characters which makes it easy to follow. I really enjoyed the narration too.

Story line was really good but I had a really hard time with the narrator. She sounded like she was too dramatic; like she was trying too hard

sorry but I could not finish this audiobook because this was the absolute worst narrator I've ever heard. she narrated this book as though she was reading an adventure story to a bunch of small children and that made it really creepy to listen to considering the subject matter of the story. Sorry I couldn't write the story I just could not continue listening. I got as far as the body plunging off the roof and she read it like she was describing a play date in the park for the kiddies.

I really enjoy this author. Have read his books back to back. There is suspense all around. Kevin O'Brien is my new favorite author!

Great book, I really enjoyed it.

Kevin O'Brien is a great author, I have been reading/listening to his books for years, he never disappoints.