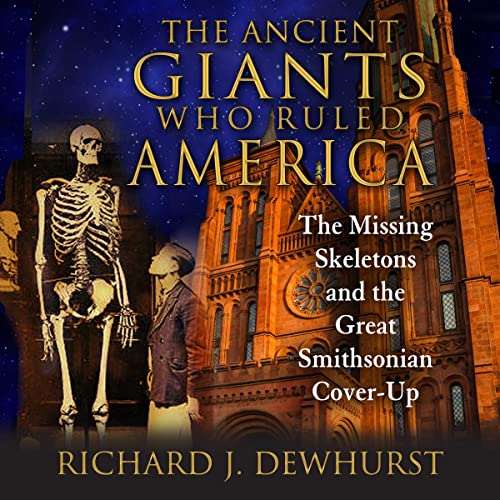 The Ancient Giants Who Ruled America

By: Richard J. Dewhurst
Narrated by: Nick McDougal
Try for £0.00

A study of the substantial evidence for a former race of giants in North America and its 150-year suppression by the Smithsonian Institution. It:

Drawing on 400 years of newspaper articles and photos, first-person accounts, state historical records, and illustrated field reports, Richard J. Dewhurst reveals not only that North America was once ruled by an advanced race of giants, but also that the Smithsonian has been actively suppressing the physical evidence for nearly 150 years. He shows how thousands of giant skeletons have been unearthed at Mound Builder sites across the continent, only to disappear from the historical record. He examines other concealed giant discoveries, such as the giant mummies found in Spirit Cave, Nevada, wrapped in fine textiles and dating to 8000 BC; the hundreds of red-haired bog mummies found at sinkhole “cenotes” on the West Coast of Florida and dating to 7500 BC; and the ruins of the giants’ cities with populations in excess of 100,000 in Arizona, Oklahoma, Alabama, and Louisiana.

Dewhurst shows how this suppression began shortly after the Civil War and transformed into an outright cover-up in 1879 when Major John Wesley Powell was appointed Smithsonian director, launching a strict pro-evolution, pro-Manifest Destiny agenda. He also reveals the 1920s’ discovery on Catalina Island of a megalithic burial complex with 6,000 years of continuous burials and more than 4,000 skeletons, including a succession of kings and queens, some more than nine feet tall - the evidence for which is hidden in the restricted-access evidence rooms at the Smithsonian.

“This is the most comprehensive and level approach to the subject of giant humanoids in Earth’s past to have ever been published. The most appealing aspect is that Dewhurst has collected a vast array of primary sources and presents them here. Reading one newspaper discovery after another of giant skeletons and artifacts is perhaps the most compelling reason to question the standard lines we are given about humanity’s origins. When coupled with his persuasive theories explaining why the Smithsonian would actively cover up such discoveries, you have one valuable and entertaining read! Highly recommended.” (Robert R. Hieronimus, PhD, author of Founding Fathers, Secret Societies and host of 21st Century Radio)

“Giants in ancient America? You bet! It’s all here in Richard Dewhurst’s fabulous book. Extensively illustrated and chronicled with firsthand accounts from early 19th- and 20th-century news clippings, this book will shatter the mainstream academic teachings that continue to ignore and cover up the role giants played in early American history.” (Xaviant Haze, author of Aliens in Ancient Egypt and coauthor of The Suppressed History of America)

“At last, a comprehensive sourcebook that demystifies the giants of ancient America. Lavishly illustrated, this goliath and gutsy book delivers an unprecedented wealth of information on the great mound builders. Dewhurst digs deeper than the rest. Don’t miss it.” (Susan B. Martinez, PhD, author of Lost History of the Little People and The Mysterious Origins of Hybrid Man)

What listeners say about The Ancient Giants Who Ruled America

I should of read closer before getting this book. While it is interesting material it is literally 13 hours of readings of quick newspaper clips about giants from the last couple hundred years. I have never not finished a book but at hour 8 or so I am seriously considering cutting my losses. Just know what you are getting into.

this book gives people the opportunity to learn some of the magnificent history of our planet, not the Darwinist theory from 1860 that is still being taught to the children (and is even twisted from what Darwin intended). I cannot confirm the authenticity of these accounts, the same as i cannot prove all the pictures and documents are inauthentic. However, the shear volume of records leads me to believe giants did exist, and that the Smithsonian has instrumented destroying the evidence and shaping what is accepted as '"Truth". The real truths will come out soon.

Narration was ok. Perhaps some review on the pronunciation of sepulchre. Otherwise good for conveying information.

The writing seems somewhat disorganized: it not chronological, alphabetical or geographic.
The narrator's voice is pleasant enough, but he mispronounces so many words that it is a bit annoying.

I loved the volume of information and written documents covered in this book. The reader had an extremely calming voice, tone, and rhythm that put me to sleep many nights traveling. The downside was the volume of articles being read and multiple accounts of the same discoveries. All and all you must really be interested in giants to complete and stay awake.

I found this entire book so intriguing that I purchased a paperback for my collection.

The subject matter is fascinating, with my only problem with this audio book being that the narrator reads so slowly.

Bodies of giants were discovered in caves under massive amounts of Bat Droppings, which preserved them very well.