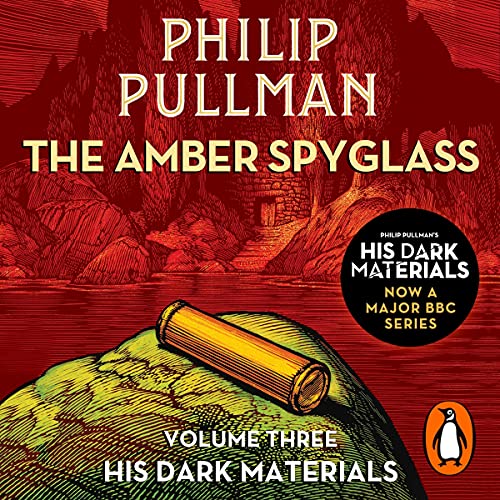 From the world of Philip Pullman's His Dark Materials - now a major critically acclaimed BBC series.

Will and Lyra, whose fates are bound together by powers beyond their own worlds, have been violently separated.

But they must find each other, for ahead of them lies the greatest war that has ever been - and a journey to a dark place from which no one has ever returned....

Read by Philip Pullman and a full cast of narrators.

What listeners say about The Amber Spyglass

Absolute dogturd of an ending

So much left unfinished. So many loose threads. Maybe the author should have left all the other writers work out and put in some more of his own. Worst dogturd ending of any book series yet.

Awesome in The Truest Sense of the World

I would like to thank Penguin very much for producing such an amazing rendition of all the three books of his dark Materials trilogy. Philip Pullman reads it beautifully. I first read the trilogy years ago and loved it but when I listened to this recording it brought the books to life. The story is so psychedelic and surreal. No words can truly describe how absolutely outstanding this trilogy is.
However, I am deeply disappointed that the actors who played their parts beautifully were not credited. I would’ve loved to have known who played each part. PLEASE rectify this.
Listen to this recording. You will NOT be disappointed.

Very entertaining and well preformed by all the cast, however the story falls off a cliff in the last 2H! so disappointed as was great up to then

Brilliant conclusion to the trilogy.

Despite a gut wrenching ending, Mr Pullman's masterful storytelling remaind deeply compelling and hugely satisfying. can't wait to get on to the Book od Dust.

I love this story

I have read the books and thoroughly enjoyed the listening to it, I might listen again one day

Philip Pullman is so good at drawing you into the narrative, which he does successfully until the last 2 hours or so. Suddenly it was like he realised he had somewhere else to be and so rushed the final chapters. They lacked his descriptive text and usual attention to detail. So many loose ends - perhaps he's planning on a spin off or sequel. Left feeling disappointed.

The story and cast were amazing. Fantastic and somewhat sad conclusion to thr series .