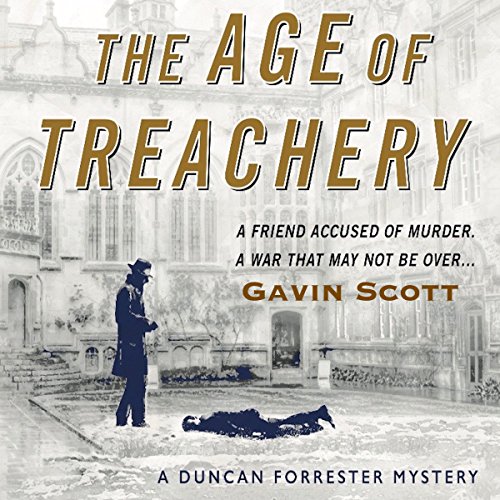 The Age of Treachery

It is the winter of 1946, and after years of war, ex-Special Operations executive agent Duncan Forrester is back at his Oxford college as a junior ancient history fellow. But his peace is shattered when a much-disliked Fellow is found dead in the quad, stabbed and pushed from an upper window. A don is suspected and arrested for the murder, but Forrester is not convinced of his friend's guilt. On the hunt for the true killer, he finds himself plunged into a mystery involving lost Viking sagas, Satanic rituals and wartime espionage.

What listeners say about The Age of Treachery

I often feel under-impressed when authors try to read their own work, but Gavin Scott has read this book with perfect narration. In fact, I think his reading enhanced the story because he reads so well.

This is a very interesting mystery , in which Duncan Forrester has returned as a history don to Oxford College, after serving in WWII. He wants to find the actual murderer of a friend of his, and his efforts to do so lead him even to Scandinavia, where he is trying to understand how ancient Viking sagas might have played a role in Hitler’s treachery, as part of his search for the killer.

I loved all the historical details, the characters were well drawn, and the author even included some actual figures, such as Tolkien and CS Lewis. I eagerly look forward to reading the next book in this series, and highly recommend this one. It is a fast-paced story, with wonderful details and literary references that made it a cut above the average mystery for me.

If you could sum up The Age of Treachery in three words, what would they be?

Gavin Scott delivers an intriguing mystery which unfolds in beautifully written and detailed prose. Engaging characters are skillfully woven into the background of post-war England, mystery and Oxford politics. The protagonist, Duncan Forrester, is a likable hero with an unwavering sense of moral values. The type characters readers will enjoy following.

"The Age of Treachery is bound to have great appeal to lovers of literary and historical fiction.

What made the experience of listening to The Age of Treachery the most enjoyable?

I wonder if the author as narrator means that we hear the characters just as intended. The book was wonderful - I've listened over and over.

I am looking forward to the next in series

It wasn't a waste of time

Would you be willing to try another book from Gavin Scott? Why or why not?

Yes, It was entertaining but predictable.

Have you listened to any of Gavin Scott’s other performances before? How does this one compare?

Never listened to him before but he did a good job.

Did The Age of Treachery inspire you to do anything?

What a wonderful story. The characters are engaging and the story line moves along at a good clip. There are many twists and turns the end was a surprise to me. Hearing the descriptions of what Germany looked like after WWII reminded me of stories my Dad told. He also described the mounds of rubble and how people were removing it by wheel barrows.