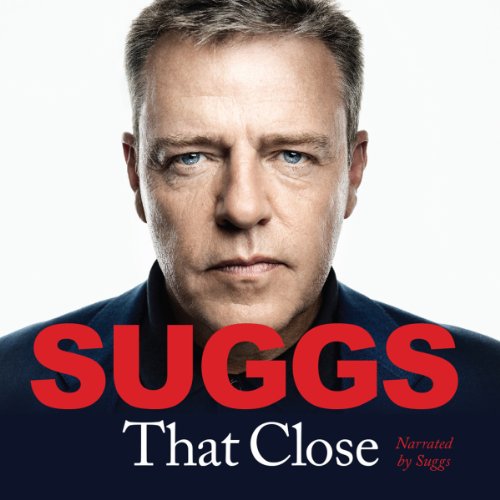 Suggs is one of pop music's most enduring and likeable figures. Read by the author himself with the assured style and wit of a natural raconteur, this hugely entertaining and insightful autobiography takes you from his colourful early life on a North London council estate, through the heady early days of Punk and 2-Tone, to the eighties, where Madness became the biggest selling singles band of the decade.

Along the way he tells you what it's like to grow up in sixties Soho, go globetrotting with your best mates, to make a dead pigeon fly and cause an earthquake in Finsbury Park.

What listeners say about That Close

Would you consider the audio edition of That Close to be better than the print version?

What other book might you compare That Close to, and why?

Rock autobiographies, social history books - because that is what it is

Which character – as performed by Suggs – was your favourite?

It was the cat what made me do it

I've always been a fan of Suggs - he's so down to earth and loyal to his roots - and, of course, a great singer/songwriter.

I adored the 'rude boy' charm that came across so well. This is a cheeky, funny, really entertaining book, and Suggs is so humble it's obvious he is a truly, lovely gentleman. It's interesting to listen to, as Suggs has the soul of an urban poet, and a brilliant way of utilising words.

I appreciated that it was narrated by the author, it really made the book come to life.

The life of a "National Treasure"

Having just watched Suggs at the Garrick Theatre delivering a monologue and music, I was slightly disappointed to hear word-for-word the same sections within the book. However, it was entertaining and had me listening to it over a short amount of sittings.

Ending? Not sure an autobiography actually ends but how it finished was slightly disappointing. It was as if he had made it to the promised word count and fired it off to his publisher. The clever circular narrative of the live performance involving the singer's search for his dead father and inner-meaning to life lingered longer in the mind than a quick anecdote about being the last band to play at the BBC Television Centre.

Which character – as performed by Suggs – was your favourite?

Suggs himself. He managed to chart the amazing success of Madness without giving off an air of smug gloating. He came across as genuinely suprised at his achievements. Proud but humble.

Could you see That Close being made into a movie or a TV series? Who would the stars be?

Well it did make the Theatre, but it won't be commissioned as a film. I'd much rather see the Richard Curtis penned sitcom - mentioned in the book - in which the prime minister is kidnapped and Madness are installed as interim leaders of the UK.

I think Suggs's decision not to use a ghost writer on this autobiography largely paid off. I've read a ton of celebrity biogs and most read like they've been constructed around a couple of interviews recorded onto a dictaphone and then padded out into a book. Suggs is a natural raconteur as he has depicted in his lyrics over the last three decades. It's not clear if he hired the services of an editor, because the chapter on the history of Ska and the singer's recent take up of serious cycling felt like padding and should have been cut. I enjoyed learning that the school his school fought against every term was my school. Listening to Baggy Trousers will never be the same again!

Suggs man behind the Madness

Excellent whimsical biography Suggs. It is a very humerous and interesting story that just asks to be binge listened too. I don't normally listen to biographies for fear of being stuffy and boring. Suggs however makes for an interesting audio book.

If you could sum up That Close in three words, what would they be?

Its a heart warming, gritty but funny story of one of Britains best loved singers from a true British institution. The story weaves its way from growing up and moving to Wales .. To coming back to London becoming Suggs that we know and love. Weaving its way from the early days of Madness.. Chasing cheese down a hill to earthquakes In Finsbury Park.

Suggs is the obvious favourite, you want him to succeed and sometimes you feel sorry for him

Have you listened to any of Suggs’s other performances? How does this one compare?

loved the book, even though Suggs spoke very fast reading I would totally recommend it

Loved it when he laughed at his own jokes and tried some accents. Excellent book, excellent narration

love suggs very funny can relate to much in book as of same age.
from similar area in fact moved around in same area's camden , hampstead, anyway jolly fine listen.

Really enjoyed it but was it me or does some bits get left hanging? Madness break up, goes on lots of trips abroad in the 90s then jumps back to getting married in the 80s about 6 chapters later. Bit odd.

narrator was funny as its the reason I got it,Plus I share it too with family

HEY YOU! DON'T LISTEN TO THAT, LISTEN TO THIS! If you love Madness you will love the book. Nutty stories, great narration.

Welcome to the house of fun

If you've seen Suggs' one man show "My Life Story" then you'll already have a lot of the information he imparts here, with a few exceptions. However, it's still well worth the price of admission because, whether you're a fan of Madness or not or even if you have no idea who they are, Suggs has a fun and humorous style to his narration and his experiences are related in an equally enjoyable manner. You don't have to like him, or know him, to gain a smile from this book.

Hey you! Don't read that! Listen to this!

This lively memoir of Graham McPherson, a.k.a. Suggs of British pop legends Madness, is a must-listen for all fans of the band. It's brimming with picaresque anecdotes and against-all-odds success stories engagingly told in Suggs' own distinctive voice. He's a born storyteller, and indeed several of the tales in this book are quite familiar from his interviews and stage chatter over the years. Hearing him spin his yarns in his London accent, peppered with self-deprecating chuckles and groans, is far superior to reading his words in cold print.

Following the opening chapters on his childhood, Suggs gets down to business with the formation of Madness and their wild career as the U.K.'s top singles band of the 1980s. Here it gets a bit disconcerting as Suggs seems to skip past key events of Madness history, but then it turns out he's not going in strict chronological order. He hops back and forth in a stream of consciousness manner, which after all is more like it would be to hear him chatting about the old days over a pint at the pub, instead of proceeding in a strictly organized documentary fashion. Just be patient and eventually he'll hit all the old familiar bits of Madness mythology. He also recounts a number of lesser known experiences, such as a ramshackle bicycle tour of Italy, and a spiritual odyssey up a banyan tree in Jamaica, which is unexpectedly poetic and beautiful.

If you're not aware of or interested in Madness and its lead singer, this is not an audiobook for you. Go listen to One Step Beyond or The Liberty of Norton Folgate first, then come back here if the music catches your fancy. Any fan of Madness "Absolutely" needs to listen to this. I selected That Close with my first free introductory credit on Audible, and I imagine I will re-listen to this many, many times. Cheers to the great man Suggsy!

pure genius..written and read by a genius

the cool and calm melodical voice of suggs makes listening to this book an absolute pleasure.filled with fun laughter chaos and macness this book takes you back to times of youth and teenage bungling..thank you suggs your a gem