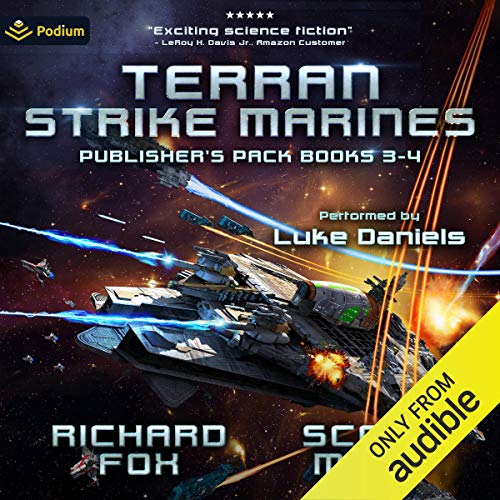 By: Richard Fox,Scott Moon
Narrated by: Luke Daniels
Try for £0.00

War has come to Syracuse, and only one team of Terran Strike Marines can save the planet. They are Valdar's Hammer.

Admiral Isaac Valdar leads the Breitenfeld, and a fleet of Dotari allies, in a last ditch attempt to break a Kesaht blockade over the human colony. Failure means the death of millions - but the aging carrier, and her commander, have a reputation for miracles.

Outnumbered and outmatched, Valdar sends his elite Strike Marines into the breach. Lieutenant Hoffman must lead his battle worn troops into the heart of a shattered moon on a desperate gamble to turn the tide. But fighting alongside the Dotari is its own challenge, and the Kesaht aren’t the only enemy to deal with....

The Beast of Eridu, book four:

An ancient beast awakens, and only Lieutenant Hoffman and his Strike Marines can put it down.

On the sweltering jungle world of Eridu, hidden in an ancient vault is an artifact which will change the course of the war against the ever-encroaching Kesaht armada. But guarding it is a deadly creature, a beast with the ability to destroy any technology it encounters. When modern equipment fails the Strike Marines, and with the fledgling human colony on Eridu under threat, they must turn to an a hero of the Ember wars and a tracker without peer.

The Ember War universe is going to change forever.

I have really enjoyed the Terran strike marines Spin off series from the Ember war Saga by Richard fox and prefer the bundle publisher packs which makes for easy continuity in listening. The narration style is good and an easy listen. Not going to give any spoilers all in all its an excellent space action yarn but book 4 did leave a bit down on the tactical side of situations that was present in the previous books. Not sure if this was down to poor advisement to the author on situations or edited due to word counts etc. Didn't spoil the story but was noticeable after listening straight after book three. If you are not from a military background ignore what i have just said and listen to what i can best be described as DieHard mixed with Aliens in space.

I do however recommend starting at the beginning of the ember wars saga and working your way through for some of the character back stories and settings. Its a rich environment and you wont be disappointed.

I've seen some reviews knock the narrator's accents etc and whilst their Basque accent is off I really enjoy the overall performance, I think he captures the character's personality perfectly. The story itself is great, my only hope I'd that the series continues to develop its universe.

Book 3 is wonderful, Book 4 began letting me down

Book 3 is wonderfully done, there's action and reaction. But overall nobody felt like idiots,
Now that cant be said about Book 4 which is primarly why i'm writing this review. Book 4 leaves a bad aftertaste of "Sudden incompetence" in multiple cases like, Failing to report a hostile force on a presumed peaceful planet, failing to report hostiles inside the base. And then i think my biggest gripe is that the main story seemed so intersting, and it's the worst that it basicly got religated to be a simple obstacle that just so happens to only be a problem for the main caste.

I reccomend Book 3, but not book 4

This is a very good series. I have enjoyed but come to the end. Please keep writing, and I will keep listening.

Great continuance to a great series

I really love the characters, especially how Luke Daniels portrays them Just fantastic. Book 3 was great, but but book 4 felt kind of left field. Still entertaining, but I felt like it was a filler story.

Good story but voice acting was over the top.

I like the story and enjoy most of the characters but the parts with Bear and the other guy seem like they came right out of a 1950 tv show. The voices took me right out of the book. some of them for the main team are over exaggerated as well.

Book 4 Great, Book 3 a little slow, monotonous during the middle

Book 4 Great, Book 3 a little slow, monotonous during the middle. Overall, a great series along with the Armor Corps Thread that has storylines interwoven.

I dig the entire series. I do with there a was an Armor unit consistently in the the book but that is my only critique.

another great book in the series if you liked the others you'll like this one!

Great continuation of books 1&2. I hate to see the end and hope there is more to come.

The story is pretty good. I found it entertaining. The thing that was hard to deal with was the narrator. I guess everyone in our future will talk a cross between Scooby-Doo and Macho Man Randy Savage. His normal speaking voice is quite good. This characters leave a lot to be desired.

This series is an emotional roller coaster, I try to anticipate what’s about to happen next only to be blindsided by what actually happens. It does the series well.

I enjoyed Valdar's Hammer quite a bit, and just a little more than Beasts of Eridu. Overall, I like the Strike Marines books quite a bit and really enjoyed these also.

Do yourself a favor and get the chronological order of the books and read them in the right order with the Terran Armor books. I didn't do that and had some out of sequence things confuse me.

loved the banter and the characters are just on point. luke daniels really puts you in the room.

futurist militaristic colonization of the stars

a very detailed read. lots of plays and things happening. mostly a fun read. never really dell in love with the characters.