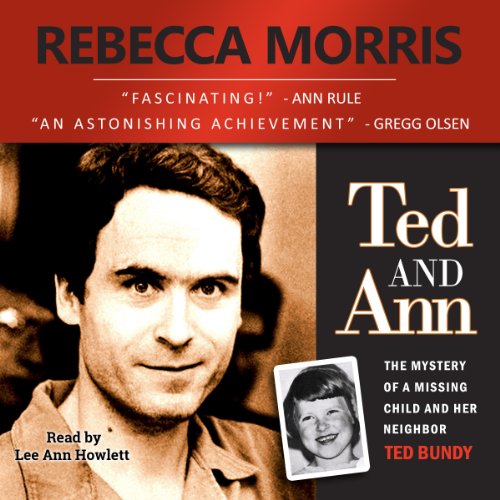 By: Rebecca Morris
Narrated by: Lee Ann Howlett
Try for £0.00

At age three he was using knives to frighten his teenage aunt. By 14 he was a thief, animal abuser, and peeping tom who liked to pull little girls into the woods to scare them.

Ted Bundy killed at least 35 girls and women, and possibly hundreds. Was his first victim eight-year-old Ann Marie Burr who disappeared from their Tacoma, Washington neighborhood in 1961? Her body was never found and there were no clues, just two tenacious detectives who spent the rest of their lives trying to solve the case. Was Bundy telling the truth when he told a hypothetical story about killing Ann and dumping her into a muddy pit?

With new information about Ted Bundy's childhood, interviews with those who knew him best, and the memories of the Burr family, Ted and Ann is the story of one the 20th century's most fascinating cold cases.

Rebecca Morris is an award-winning journalist who has worked in radio and television news in New York City; Portland, Oregon; and Seattle, Washington. A native Oregonian, her reporting has appeared in The Seattle Times, The Oregonian, People, Entertainment Weekly, New York Newsday, American Theatre, and many other publications. She lives in Seattle.

"This is the ONLY book to read to learn the full story of the disappearance of Ann Marie Burr in August 1961. Fascinating!" (Ann Rule, New York Times best-selling author)
"While Ted Bundy might be the greatest evil enigma ever, author Rebecca Morris strips away the layers of the greatest mystery of his life - what was his connection to the disappearance of Ann Marie Burr? This is an astonishing achievement, the missing piece that readers of crime have long sought. Bravo for Morris!" (Gregg Olsen, New York Times best-selling author)

What listeners say about Ted and Ann

The human cost of a serial killer

This book highlights the human cost of a serial killer's actions on a particular victim's family. Where some books about Bundy seek to almost glamourise him, this book does not. Through the narrative, the author allows us a glimpse into the world of a child victim's family. It is very well researched and also provides a view of Bundy through the eyes of people who knew him. It is both heartbreaking and enlightening, ultimately revealing the strength of the human spirit even in the most appalling of circumstances.

I have been a little obsessed with Ted Bundy as of late and really jumped on the chance to read this one. It was really well written and the amount of research that went into this shows really well. Whilst I started to read for Bundy, I was quickly overwhelmed with the story of Ann Marie Burr and her disappearance. A must-read.

*I was given this free review copy audiobook at my request and have voluntarily left this review.

Disclosure: I received this audiobook for free in return for providing an honest review.

I began listening to Ted and Ann thinking it would focus mainly on Ted Bundy. After all, I'd spent my teen years in the Pacific Northwest, where Ted Bundy was often cited as a cautionary tale for not accepting rides from strangers, no matter how attractive or clean-cut. As the book progressed, I became immersed in the story of Ann Marie Burr, an 8 year old Tacoma girl who went to bed one night, went missing, and was never found. Ann's disappearance haunted her parents throughout their lives, and suspecting but never knowing for sure whether she'd been a victim of Ted Bundy compounded their grief. While Ted and Ann offers insight into Ted Bundy's background and behavior, it shared a perspective I'd never considered before: Families who'd lost loved ones in areas where Ted Bundy had murdered others, but ultimately never found out what happened to their missing loved ones. I found Ted and Ann to be a profoundly touching book, and at times was moved to tears by the story about little Ann Marie Burr and her family's struggle to learn what had happened to her. Recommended.

At 14, Ted Bundy is believed to have chosen a young girl for his thrill of murder and hiding the body. He was never prosecuted.

When reading about anything related to Ted Bundy, it’s easy to get swept up in his story and background and about his known victims. Before this book, I never took the time to really think about what an impact he had had on Seattle Washington. There were other people who went missing during the time of Bundy’s life, and the thought that the families will never know if their loved ones were part of his spree or not is haunting.

This audiobook covers one such victim. 8-year-old Ann Marie Burr went to bed one night and simply vanished. This book covers the possible reasons why Ted Bundy is a suspect but even at the end admits that there is no way to prove for sure exactly what happened. Decades have gone by, many of the people who remember Ann have died, and they are no closer to solving her disappearance then they day it happened. Truly sad story. Interesting insight though for fans of true crime.

Narration was perfect for the material.

Ted and Ann - An Intriguing Possibility

Serial killer Ted Bundy's deviant behavior is known to have started early. But when exactly did he begin killing? At the time of his youth, in a neighborhood where he delivered newspapers, a little girl disappeared, never to be found again. Was this the doing of a young Bundy? While "Ted and Ann" does not answer this, it provides a wealth of detail on the early life, disappearance, and search for 8 year old Ann Burr, as well as local details and context, and an extensive account of what is known to have been going on in Bundy's life at the same time. In his extensive interviews before his execution, Bundy was always noticeably evasive and inconsistent about that era, and seemed to suggest little or no memory of Ann or her disappearance, despite what an enormous local news item it was at the time. And while there is no definitive link, the possibility of Bundy having abducted and killed Ann cannot be ruled out. Consider this: Even if Bundy did NOT do it, he still came of age in a time and place where the biggest local news item was little Ann's disappearance and law enforcement's inability to catch the perpetrator. Could it have started the gears turning in Bundy's maniacal brain, that HE could do such things and not be caught? "Ted and Ann" is more a tale of context and possibilities than of answers. I've seen some other reviews that complain that the book doesn't solve the crime - although if it were solved, call me crazy, but I'm guessing maybe it would've been in the news or something. The book's introduction specifies that it does not have definitive answers - did some readers/listeners miss that part? I myself read the publisher's summary and listened to a sample of the audiobook, and went into it as an informed listener who knew what to expect. And I wasn't disappointed.
Author Rebecca Morris is no stranger to true crime, although this is the first I've read by her. Narrator Lee Ann Howlett - also new to me - does a fine job of keeping the parallel stories of both Ted and Ann going. Some true crime audiobooks end up with a narrator who thinks they're an "on the scene" news reporter or something, going completely over the top. Others have a narrator who sounds completely disinterested. Howlett is a calm, clear reader who keeps things moving, and keeps you interested throughout.
"Ted and Ann" shouldn't be anyone's FIRST Bundy book, but it definitely should be read if you're looking for additional pieces of the complex, horrifying puzzle that is Ted Bundy,
Also, while surely Bundy is what pulls the readers/listeners in, poor little Ann Burr - still missing - is who will haunt your thoughts afterward, leaving you wanting answers and justice for her.
I received a free copy of this audiobook in exchange for writing an honest review.

It's not really about Ted or Ann

This book tries to tie the disappearance and probably murder of Ann to Ted but it relies on speculation and coincidence to do so rather then fact and logic.

I had bought this book thinking it would lay out, in some coherent manner, how Ted came to abduct Ann, or at least detail the evidence. It didn't, instead it speculated, talked about other possible suspects, some who were much better suspects in my opinion. I think the author used the infamy of Ted Bundy coincidence to propel sales.

Good read. Extensively researched. Well written. However, readers unfamiliar with the Bundy case may not appreciate this. Best advised start with books by Kevin Sullivan ("The Bundy Murders") or Ann Rule ("The Stranger Beside Me").

Although there are a lot of interesting stories and facts bout the Bundy's and the Burr's, any conclusions about Ted Bundy's involvement in the abduction and murder of Ann Burr is still highly speculative. The narrator unfortunately gives a very monotonous and dry performance.

Tragic yet interesting story about the connection between Ted and Ann. Well researched. Great break from "the usual" perspective of Ted Bundy. Objective and without preconception.

'Book Stranger Beside Me Instead

Ehhh, it was O-k. I'd read/listen to The Stranger Beside Me by Ann Rule instead. Ted and Ann doesn't really give any other insight on the murders or Ted Bundy.