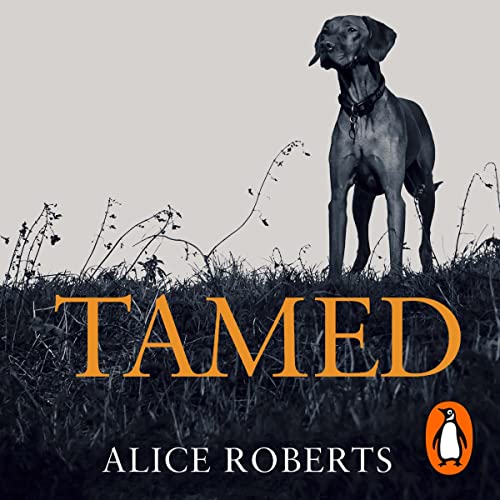 The extraordinary story of the species that became our allies.

For hundreds of thousands of years, our ancestors depended on wild plants and animals for survival. They were hunter-gatherers, consummate foraging experts, taking the world as they found it. Then a revolution occurred - our ancestors' interaction with other species changed. They began to tame them. The human population boomed; civilisation began.

She reveals how becoming part of our world changed these animals and plants and shows how they became our allies, essential to the survival and success of our own species.

Enlightening, wide-ranging and endlessly fascinating, Tamed encompasses thousands of years of history and archaeology alongside cutting-edge genetics and anthropology. Yet it is also a deeply personal journey that changes how we see ourselves and the species on which we have left our mark.

An Economist and Mail on Sunday Book of the Year 2017.

What listeners say about Tamed

Would you listen to Tamed again? Why?

Possibly I would return to particular chapters that I specifically found most interesting (more the animal chapters).

What does Alice Roberts bring to the story that you wouldn’t experience if you had only read the book?

Enthusiasm in her delivery, I would say. Though don't most readers?!

No, too much to take in, I wanted to pause between each chapter and species.

Ten chapters of social history and science - interesting tidbits in there

This came out last year, but I hadn't heard of it until I saw the Audible version advertised. It sounded like the sort of easy listen that I would enjoy and hopefully learn from, having enjoyed Roberts' television programmes.

It turned out to be a mixed bag. Absolutely fascinating on one hand, but rather long-winded on the other as a listen. The dates and delving do feel quite cumbersome when you are listening, it's hard to hold all the facts in your head as new ones constantly bombard you. But that would be easier on paper, I feel.

I did learn various interesting facts, and just considering how our species has tamed and cleverly used these animals and plants was mind-expanding. From potatoes and rice to dogs and chickens, I found it one of those non-fiction titles that I would quite have liked to see televised.

Alice Roberts herself narrates, which is no bad thing. I knew from her voice and style on TV that she'd be a narrator I would have no trouble listening to, and she was both personable and kept her clear voice light and full of enthusiasm for her subject.

Personally, I think this would be easier to follow and refer back to on paper/as an e-book, but I still picked up a lot of information from the audio version.

With thanks to Nudge Books for the sample Audible copy, provided for an honest review.

Brilliantky and engagingly read by Prof, Roberts, this book is a significantb step forward in our understanding of the animals that homo sapiens have tamed for our own use and pleasure.

I find that this book was very dense with information, in the best way possible! While it took a few rounds of listening to absorb all the new data contained within, the performance was very nice and soothing. Definitely well researched and written otherwise. Warmly recommend!

A quick romp through history and the subtle nature of our relationship with the world around us as well as our fellow humans. Well thought out and presented, this tells of the good and bad that comes to all species that chance their arm at living with humans.

Fantastically researched and written piece of work.
Wonderfully constructed and engaging narrative.
*biased review because I am ever so slightly besotted with Alice Robert's.

An amazing detailed story narrated by the author. Alice Roberts has a easy to listen to voice and the content is extensive, well researched and fascinating. This was a compelling series of stories that I have not only learnt from but thoroughly enjoyed.

really interesting and thought provoking book, finished it too soon. I love watching Alice Roberts on TV, she's always interesting and enthusiastic about the subject and this audio book is no different.

Fascinating, I really enjoyed it.

The hard science is explained well making it easy to understand. Without being condescending as some science books can be.

Just the best way to learn about them and us, how it all evolved into now

Please leave out the sermons.

An otherwise great book is sullied by the author's prejudice. She gets very preachy about GMOs and is obviously biased against any research done by a private firm. Her own bias illustrates that academics are hardly without self-interest. The last hour of the recording is not worth the time. Also, her British pronunciations of many of the words is very distracting.

this book takes advantage of very recent genetic evidence outlining the domestication of 10 different species. the genetics were presented largely as conclusions. but did identify the still present uncertainties and controversies, i.e. it does not present the actual arguments but more of a 30000 ft overview. it was well worth the time, I did not fast forward through any part. the chapter on horse domestication was among the most interesting.

Learned a lot, yet disappointed in the end

Ms Robert does a fascinating job putting together info from various disciplines to tell a story of origins and development. While using ,say, dogs , she illustrates many new and old science techniques to weave a story that is both interesting and instructive. She is a Science Communicator, and she does that well.
The down-side/ interesting aspect is her (to American ears) very British accent which sometimes distracts or confuses. She was talking about "tubers" but it sounded exactly like "cheevers"
The major flaw was in her otherwise nice melding of science and storytelling was in the end segments where she lets her own "gut" keep from delving into the science and actual experience of GMOs. Similarly, she makes a grand case for environmental stewardship yet voices hope for "the organic movement" despite pointing out one paragraph before that organic farming is less efficient (true) and that nearly all farmable land is already under cultivation (also true).

Dr. Alice Roberts is one of the best communicators
of science, history, and anatomy in our times… Well done!