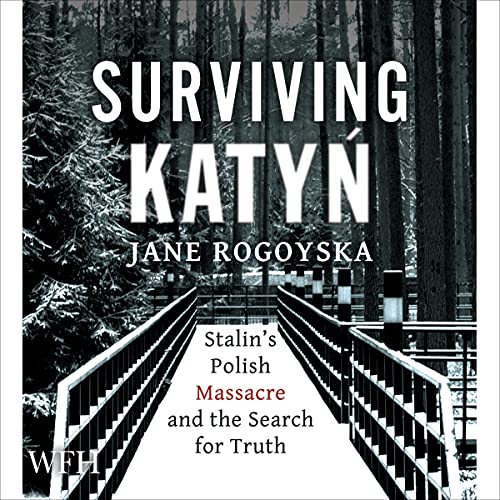 The Katyn Massacre of 22,000 Polish prisoners of war is a crime to which there are no witnesses.

Committed in utmost secrecy in April-May 1940 by the NKVD on the direct orders of Joseph Stalin, for nearly 50 years the Soviet regime succeeded in maintaining the fiction that Katyn was a Nazi crime, their story unchallenged by Western governments fearful of upsetting a powerful wartime ally and Cold War adversary. Surviving Katyn explores the decades-long search for answers, focusing on the experience of those individuals with the most at stake - the few survivors of the massacre and the Polish wartime forensic investigators - whose quest for the truth in the face of an inscrutable, unknowable, and utterly ruthless enemy came at great personal cost.

“A gripping reconstruction of one of the most gruesome and haunting crimes of the Second World War. Jane Rogoyska’s sensitive yet dispassionate use of the harrowing evidence provided by victims, perpetrators and survivors makes for utterly compelling reading, and lays bare its toxic legacy.” (Adam Zamoyski, author of Poland: A History)

“A well-researched and beautifully written narrative of the appalling fate of the Polish officers captured by the Soviets in 1939 and massacred in 1940. Through the testimony of the few survivors and the investigators, Jane Rogoyska brings to life the suffering of the Poles which continued for decades after the war as Soviet culpability for the crime was denied across the world.” (Halik Kochanski, author of The Eagle Unbowed)

What listeners say about Surviving Katyń

a remarkable and important book.

my only 'criticism ' is that this is the type of book that needs referring back and forth and so, perhaps, isn't best suited a audio format. I will be buying a text version as well.

this book is even more poignant given the current war in Ukraine.

I originally came upon this book because my father in law, now deceased, was a teen who grew up near Vinnytsia during the war years. he would NOT talk about his youth or the war. he slept with a bayonet under his pillow until his death.

now that I have more understanding of the horror of what living through Operation Barbarossa and the push/return of the Nazis and Soviets through his homescape during those years and of the nearness of the death camps in Eastern Poland. it is no wonder he couldn't speak of this. May he finally rest in peace.

A great accompaniment to the book.

I would wholly recommend this audio version of Jane Rogoyska’s book, read by herself, if you are not Polish.

Her pronunciation of names and places were invaluable to me.

It has taken me 10 weeks to finish this epic, but I am so glad that I have persevered. The detail and research is amazing, but the topic is deeply harrowing.

Jane Rogoyska has put together a historic record of the details of the secret murder thousands of Polish Officers in 1940, and the complex lies that were told by the Soviet Union’s secret police to cover up what they had done.

Linking her writing to recent revelations uncovered by historians in the past few years, the author reminds the listener,in her conclusion, of fake news and a complex spiders web of truth and untruth!

Part of WW2 history about which I knew very little.
It was interesting and presented in a very balanced way and without extreme predudice.
Our much loved polish population arrived for reasons different to the Nazi reasons that I thought

The Katyn massacre is one of the most appalling crimes in history. This in-depth study provides all one could hope to know about the crime and the aftermath. It’s truly a marvel. Jane Rogoyska has outdone herself and she narrates it beautifully. What a work.