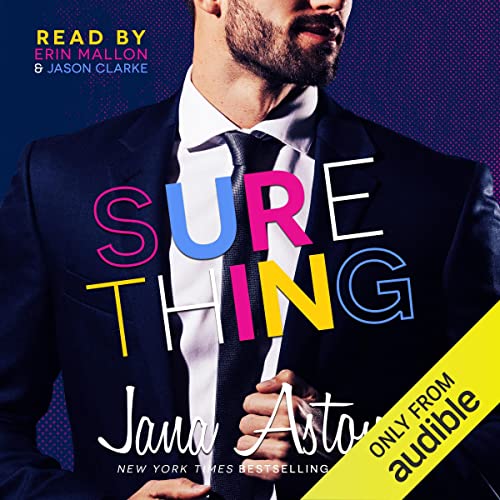 By: Jana Aston
Narrated by: Erin Mallon,Jason Clarke
Try for £0.00

Have you ever set out to have a one night stand with a sexy stranger? No? I’m the only one? Just kidding, I would never. Ever. Not usually. But then I figured, why not? My entire life I’ve been good and it’s gotten me nowhere. No job. No apartment. No boyfriend. I’m owed a little fun, aren’t I?

A reward for being good. Sure, a new pair of shoes would be more appropriate, but Mr. Sexy Stranger is more appealing. And when he speaks—in that British accent—it’s a done deal. Every American woman has a hot British guy fantasy. Well, most do. I haven't taken a poll or anything, but I’m pretty sure it’s a fact. Except. You know that saying about best-laid plans? Good, because I don’t either, but I assume they go awry. Like my one night stand.

What listeners say about Sure Thing

Great narration and a fun listen. It was like a really good romcom in audio form, with humour and chemistry. Lots of books in this genre are a bit mehh and average and it’s surprisingly rare to find a genuinely good one - but this one pulls it off.

This is a funny yet sweet audiobook from the very talented Jana Aston.
The narrators were excellent and the story was engaging.

Violet is hilarious. I love the pep talks she gives her self and her inner monologues are laugh out loud funny.
The storyline is brilliant, I love the characters and think violet and Jennings are a fantastic fit.
The narrators were easy to listen which made the story so much more enjoyable. The accents were on point and the sex scenes were super hot!
Overall a fun, hilarious and majorly hot story!

When Violet sets out to find a one night stand she has no idea the sexy British stranger would become more than just that!
Sure Thing by Jana Aston is a warm, feel good romcom that's flirty and fun with a cleverly written plot. Violet and Jennings are great characters and what ensues when a little white lie is told makes for a compelling read. I highly recommend it, you won't be disappointed.

This audio is a Sure Thing for romance audio fans!

I am a sucker for Jana Aston, her quirky humor and her dirty dirty sex scenes. If you haven't listened to her Wrong series, add them to your TBL now! Sure Thing is written in her same hysterical fashion that keeps you laughing throughout and identifying with every self-conscious and insecure moment the heroine has. Her audiobooks always can lift my spirits with their hilarity and man, are they ever HOT! They're never super angsty while still pulling your heartstrings, and unpredictable. I loved the main characters with their flaws and insecurities that make them human.

Erin Mallon is absolutely one of my all time favorite voice actors and her performances on Jana Aston's audiobooks are perfection. Perfect casting, excellent range with all her characters and her male voice remains the most realistic I've ever heard in romance audio. Jason Clarke is a new listen for me - in this accent at least! Holy British hotness! I've heard him with an American accent and his Brit accent had me fooled into checking that he was the same voice actor. He is smooth without being posh (a prerequisite for me with British accents) and brings Jennings to life.

Overall, I can't recommend this audio enough. It will keep you laughing, swooning, and, er excited in all the best ways! #auralfixation

I love all the books by this author. This was a feel good book for me, not to deep or dark or anything like that but more of a fun, happy, sexy book! I love that Jennings is British and yes he is a dirty talker too. Violet was fun and quirky, I loved being in her head when she when they first meet. This couple was fun, flirty, sweet and made me laugh. This was all around a fun Rom-Com!

The narration was INCREDIBLE!!!!! Jason Clarke with a British accent was simply perfect and Erin Mallon is amazing no matter what role she is playing! I don't think ANYONE could have done a better job with these characters.

A must listen. Absolutely loved this sexy, hot and hilarious story and the narration was off the charts!

I love this story I thought it was great sweet Charming sexy steamy and hot. about two characters who meet at a bar and a hotel they are both have a secret and to frayed or just can't say the truth. it was very cute and funny. this is my fourth book from Jane Aston the narrator's did a great job even the accent I actually enjoyed it. I hope to hear the story about the sister I'm sure I will so excited for the Nextbook. this is not an cliffhanger

LOVE IT SO MUCH I LISTENED TWICE

I love the way Jana Aston writes her books and this one is at the top of my list: it’s very sweet with hot sex that’s a great duo. A man with a accent makes everything hotter. This book was just well rounded. I just loved everything about it even the pace at which the love match realizes. Normally that annoys me but it didn’t this time. LOVED LOVED LOVED IT. Excellent Narration

Janna Aston does it again!! 😊😊

I listened to this book some months ago and was new to audible. I have since learned it's good to give and read reviews. You will make your own decision ultimately and see some negative reviews too but we all have different tastes. I was going back thru my library since I've hit the 200 mark and wanted to finally review this book. This is a spinoff of Good Girl written by Jana Aston which was fantastic and a favorite!!! And I've since learned Erin Mallon is an excellent narrator and OMG, Jason Clarke's voice gives me chills. Did I like and enjoy this book, absolutely!! I've become a big fan of Jana and learned these books are for entertainment purposes and will continue to remember that. Some of us read and listen to books for different reasons but I've enjoyed some really good books and series; this being one of them. I love trolling for new and entertaining stories!!!!

Jana you never cease to amaze me. You are one of my top 5 great authors. I love that you get the audiobook out quickly. To my knowledge, you are the only one that I know that does this. Thank you so much. Please don't ever stop using Erin Mallon. She is a great narrator for both female and male roles. For this book Jason Clarke was also great. My very favorite book was WRONG, but this book is a very close second. You have become an automatic buy for me. The story line pulled me in and did not put my audio down. I carried it with me with my ear plugs. The story line was awesome, steamy, funny great. This will be another one of an audiobook re-listen. I recommend this book highly. Don't pass it up. Thanks again Jana you are great.

It's a sure thing!! @Audioloversblog

Jana Aston has given us a book, that's, well, A Sure Thing (I know, I know)

My favorite thing about this book is Jason Clarke and his uber sexy Brittish accent... I know. I know. But when she says things about his accent and how he probably drove the girls wild, I'm like "Hell, yeah he did!"

Violet and Daisy switch places and it's probably the best thing for them! There's the unexpected in there, things that I don't give away because I vow to remain spoiler free, but let's just say that you'll need to go ahead and get ready for Daisy's book Because it is definitely a Twin Win (Also, the title of my review for that book). The title of the Actual Book is Plan B, and it's a great time! Now, about some things in Sure Thing that I will discuss-

The switch puts Violet, posing as Daisy, in a situation where she get's to pick up a one night stand at a bar. Que Jennings, our super sexy Brit who we want nothing more that to devour him with our, um, ears? I mean, It's a book and, again, Jason Clarke killed it. Anyway, she is very confident that she will never have to see him again, gives him a fake name, and who is on her tour? Oh, my, gosh! It's *drumroll* Jennings... You didn't see it coming, did you? Oh, right. So, then we have a solid several hours of Jennings shamlessly being Brittish Sexy, Violet trying to do a job that she isn't qualified while Daisy is doing God only knows what (Well, I know b/c I read Plan B before writing this). But the point is, Violet is working very hard to be a good Tour guide. Which is nice. Jennings is working really hard to hit on Daisy (who is actually Violet, but he doesn't know that) as well as hide some things from her because there's gotta be that little thing in there that has to be hidden.
The Sexy times, are pretty awesome. Lots of sweetness in there, but mostly, this is a romcom. There's a lot of fun, a little bit of drama, and so much happiness.

For more recs find us @Audioloversblog

I am new to listening/reading Jana Ashton books. I have to admit I've only done the audiobooks. I own Wrong and loved it. And since I am a huge fan if anything british like Violet, I had to get this one. So worth the credit on this one. Luckily I am able to listen to these at my job (advantage of working in cubicle at medical business office) and I think I was smiling the whole time, even stated laughing out loud. To me this is a classic chick flick with no depressing drama with a HEA. Oh and the sex was hot. I love the hot dirty sex in my books and Jennings has got a hot dirty mouth. I definitely buying more of her audiobooks, the narrator's voices were perfect. Although it helps that I was already of fan of their voices.

Good, but not special

Nice enough characters, good narration, decent story. Fun in parts, but although I just finished listening, no scenes come to mind as memorable.