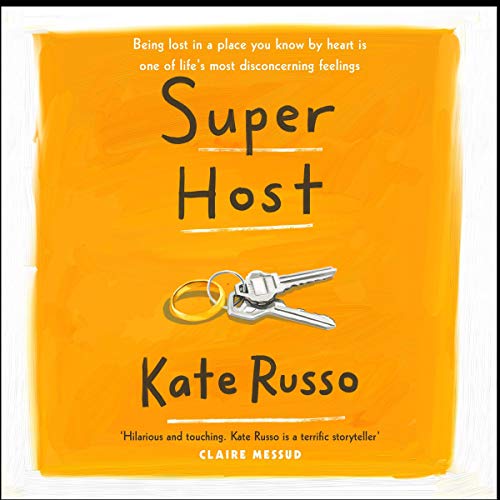 By: Kate Russo
Narrated by: James Lailey
Try for £0.00

Being lost in a place you know by heart is one of life's most disconcerting feelings.

Bennett Driscoll is a Turner Prize nominated artist who was a Bright Young Thing. Now, aged 55, his wife has left him, the reviews have dried up and his gallery wants to stop selling his paintings, saying they'll have more value retrospectively...when he's dead. So, left with a large West London home and no income, he moves into his painting studio in the back garden and rents out the house, soon reaching status as a Super Host on AirBed.

At last, the money is coming in, but he's loveless and, well, lonely. Turns out his house guests are as quirky, lost and entertaining as Bennett himself, unwittingly unlocking the parts of Bennett's life that have been forgotten to him for too long, but can they help him feel less lost in the place he knows best?

Wry, rueful and rich in observation, Super Host provides a delicious portrait of middle-age, marriage and the underlying fears and loneliness that colour so many lives.

What listeners say about Super Host

Just what I was after...

I like a book with a happy ending, I’ll be honest. What I loved about this book, it not only could I not predict the end, but I didn’t even know what I wanted the end to be.

The book moves between characters’ perspectives, some more likeable than others, but all of them engaging. I would definitely recommend this read.

I downloaded this book as I needed a light listen while I was pulling apart my wardrobe to make way for a replacement. It was perfect book for the job- entertaining, decent characters, great narration. I think my only complaint is the ending felt a bit rushed and personally I was disappointed that the main character chooses the woman I liked least....and we don’t get to hear how his exhibit turns out! This is the reason I only gave it a 4. But I did enjoy the book and the narrator. Worth the listen for some lighthearted entertainment.