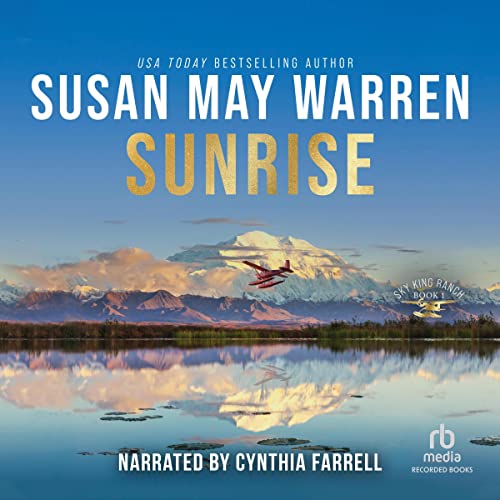 By: Susan May Warren
Narrated by: Cynthia Farrell
Try for £0.00

Pilot Dodge Kingston has always been the heir to Sky King Ranch. But after a terrible family fight, he left to become a pararescue jumper. A decade later, he's headed home to the destiny that awaits him.

That's not all that's waiting for Dodge. His childhood best friend and former flame, Echo Yazzie, is a true Alaskan - a homesteader, dogsledder, and research guide for the DNR. Most of all, she's living a life Dodge knows could get her killed. One of these days she's going to get lost in the woods again, and his worst fear is that he won't be there to find her.

When one of Echo's fellow researchers goes missing, Echo sets out to find her, despite a blizzard, a rogue grizzly haunting the woods, and the biting cold. Plus, there's more than just the regular dangers of the Alaskan forests stalking her....

Will Dodge be able to find her in time? And if he does, is there still room for him in her heart?

Sunrise is the first explosive volume in a new nail-biting series from USA Today best-selling author Susan May Warren.

What listeners say about Sunrise

Struggling to listen to the narration. I want to return it. I tried for 2 chapters.

Ends with a cliffhanger

Like most listeners, I don’t like cliffhangers.
Also, the book started out really slow. I was getting ready to stop and return it. I’m so glad I didn’t.
From chapter four on, I hated hitting the pause button.
This book grabbed me. Now I have to hope that book two is available.
Cynthia Farrell did a fantastic job with the narration.

I liked the story, but Ididn't enjoy the narrator in the audible version.
I couldn't figure out WHAT was going on in the last few minutes of the book - was anyone else able to figure it out?

Love the way Susan May Warren tells a story!! This new series is AMAZING! Tying in new and old character references throughout was just genius. The narrator, Cynthia Farrell, is very talented and worked on numerous books by Ms. Warren with technical finesse. I totally recommend this phenomenal team effort!! I just have to wait until June 2022 for the next book. 😳

If I could have given more than five stars, I would have! All the way from the storyline to the performance, I didn’t want the book to end. The only negative is that the sequel won’t be releasing until June!

I enjoyed the story mostly. I will not listen again, though, because it is too preachy for me. I tried the series and they became more and more preachy as time went on. This ruined the series for me. I did not even finish the last one. If this does not bother you, I think you will really enjoy this. It was clean and well written. The performance by the narrator was very good. Unfortunately I was disappointed. I really wanted to love this series. In light of my experience, it would have been better if this book did not end on a cliffhanger. Then the story would have felt more complete without the rest of the series, however being uncomfortable with the other books left this one feeling a bit unfinished.

I know this was supposed to be a feel good book, but it was a flop. Not much for plot, a lot of 'just trust god' in a non-realistic story.

Gave it a try

I enjoy Susan May Warren and thought I would try doing an audio version of this book. With Susan's heroes that are larger than life and so manly, I just couldn't get into the narration. I thought Cynthia did a good job, but - for me - the male voices all sounded pretty similar and more like a 12 year old boy trying to sound tough. I'll stick with Susan May Warren, as I've been a fan of hers for years, but I'll stay with reading her books. Unless she offers a male narrator . . .

I have enjoyed every other book that I have read of Susan May Warren, but this one seemed like it was forced together. It felt like a bumpy ride on an airplane. The pilot was forcing the plane to stay on course and you made it to the destination but it was questionable for a while and not an enjoyable ride.

This first book in Sky King Ranch series doesn’t disappoint. As always, Susan May Warren blends faith, hope and redemption into the story with characters who are flawed and so relatable.