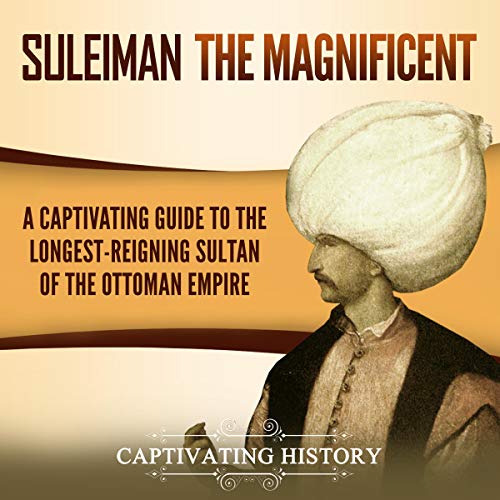 Suleiman the Magnificent: A Captivating Guide to the Longest-Reigning Sultan of the Ottoman Empire

Explore the captivating history of Suleiman the Magnificent!

Suleiman I probably knew of other monarchs and celebrities we might recognize: Ferdinand and Isabella II of Aragon; King Henry VIII and his infamous trail of wives; and Charles the V, the Holy Roman emperor who dressed in black for the majority of his life. Columbus had set off to sail the ocean blue just two years before Suleiman’s birth. William Shakespeare was just two years old when Suleiman died, as was Galileo Galilei.

During his reign, Suleiman the Magnificent guided the Ottoman Empire through its golden age of trade and expansion. His reign changed the face of the world and the lives of millions of people, and his name echoes down to us in the present day. Suleiman the Magnificent wasn’t quite like any other sultan before or after him. This audiobook explains why.

In Suleiman the Magnificent: A Captivating Guide to the Longest-Reigning Sultan of the Ottoman Empire, you will discover topics such as:

So listen to this audiobook now if you want to learn more about Suleiman the Magnificent!

What listeners say about Suleiman the Magnificent: A Captivating Guide to the Longest-Reigning Sultan of the Ottoman Empire

Sultan of the East

A very worthy read by Captivating History , like most of his works are as well. A Captivating Guide and story of Suleiman 1494 - 1566 was the tenth and longest-reigning Sultan of the Ottoman Empire, from 1520 to his death in 1566. He is known in the West as Suleiman "the Magnificent" and in the East, as the Lawgiver for his complete reconstruction of the Ottoman legal system.

The series is interesting in that it displayed how the Suleiman look back at their golden age and the nation's impact on the outside world.

His synopsis of his military accomplishments was the highlight of this auditory book. What a huge disappointment his lack of discussion of Herem and the contributions she made to the ottoman empire especially for women and children. It never ceases to amaze me.

Still reading it with much Pleasure

I have started listen to this historical audible and it is indeed really interesting. The facts are really fabulous.

Sultan of the Ottoman Empire

It is a very good book to read/listen. the author tells the history in a very clear way.