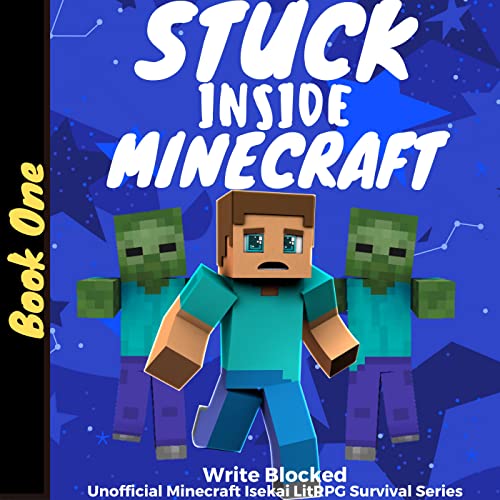 By: Write Blocked
Narrated by: Nate Ward
Try for £0.00

A Minecraft streamer is stuck inside Minecraft!

Michael is an average struggling Twitch streamer, but things get un-average pretty quickly when he is teleported inside the world of Minecraft. Things only get crazier when he finds out that he is the prophesied savior of Minecraft. Prophesied to do what exactly?

Save the world from Herobrine, an anomaly that entered the world of Minecraft to cause ultimate destruction, but his motives are more ulterior than you might think.

Join Michael as he meets new friends, trains to be a warrior, and fights Herobrine’s army of monsters. Can Michael muster the willpower needed to survive in the dangerous world of Minecraft, or will he fall? Will Michael ever get to leave the world of Minecraft and go back to the real world?

Find out in this action-packed new series: Stuck Inside Minecraft.

Disclaimer: This audiobook is an unofficial Minecraft fanfiction. It is not endorsed, authorized, sponsored, licensed or supported by Mojang AB, Microsoft Corp. or any other entity owning or controlling rights to the Minecraft name, trademarks, or copyrights.

What listeners say about Stuck Inside Minecraft: Book 1

My 9 year old and my 12 year old both enjoyed listening to this audiobook. They are both young gamers and love playing Minecraft. The audiobook was funny, entertaining, and had some fun action scenes. They have probably listened to it 3 times already.

I enjoyed listening to it as an adult as well! Well done and looking forward to the next one!

Why don’t you have the complete series? I would like it better.
Still good though!!