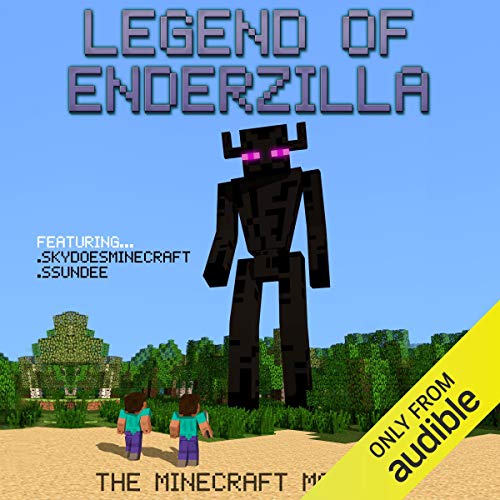 By: The Minecraft Maniacs
Narrated by: Joe Farnsworth
Try for £0.00

Legend of EnderZilla - Finally revealed for the very first time!

Sky and SSundee had never seen anything like it. This was a monster so huge, so powerful, and so scary that nothing could stop it. They called it EnderZilla.

EnderZilla lived on an island that was untouched for years. Sky and SSundee just wanted to explore the mysterious island and go home. But when EnderZilla finds them, they're forced to get creative and fight for their lives. How will they escape this deadly island? Can they defeat the giant EnderZilla?

Follow Sky and SSundee in this epic Minecraft novel to find out! Download now and start listening today!

What listeners say about Legend of EnderZilla

My little son loves this story. I like the readers voice, being that my boy listens to this whilst falling asleep.

My 8year old Loved it!

My 8yo minecraft mad boy found this story and is raving about it! Great story he said!

a bit frightening but really good (6yr old review). will listen to more of them

Cool, and intense, but kind of corny.

It’s basically like oh Minecraft stories, I liked it but it’s less than an hour and are usually like two hours or more books. I recommend it for ages 8-13

I love legend of enderzilla and I loved when they were looking for the treasure chest.

I can't say much about this personally but my daughter loves this audiobook. It only lasts about an hour so she can usually hear the whole story before she falls asleep at night.

"This was the best Minecraft story ever!"

My son listened to this and loved it! Let's see if the truly best is still to come ;-)

The Kids Loved It!

What did you love best about Legend of EnderZilla?

"When they found the treasure chest!" says 8 year old. The kids listened to the story in one sitting, begging to take the phone to bed with them so they could still listen.

Which character – as performed by Joe Farnsworth – was your favorite?

The 10 year says "Sky sounded just like he should". It's a simply written story, but the narrator read the story very well. His easy listening and authentic voice carried the kids, and me, right along with Sky and Ssundee.

It was great
I hope one day we can really see something like enderzilla.
I really like mincraft I call my myself a pro