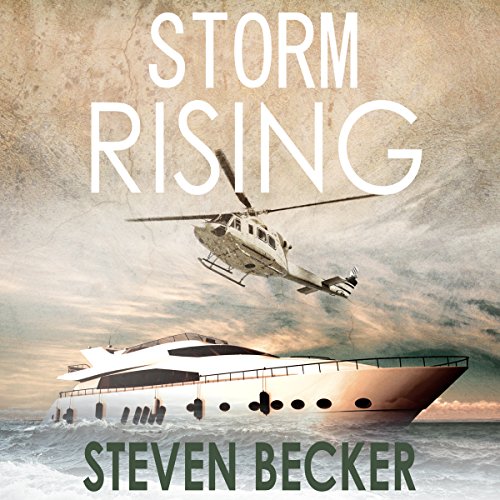 By: Steven Becker
Narrated by: Theo Holland
Try for £0.00

After being outwitted by an Iranian spy in London, CIA agent Mako Storm finds himself in dire straits. The trail for redemption leads Storm to the British Virgin Islands and an uncomfortable alliance with a man from his past. When they discover an old nemesis - a beautiful Chinese woman is involved - a terrifying plot to rebuild the blood thirsty Persian empire begins to unfold.

Only one thing stands between the empire and a new world order - American agent Mako Storm.

What listeners say about Storm Rising

this could be a good 1st book in a series, an interesting spy novel with family issues set in the Caribbean.

I Was Lost Yet Entertained Thanks to the Narrator

Perhaps I picked up a book in the middle of a series; that is the only reason that I can explain how lost I became during this audiobook as the chapters progressed. Sure it was fast moving, and dialogue heavy to a fault; I never knew who was who, as the characters were so two dimensional to remain talking enigmas.

Thus, I gave up at the 40% point. What kept me that long? The narration. Theo Holland is one of my favorite narrators, he is both extremely talented and sadly underutilized. He brings in vocal elements to his characters that are not jarring for the listener; a different infection here, a vocal tone there, and he always has just the right touch.

I have laid this one down but perhaps if I discover that I picked up a work in the middle of a series, I will give it a try, but I'll begin with book #1. All the better if that one is narrated by Mr Holland!

This is an interesting book. You need to pay closer attention as you go along. Mako is a spy and keeps things interesting. I thought it was written good and held your attention. I got lost a couple times but that didn't take away from enjoying the book. This is the first book in this series. Theo Holland narriates this one someone else narriates the next two. I will stop with this one but I'm glad I listened to it. I was given a free copy of this book and that has no influence on my review. Theo Holland does a great job narraiting this book.

A different type of spy thriller. The CIA has hired contractors. Mako who wants to redeem himself, will do the legwork. While Alicia is a whizz at the computer. Knowing back doors to find the file.
Given audio for my voluntary review and my honest opinion

The young agent comes at first like failed James Bond, but learns a few tricks by the end.

I received this book in exchange for and unbiased review.

What did you love best about Storm Rising?

How the author dealt with the logistics of the spy trade.

The lead characters' persistence in completing the mission.

What does Theo Holland bring to the story that you wouldn’t experience if you just read the book?

His narration of the various characters makes you feel as if you are 'there' watching the events unfold.

It's tough spying on your own.

Can't wait for the next 'Storm' novel narrated by Theo Holland.