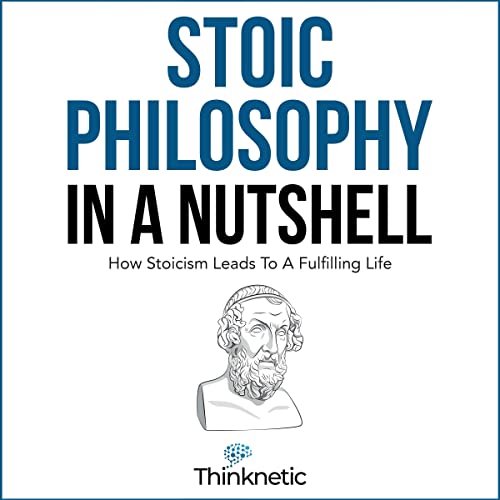 Stoic Philosophy in a Nutshell

By: Thinknetic
Narrated by: Adrian M Lopez
Try for £0.00

Do you find yourself confronted with the nagging feeling that you should be doing more, making better decisions, being a better person, and wanting more out of your life?

Once upon a time in Ancient China, there was a farmer with a brand-new horse. One day, his horse ran away. His neighbors gathered around him and said “It is so unfortunate for your horse to run away.”

The next day, the horse returned with seven wild horses. Now the farmer had eight horses! That evening, his neighbors gathered around him and said “You have eight horses now! What good luck.”

And the farmer said, “Maybe.”

The next day, the farmer’s son tried to ride one of the wild horses. He fell and broke his arm. The neighbors said “Your son has broken his arm. What poor luck!”

The next day, the army came to conscript villagers. Because the farmer’s son had a broken arm, he was not taken.

The villagers gathered around. “Because your son has a broken arm, he did not have to join the army! What a fortunate turn of events.”

And the farmer said, “Maybe.”

Are you seeing a pattern?

This farmer did not overreact one way or the other. He took events as they came and processed his emotions.

How often have you gotten some good or bad news and completely overreacted?

In hindsight, it wasn’t that big of a deal. You easily see how you could’ve calmly navigated a situation. Why can’t you think that way at the moment?

We are naturally emotional. For thousands of years, humans have struggled to think more rationally and less emotionally. And many leaders, politicians, and successful businessmen have found help in an ancient way of thinking: Stoicism.

Stoicism has been guiding people through life since the days of ancient Greece.

Stoic Philosophy in a Nutshell introduces you to the history and principles of Stoicism and guides you into applying the Stoic teachings in your everyday life.

Here’s just a sampling of what you’ll find inside:

Contrary to popular belief, Stoicism isn’t about being unfeeling and unemotional. It is a versatile way of thinking that can enable you to tackle any problem in life.

Stoics are people who can process and integrate their emotions, without overwhelming their decision-making.

What listeners say about Stoic Philosophy in a Nutshell

Great explanation of the Subject

Good overview on stoicism , engaging and interesting .In order to get it sank in fully I'd need to listen it again. Would be nice to have a series of exercises to practice stoicism in everyday life.

I was skeptical about this book, erringly judging a book by its cover. How wrong I was. The book gave me the guidance I needed.