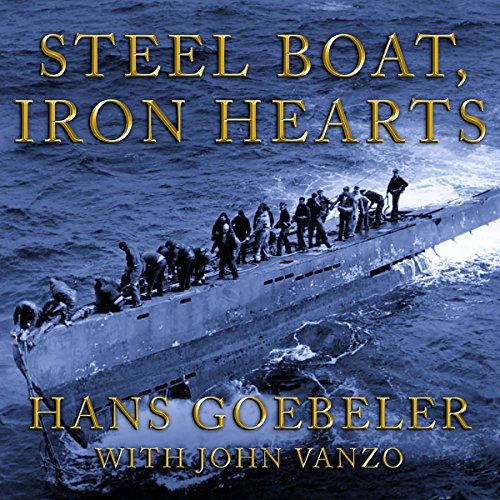 By: Hans Goebeler,John Vanzo
Narrated by: Norman Dietz
Try for £0.00

Using his own experiences, log books, and correspondence with other U-boat crewmen, Hans Goebeler offers rich and personal details about what life was like in the German Navy under Hitler. Since his first and last posting was to U-505, Goebeler's perspective of the crew, commanders, and war patrols paints a vivid and complete portrait unlike any other to come out of the Kriegsmarine. He witnessed it all, from deadly sabotage efforts that almost sunk the boat to the tragic suicide of the only U-boat commander who took his life during World War II. The vivid, honest, and smooth-flowing prose calls it like it was and pulls no punches.

U-505 was captured by Captain Dan Gallery's Guadalcanal Task Group 22.3 on June 4, 1944. Trapped by this "hunter-killer" group, U-505 was depth-charged to the surface, strafed by machine gun fire, and boarded. It was the first ship captured at sea since the War of 1812. Today, hundreds of thousands of visitors tour U-505 each year at the Chicago Museum of Science and Industry.

This edition includes a special foreword by Keith Gill, curator of U-505 at the Museum of Science and Industry.

The story is great, the narration is atrocious though. Audio books are serious literary vehicles and the choice of narrator is massive in their production. An English speaking German would have encapsulated the depth of this book, the narrator chosen detracted from it in every way. Re work this book and I'd buy it again but will never buy anything by this narrator.

I was looking forward to this one, but felt the narrator really mangled the text. I have a lot of respect for the guys who got into a steel tube and went under the water whatever flag they flew, but there was something about the author I didn't gel with.

I loved the story, but the narration was so monotonous and unemotional. Ruined the many tense moments.

A view from the other side

A brilliant story from the viewpoint of a surviving U — Boat sailor. As most war histories are written by the winners it is intriguing to see the war through the eyes of someone serving in the forces of the losers. They share the same hopes and fears, yet history dehumanises the Germans, incorrectly. This book tells the truth of what it was to be a member of an Elite few who suffered the worst percentage losses of any of the services, yet went out on a war patrol knowing they may never come back. They have my deepest respect.

Perfect reading of a great book

German WWII uboats are my hobby for almost 30 years. I know this book, I have this book, I read this book several times before. But even then I really did enjoy this reading during long driving on boring highways
Thank you!

I enjoyed all aspect of this audio book. It captivated my interest throughout. On the plus side is a learning experience of the duties of U BOAT crewmen and their boat. It highlights in detail Uboats capabilities and limitations. The book also highlights the relationship between German servicemen in an occupied France and the French people. Although the book mentions resistance fighters, mostly the locals collaborated with their occupier (after all it is France). I’m not convinced about all the exploits of the author. For instance he mentions the time he identified and beat up a French man for sabotage, then was ordered alone to find and arrest this Frenchman who sabotaged U boats. I would have thought that the whole apparatus of the military would have swung into action mostly led by the Gestapo and SS security police to hunt the French man down. The author then said that his french prisoner was let off by a German military tribunal 🧐🤥. This is hardly likely since the Frenchman would mostly likely be robustly questioned and possibly tortured for information on other Sabotage persons working in the docks repairing Uboats, then sent on a one way ticket to a concentration camp where he belonged. No one sabotage a u boat and get Let off with it. This was wartime Germany not the soft on crime woke UK 🇬🇧. The author is also frank about his gifted abilities with women. I conclude the audiobook is a mixture of truths, half truths and here and there a dashing of lies. However, I enjoyed the audio book mainly for an inside to life aboard a Uboat. The Uboat crew suffered the biggest attrition and out of 40,000 only 10,000 crewmen survived the war. I have nothing but total respect for them including this author.

WW2 from a German perspective.

I’ve read, (listened to), many WW2 stories. Always from the Allied perspective. After all, war stories are always written by the victors.
What an interesting, refreshing and enlightening story this book is. Told as he saw things, and not denying his beliefs at the time of war.
Well worth a listen. If for no other reason, it’s an experience of what life was like for the U-boat crews.

I really enjoyed this audiobook as far as the story goes, it's very interesting to hear the perspective of a common seaman in the U-Boatwaffe especially one who served on a boat that had such an interesting history.

The main drawback of this audiobook is unfortunately the narrator, he doesn't fit this book at all and his voice is so monotone that after a while it's like sitting next to a generator. His monotone American accent is so deadpan that it makes it hard to follow what he's actually saying and my attention constantly strays. From what I did follow though I found very intriguing and I will definitely be buying a physical copy of this book, mostly so I don't have to put up with this crap narrator.

get it together Audible! so many good books ruined by bad narrators.

Having just been disappointed after listening to 'The Crew' I was a bit dubious about another factual listen, but this has certainly restored my faith in this type of book. The narration might be a bit breathless at times but the story carries it through. A really enjoyable and educational listen.

well worth a read.

a very good book well written & narrated. if you enjoy war stories then this is perfect.

Not impressed with the narration

Disliked the unnecessary fake German soldier enthusiasm. The voice was annoying and made it bad.

Save your money, and buy the actual book.

I've listened to thousands of hours of Audiobooks. While I've come to be rather inured to the occasional horrible narration, I couldn't get past the first hour of this story. I mean seriously. Doesn't anyone vet these guys, or can just anyone off the street come in and somehow slur through his teeth and his nose, at the same time?

I grew up in Chicago and spent a lot of time at the Museum of Science and Industry I toured the U-505 many times when it was located on the outside rotting in the elements. I was elated when the old war relic was going to be given a proper home underground and fully restored to its real wartime appearance as a memorial to those brave souls who lost there lives and those who survived.
This book really brought to life the story of what life was like from a crewman's prospective. The story told here was absolutely very informative and eye opening. This was one of those books that really holds your interest. This was a well written memoir about life in Germany during wartime and living and serving in the U boat service. Eye opening.
Narrator was excellent.

At first it was really interesting to hear about life as a U-boat crew member. But quickly the other 40% is the author bragging about having sex with prostitues and talking about how brave he was. Got hard to listen to after the fourteenth paragraph talking about "we U-boat men were better" etc. Also lamenting over the genocide the German people suffered after the war seems pretty ridiculous considering what happened during the war.

What did you love best about Steel Boat Iron Hearts?

Interesting U-boat book but the narrator seemed a bit slow and sleepy, he didn't add any emotion when reading it. Nevertheless, I enjoyed it.

This is by an unrepentant Nazi

He claims the Soviets and Americans were the aggressors and that the Allies perpetrated a genocide against Germany. He also paints him self as a brave hero. DISGUSTING HUMAN

I enjoyed this. The author gave additional details about a submariner and specifically life aboard a u boat I had not heard elsewhere.

I really enjoyed it.

A great book, but it sounds like they took a few recordings of each passage and stitched them together. The change in tone of voice and emotion breaks the flow a little. At one point, the same passage is read twice in a row.

As interesting and dramatic as the classic, Das Boot. Not to be missed. You will feel like you are onboard and understand the German figjting man during times of better and worse.

I am not in a position to judge the author's wartime experience and I don't even wish to shame him for his allegiance to a vanquished German Navy. He was clearly indoctrinated and educated as an elite submariner only to be on the losing side at the end of the war, one of only 56 to claim the prize for first US Navy capture of an enemy vessel since 1812. However, while heavy burdens were placed on the author psychologically and agonizingly at such a young age (he explicitly states that he agonized over his own self perceived role in allowing U505 to fall into US Navy hands) the author's fragile yet outsized ego interferes with the story line by constant rationalization, editorial interjection, and narcissism-- a lot of "l's" and "me's"-- that call into question the factual authenticity of his accounts.