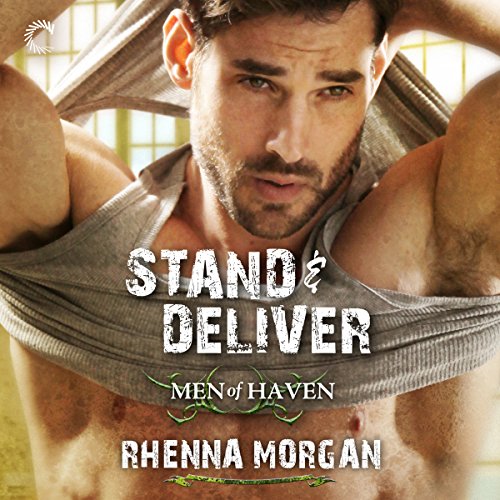 By: Rhenna Morgan
Narrated by: John Lane
Try for £0.00

Live hard, f--k harder, and make their own rules. Those are the cornerstones the six Men of Haven bleed by, taking what they want, always watching each other’s backs and loving the women they claim with unyielding tenderness and fierce passion.

Security expert Beckett Tate has met his match in colleague Gia Sinclair. He longs to run his hands over each and every one of her lush curves. She’s wicked smart and wicked hot. He’s given her time to get used to the idea of “them”, but her time is up and he’s ready to go all in on claiming what’s his.

Despite her love of all things girlie, Gia’s no typical Southern belle. She’s built her skills and reputation in a field normally dominated by men, and now she has a kick-ass career she loves. She certainly doesn’t need a man to take care of her - especially not one who’s pure alpha. Still, Beckett’s the one man who can satisfy the desires she’s hidden under her tough exterior, and she’s hooked.

Letting Beckett take the lead in the bedroom comes naturally to Gia - not constantly proving herself to him professionally is more of a struggle. And when someone attacks her character and career, Gia and Beckett will have to find a balance: her willingness to let go just a little, with his trust in her abilities and his deep, primal need to protect his woman.

This book is approximately 98,000 words

What listeners say about Stand & Deliver

I have liked this series a lot! There is action, intrigue, humor, Alpha Men and Women, sexy heat, a true example of family and not a lot of unnecessary angst! What more could a romance junkie want?

This series has been loaded with characters that have had a rough road getting to where they are. However, instead of being hateful and resentful, they have built their own support group to help them find their way to happy. Their hobby? Helping others that need a hand up. There’s no theme that could be more beautiful. These characters are full of layers and have surrounded themselves with people that accept their flaws and their strengths. Instead of having a chip on their shoulders, they constantly use their life challenges to build themselves up, and when they find love, they add more positive energy to their support group. There continues to be a lot of good lessons that can be learned by open minded listeners, in this series!

Absolutely loved Gia & Beckett’s story. Loved the tenacity of Beckett and his iron focus when he finally figured out what he wanted. Gia was such a strong woman that it was interesting to see her finally have someone that took control but also respected her enough to let her lead when she needed it. I liked the balance. Interesting on the SPD disorder. When Beckett lost control and Gia meets his inner beast I’m not gonna lie, it was seriously hot!! Narrator’s voice for Beckett has a low bass and growl that is simply yummy. Overall loved the book, characters and the audio! Highly recommend this one!

OMG This was awesome!

Rhenna did it again! I was so enthralled with this book, I couldn't stop listening. I loved the other 5 books and this one doesn't disappoint. I loved Beckett and Gia's story and can't wait to hear Axel's. Make it good Rhenna, we have waited long enough for the Scot to be taken down. Give him a heroine worth his salt!!! John as usual did a great job narrating. I will patiently wait for the next book in this series.