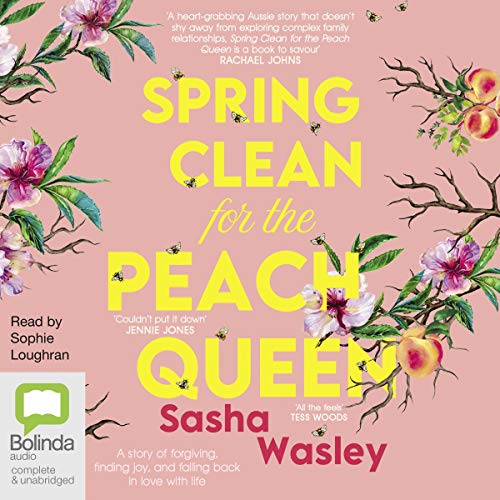 Spring Clean for the Peach Queen

By: Sasha Wasley
Narrated by: Sophie Loughran
Try for £0.00

Spring Clean for the Peach Queen is a beautifully nuanced, slow-burn love story that deals with failed expectations, second chances, grief and the importance of family and community.

Twelve years had passed since the last Bonnievale Harvest Ball. I was 18 then, still finishing high school when I was chosen as the Peach Queen. They crowned me with a peach-blossom coronet. And I was 18 when I left, intending never to live in Bonnievale again.

One tanked career, one badly timed glamour shoot and one dead boyfriend later, 30-year-old Lottie Bentz is finally going home. In the orchard town where she grew up, Lottie tries to purify and declutter her life, Kondo-style. She gets rid of her phone, clears out her old stuff and swears off make-up, mirrors and lying. But home has its own problems, and Lottie's staunchly feminist mother is furious about Lottie's risqué photos appearing in a magazine.

When kindly old Mrs Brooker offers Lottie a place to stay, it's not what Lottie expects, and she finds herself earning her keep in a clapped-out caravan on the Brooker farm, teaching the old woman about the Kondo method. But after Angus, the taciturn heir to the Brooker orchards, makes it clear that Lottie is not welcome, she soon begins to uncover secrets and half-truths surrounding the dotty Mrs Brooker, Angus' failed marriage and his dead father. And even though Angus has a life-threatening bee-sting allergy, he refuses to wear a veil when tending his bees. Why is he so bent on self-destruction?

As Lottie learns to cleanse herself and those around her, she reconnects with what's really important - and she encounters a few surprises along the way.

What listeners say about Spring Clean for the Peach Queen