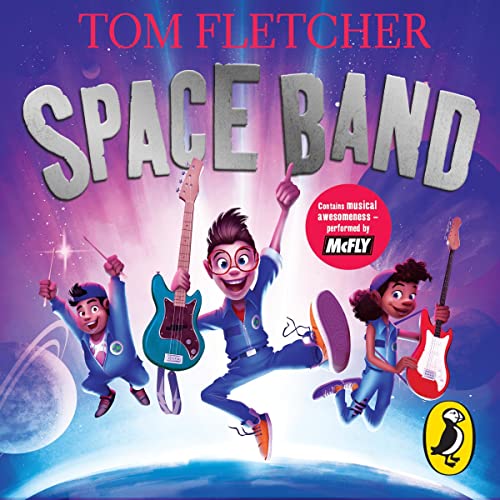 Brought to you by Puffin.

An out-of-this-world new adventure from bestselling author of The Danger Gang and The Christmasaurus, Tom Fletcher.

George, Neila and Bash are the worst band on Earth. George wants them to be brilliant—but Neila has stage fright, and Bash is too distracted by his obsession with stars, aliens and faraway planets. But what they lack in talent and confidence, they make up for in heart.

They're determined to blow their friends away at their school Battle of the Bands contest. But the moment they start to play...

They're beamed up into space!!!

Now the kids face an even bigger challenge: Battle of the Bands, but the intergalactic version. They're competing against alien bands from every galaxy! And if they don't win, they might never make it home again...

Can the worst band on Earth become the best band in the universe?

An intergalactically awesome tale of celebrating difference, believing in yourself, and the power of friendship.

What listeners say about Space Band

First of all COTTAGE rhymes with SAUSAGE!!!😡😆 too much music, they add like what seems like HOURS of rock music! ( maximum about 4 mins) I loved the narrator though😻😻😻, EPIC expression amazing , just, too much music and “ nonsense “
LOL

I am a massive mcfly fan. My children love his books. what a way to intwine them together! now they want to listen to mcfly! Tom, thank you so much for making me love mcfly more than I did because watching my children fall in love with mcfly made my heart burst ♥️ love always.

Super good me and my family loved the story and is so fun so listen to it.

Really good book may be a little more expression in the voices though but through all, it is really good

Really good book may be a little more expression in the voices, but overall it is quite a good book

It has got a great adventure in it plus it’s a really fun book to listen to.

especially special with the band playing the songs

My Son (age 8) LOVES Tom Fletcher as an author and this book has not let us down. It was especially special with the band playing the songs. Would and have recommended to all our friends.

Space is so cool

I loved it and it had amazing songs my favourite was so are band.

My 7 year old loved this

I didn’t listen to this, although I recognised Nico Mirallegro instantly as Newt from Hollyoaks (way back when) as I set this up for my 7yo! She loved it and loved the music and the story. What was supposed to be a spread out story was devoured within a week.