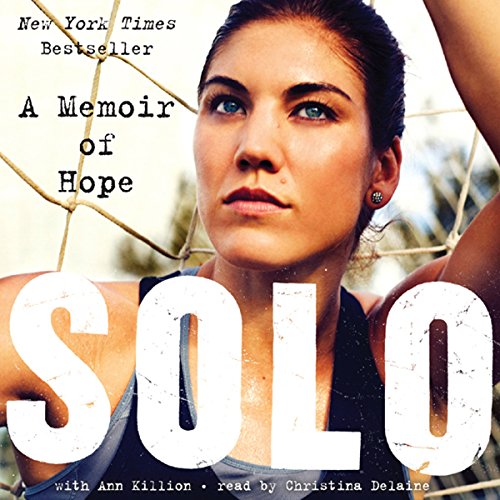 By: Hope Solo
Narrated by: Christina Delaine
Try for £0.00

"My family doesn't do happy endings. We do sad endings or frustrating endings or no endings at all. We are hardwired to expect the next interruption or disappearance or broken promise."

Hope Solo is the face of the modern female athlete. She is fearless, outspoken, and the best in the world at what she does: protecting the goal of the U.S. women's soccer team. Her outsized talent has led her to the pinnacle of her sport - the Olympics and the World Cup - and made her into an international celebrity who is just as likely to appear on ABC's Dancing with the Stars as she is on the covers of Sports Illustrated, ESPN The Magazine, and Vogue. But her journey - which began in Richland, Washington, where she was raised by her strong-willed mother on the scorched earth of defunct nuclear testing sites - is similarly haunted by the fallout of her family history. Her father, a philanderer and con man, was convicted of embezzlement when Solo was an infant. She lost touch with him as he drifted out of prison and into homelessness. By the time they reunited, years later, in the parking lot of a grocery store, she was an All-American goalkeeper at the University of Washington and already a budding prospect for the U.S. national team. He was living in the woods.

Despite harboring serious doubts even about the provenance of her father's last name (and her own), Solo embraces him as fiercely as she pursues her dreams of being a world-class soccer player. When those dreams are threatened by her standing within the national team, as when she was famously benched in the semifinals of the 2007 World Cup after four shutouts and spoke her piece publicly, we see a woman of uncompromising independence and hard-won perseverance navigate the petty backlash against her. For the first time, she tells her version of that controversial episode, and offers with it a full understanding of her hard-scrabble life.

Moving, sometimes shocking, Solo is a portrait of an athlete finding redemption. This is the Hope Solo whom few have ever glimpsed.

What listeners say about Solo

Not your normal memoir

First off, I purchased the book because my son plays keeper, and we both enjoy watching Hope Solo play--she is arguably one of the best goalkeepers in the world, male or female.
I had hoped for some inside tips--special tricks of the trade, a glimpse of a Michael Phelps type diet, a great drill that helped form her amazing reaction to the ball. Nope, not a word and you could probably substitute basketball or volleyball for soccer and still have same story. .
This isn't that type of book(and not for kids!)--if you want a good book to improve your child's game, try Audible's book by Dan Blank=="Everything your coach..."
Also, even though a sports writer assisted with the writing, the game scenes are as thrilling as the ingredients on a can of green beans

So why read this? Well----sports always have characters, people who have not just awesome talent but a knack for garnering as many headlines off the field as on the field.Tiger Woods, Terrell Owens, Michael Phelps, etc. They add the entertainment value to the sport. This is a fascinating inside glimpse of a such an athlete, and will leave you a better understanding of the pressures that they go through to get to the top of their sport and what helps to keep them grounded.

You should listen this book for four main reasons;:
1. This is a moving heartfelt love letter to her father, a man by her own admission she barely knew. At points I felt that this is her image of her father and possibly not a completely factual narrative. Either way the man was a major influence on her life and colored her actions in many ways.

2. Oddly, she almost relishes in not being a team player in one of the most team-oriented sports out there. For her, the most dramatic moment of her life wasn't winning Olympic gold or some stand-out game, but when she was suspended in 2007. Although I barely remembered the incident, she clearly exaggerates the importance of this to the rest of the world, and her explanation still smacks of the spoiled brat athlete, ala Johnny Manziel. Yet, I have to admit I did empathize with her as she described her teammates reactions. Excellent insight into pressure she faces on and off the field, as well as her overwhelming drive to perfection.

3. I had picked up Kevin Long's baseball book for tips for hitting, which he included, but was pleasantly surprised at the mini bio about how tough being a minor league player is. Similarly, Hope touches on the ups and downs of the women's professional soccer after college. Most of the female soccer leagues are jokes compared to baseball minor league teams, and if you aren't on the national team it is surprisingly difficult for the players to make a living. I do wish she had expounded more here and offered her ideas on how to improve both audience engagement as well as better situation for the players.

4. Hope's family is not the Brady bunch--they are more like a soap opera, full of fights, making up and love. Every major event in Hope's life, whether up or down, the various family members(usually hating each other) still come out to support her. Even her on again, off again, BFF Adrian is there. Here is where you gain most respect for Hope--her love for her family and friends abounds in this book.

Just be prepared as she is vindictive and does not hold back against any of those who "hurt" her, going all the way back to high school! Still an amazing person and athlete.

Narrator does a good job with this book--no issues whatsoever with performance.

*** postscript--it is May 2015 and have to say the Hope Solo on her twitter/facebook/blog shows her friendlier and unselfish compared to how memoir came across. 3-4 years since she wrote this and while important to read her memoir, don't stop there-- read her current writings after this book. --My personal wish is she follows up her career in 5-7 years by becoming a coach and motivational speaker, and works to improve women's professional soccer to equal or better standing with MLS. Too powerful a personality to disappear when her career inevitably ends. And perhaps she writes follow up 10-20 years from now about her whole career.

should be age appropriate for kids. cursing

lots of cursing. would like an kid appropriate version, overall good! really like the voice of the reader.

It’s interesting to see Hope in this light. After listening to some of the stories, you understand some of the extreme and irrational behavior. They’ve always said that goalkeepers tend to be “different”. This explains why that was true with Hope.

Hope Solo is an amazing person!

What did you love best about Solo?

Hope shared so much about her life story. Family is important to her. I especially love the heartfelt love for her Father.

What other book might you compare Solo to and why?

Not sure I can compare but I also loved Carli Lloyd- When Nobody was Watching!

What does Christina Delaine bring to the story that you wouldn’t experience if you just read the book?

She really gets into the character and you can feel Hope Solo's personality.

Yes, and I was able to because I was on a trip across New England.

The language was rough, therefore, not appropriate for all ages. I could have used less myself but I wouldn't have Hope write her story any differently.

it was very good

It explained a lot about her and her family life and it made you fell like you could connect with her in some way.

My 11 year old daughter and I enjoyed listening to this book, both the story and the reader were very good

I really loved this book, there's no better time to get immersed into the story of one of the greatest goalkeepers of all time than now. USWNT is in the finals of the World Cup and I know Solo will take them all the way!!!
Reading this book gave me a deeper appreciation for Hope Solo as an athlete and as a person . It was simply fantastic, and such a easy story to follow. Almost like having a conversation your a best friend...I hope there's more to come

Be yourself, everyone else is taken

Just loved hearing Hopes viewpoint. The media and others so often paint the picture from their viewpoint regardless of the truth.

Liked that Hope was able to discover much of what makes her tick.

Especially liked the details of what happened during matches, which brought back memories as I watched on the telly

Whether you like her or not she tells a good story from her perspective. She’s not always the hero nor always the villain. The narrator does an excellent job.

So, not what I was excepting! This book was two thumbs up! Enjoyed it greatly!