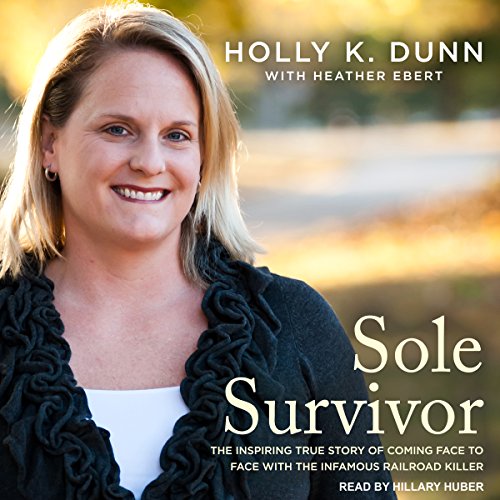 On August 28, 1997, just as she was starting her junior year of college at the University of Kentucky, Holly Dunn and her boyfriend, Chris Maier, were walking along railroad tracks on their way home from a party when they were attacked by notorious serial killer Angel Maturino Resendiz, a.k.a. The Railroad Killer.

After her boyfriend is beaten to death in front of her, Holly is stabbed, raped, and left for dead. In this memoir of survival and healing from a horrific true crime, Holly recounts how she lived through the vicious assault, helped bring her assailant to justice, and ultimately found meaning and purpose through service to victims of sexual assault and other violent crimes, working as a motivational speaker and activist and founding Holly's House, a safe and nurturing space in her hometown of Evansville, Indiana.

What listeners say about Sole Survivor

What an awesome story of heartbreak
,tragedy and healing! God bless you Holly and your family!

I heard Holly’s story on the podcast What Was That Like. Once she mentioned she wrote a book I knew I had to have it! She is such an inspiration and one strong lady! She overcame so much with her amazing faith. I definitely recommend this book!

Holly knew she had to do something for all victims

In college without a care in the world and hanging out with her boyfriend by the railroad tracks. Seems innocent enough. Unfortunately, Holly and her boyfriend, Chris were attacked and tortured by the rail road killer. Holly survives and is the only living witness after multiple murders occur across state lines. Holly tells her story from a place of Survivor's guilt while continuing to keep Chris's memory alive. It's a delicate balance many of us will never understand. Her faith in God is what truly amazes me the most. Thankfully, she had a lot of support and prayer helped her get through many tough nights. When she was finally able to testify against the man that tortured her and killed her boyfriend, all she wanted him to know was that he did not kill her. She wanted him to know she went on to graduate college. This is a sincere story of faith, resilience, trauma, and dreams lived. Holly is an AMAZING woman that took her tragedy and turned it into triumph to help other victims. Outstanding book about a woman that refused to stop living when the most tramatic incident in her life almost killed her.