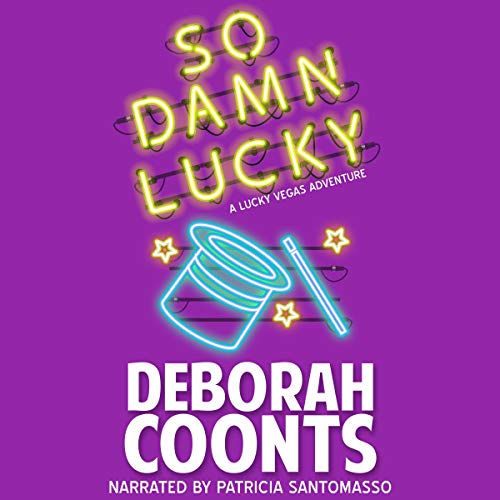 By: Deborah Coonts
Narrated by: Patricia Santomasso
Try for £0.00

Everyone has a hidden talent.

For Lucky O'Toole it's murder...solving it.

Her live-in lover, Teddie, has rock-starred out and taken his show on the road.

Her mother is a pregnant hormonal weapon of mass destruction.

But, as the Chief Problem Solver for the Babylon, Las Vegas's most over-the-top destination, murder isn't in her job description.

Then his body actually disappears.

Lucky is less than amused. She has enough problems already.

Paxton Dane, a handsome Texan long on charisma, short on history, is pressing for an opening.

And the new French chef is equal parts charm and venom, seasoned with a dash of irresistible.

But Lucky can't shake the question: did Fortunoff really die or is this some elaborate hoax?

With his connections to the UFO convention in town, outlandish theories abound.

Love, laughter, and a few evil spirits from the Great Beyond or the Great Void.

A light, funny, romantic mystery providing a Vegas escape appropriate for anyone looking for a good laugh. Join the fun today!

An interview with Deborah Coonts

Why did you decide to write humor?

I'm not sure I decided to add snark to the Lucky books, specifically to Lucky's own voice, it just happened that way. When I was a kid, my mouth always got me into trouble. Finally, I've found a way to harness the sarcasm for the Forces of Good - or at least in a way not to anger my grandmother. And when Lucky started talking to me, she had a strong dose of sass in her.

The Lucky O'Toole Vegas Adventure series is hard to categorize. Is that by design?

When I set out to write Wanna Get Lucky?, I knew I wanted to write a romp through Las Vegas. I had the characters and the setting but no real understanding of narrative drive. So, I threw a young woman out of a tour helicopter into the middle of the Pirate Show and let the story unfold. A bit of murder to keep the plot moving, some wisecracking and Vegas mischief to make you laugh, and some romance to keep it interesting. A bit of a mash up, but it works.

"Lucky's latest lark brims with the over-the-top ridiculousness that I love about Vegas. Fans of the series will fall in love all over again, and new readers will look forward to her next escapade." (Publishers Weekly)

"Lucky's the kind of gal who will make any heart beat faster." (Kirkus Reviews)

“A whirlwind of a kooky crime novel, and readers will enjoy every minute of it. Coonts provides the perfect solution for readers waiting for the next Stephanie Plum book.” (Booklist)

What listeners say about So Damn Lucky