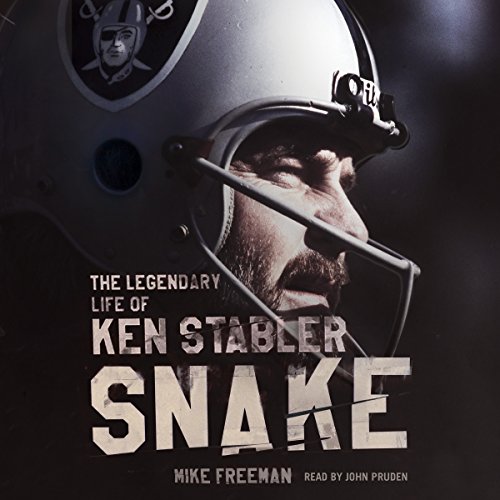 By: Mike Freeman
Narrated by: John Pruden
Try for £0.00

The first in-depth biography of one of the most talented and infamous legends to play in the National Football League - the life and times of pro football's first bad boy, famed Oakland Raiders quarterback Ken Stabler.

Ken "The Snake" Stabler was the embodiment of the original Men in Black - the freewheeling, hard-hitting Oakland Raiders. The league's first swashbuckling pass thrower, the mythical southpaw Southerner famous for come-from-behind drives late in the game, Stabler led the Raiders to their first Super Bowl championship in 1977. In an era dominated by gentleman quarterbacks like Roger Staubach and Bob Griese, this 1974 NFL MVP, four-time Pro Bowler, and Super Bowl champion was an iconoclast who partied as hard as he played and lived life unapologetically on his own - not the NFL's - terms.

Though Stabler's legacy is larger than life, there has never before been an exclusive account of him - until now. Snake goes deep under the surface of Stabler's persona to reveal a man who, despite his penchant for partying and debauchery, was committed to winning and being the best player he could be. From his college days playing for Bear Bryant at Alabama to his years with the Raiders under coach John Madden, his broadcasting career to his death in 2015 and the revelation that he suffered from chronic traumatic encephalopathy, known as CTE, Snake probes the myriad facets of Stabler's life on and off the field to tell his complete story and explores how his legacy and the culture and times that pivotally shaped it continue to impact football today.

What listeners say about Snake

Great story about a childhood legend!!!

loved every part of this book! what an amazing life he lived & legacy left

Anyone who is a football fan will love this book

I grew up in the 70's and 80's as a Raider fan, and my favorite player was, you guessed it, Kenny "Snake" Stabler. So of course I was thrilled to read/listen to this biography.

It's a well researched and written biography. It starts with some basic info and a few anecdotes about his childhood, then goes into some details about his college career, and then the bulk of the book details his Pro Football career. Lots of stories and insights, lots of facts and statistics. It also talks about his, somewhat tragic, life after football, all the way up to his death.

I have also read the auto-biography by Ken Stabler, and while I'm glad I've read both, if I had to pick one, it would be this one. Stabler has a bunch of fun stories and such to tell, and there's something neat about hearing things from his mouth so to speak, but this book is newer so talks about more of his after football stuff, and there is also more insightful analysis of the man and what makes (or made) him tick.

Highly recommended to any Raider fan.

Mike captures the human side of Stabler, while still showing how the myth of Snake was born.

While an entertaining subject, especially for those who are old enough to remember 1970’s football, this book is very average. Not particularly well written. Certainly must be better books on Stabler!