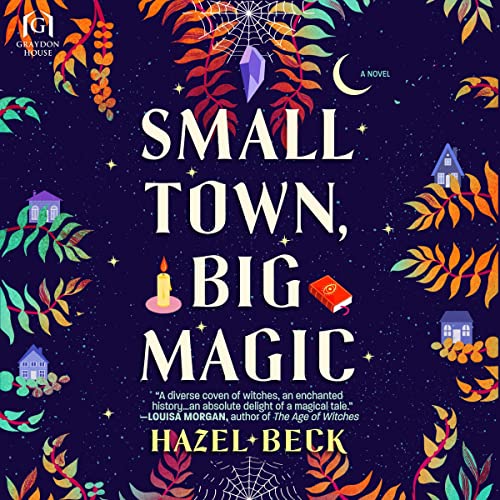 By: Hazel Beck
Narrated by: Natalie Duke
Try for £0.00

There’s no such thing as witches…right?

Emerson Wilde has built the life of her dreams. Youngest Chamber of Commerce president in St. Cyprian history, successful indie bookstore owner, and lucky enough to have her best friends as found family? Done.

But when Emerson is attacked by creatures that shouldn’t be real, and kills them with what can only be called magic, Emerson finds that the past decade of her life has been…a lie. St. Cyprian isn't your average Midwestern river town—it’s a haven for witches. When Emerson failed a power test years ago, she was stripped of her magical memories. Turns out, Emerson’s friends are all witches.

And so is she.

That's not all, though: evil is lurking in the charming streets of St. Cyprian. Emerson will need to learn to control what’s inside of her, remember her magic, and deal with complicated old feelings for her childhood friend—cranky-yet-gorgeous local farmer Jacob North—to defeat an enemy that hides in the rivers and shadows of everything she loves.

Even before she had magic, Emerson would have done anything for St. Cyprian, but now she’ll have to risk not just her livelihood…but her life.

A compelling and enjoyable novel filled with romance and magic. Essentially the story is what if Lesley Knope discovered she were magic and tasked with saving her town. I loved all the characters, especially her friends, which were richly drawn. The main character is slightly irritating as she is realizing her powers but I realized it was due to the pacing of the reader. Her voice and performance are great but I think she was directed to speak much too slowly. I simply increased the listening speed (some thing I’ve never done before) at 1.4x I fully enjoyed the story. I’m looking forward to the next book in the series

I see why so many recommend this book.

After receiving multiple recommendations for this book, I can easily see why so many enjoy it. It’s exciting without being overly stressful and like any good book, while I wasn’t listening, I often thought about what might be happening next and looked forward to listening to more.

I don't know what all the bad reviews are about because for a long time ive heard people wanting a strong female lead in a story.
this was just that it was a breath of fresh air to not have a whiney love sick woman following some male like a love sick pup.
this group of friends had me smiling and enjoying the banter and all the girls being strong and confident not taking the guys crap was great. it also had me hoping for a second book for their fight against joywood and hoping for more magic.

The story was good. Could have been much better without all the wordy dialog the main character constantly and I mean constantly says to herself. It got to be annoying and I found myself skipping entire sections. She was very full of herself and it made me dislike her.

For anyone who is slightly enchanted in a world of witches. This book, will tell you a story you will want to live in and fighting to turn the pages faster. An amazing must ready. Paired best with a Tea and some crystals.

I so badly wanted this to be a five star book! Unfortunately though, it just fell a little flat. While the overall premise was unique and exciting, I felt like some parts were rushed over and some were focused on too long. The characters were fun, but I never felt attached to them. I was really hoping for a cozy, small-town feel and I don’t feel like we spent enough time learning and “seeing” the town. I would have loved a bit more atmospheric development to really bring the witchy town vibes to life. Definitely not bad, just not what I was hoping for.

The main character was annoying

I liked the story and the idea a lot. I enjoyed the feminist aspects and the found family element was sweet BUT the main character was so annoying. I love confident women and women who are sure of themselves and feel like they don’t need help but Emerson got so incredibly annoying and too narcissistic as the book went on. She did eventually learn to accept from her friends and loved ones but she then went on to praise herself about it non-stop. She made the story less enjoyable and the plot was something I enjoyed. I also felt like the ending came kind of abruptly when the rest of the book was well-paced.

I think the concept was good but execution fell flat in this story. Narrator also didn’t help. Too whiny of a voice.

Saw someone describe the main character as a cross between Leslie Knope and a witch, and I couldn't describe it better myself. Fun read, just adjust the listening speed to 1.4, because the narrator is very slow.