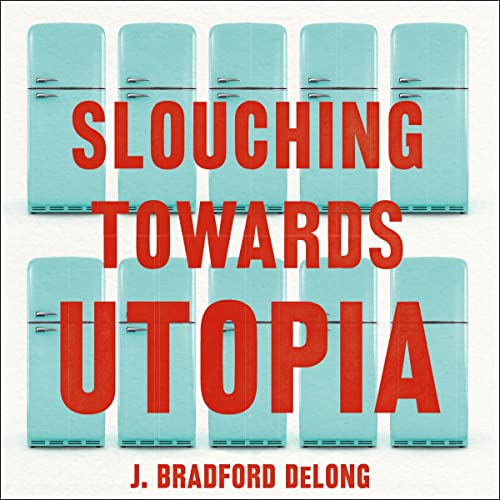 By: J. Bradford DeLong
Narrated by: Allan Aquino
Try for £0.00

From one of the world's leading economists, a sweeping new history of the twentieth century—a century that left us vastly richer, yet still profoundly dissatisfied.

Before 1870, most people lived in dire poverty, the benefits of the slow crawl of invention continually offset by a growing population. Then came a great shift: invention sprinted forward, doubling our technological capabilities each generation, and creatively destroying the economy again and again.

Slouching Towards Utopia tells the story of the major economic and technological shifts of the 20th century in a bold and ambitious, grand narrative. In vivid and compelling detail, DeLong charts the unprecedented explosion of material wealth after 1870 which transformed living standards around the world, freeing humanity from centuries of poverty, but paradoxically has left us now with unprecedented inequality, global warming and widespread dissatisfaction with the status quo.

How did the long twentieth century fail to deliver the utopia our ancestors believed would be the inevitable result of such material wellbeing?

How did humanity end up less on a march to progress than a slouch in the right direction?

And what can we learn from the past in pursuit of a better world?

What listeners say about Slouching Towards Utopia

More enjoyable than your average economic history - yet

Worth a listen although somehow already out of date. The conceptualisation of a Hayak-Polanyi axis around the proper basis for human rights which informs a lot of the argument knocks some of the wind out of current political polarisation and the evidence for judging Hayek both a genius and insane is convincing. The thinking that needs to be done to critique the basis of the modern discipline in the pursuit of growth, development, continued expansion of the human realm is out there but hasn’t really made it into this account

Is there such a thing as an un-biased political commentator? Sadly, economics is not a science, it involves people who do not operate scientifically. And seeing your interpretations as facts only to fit your narrative is disappointing.