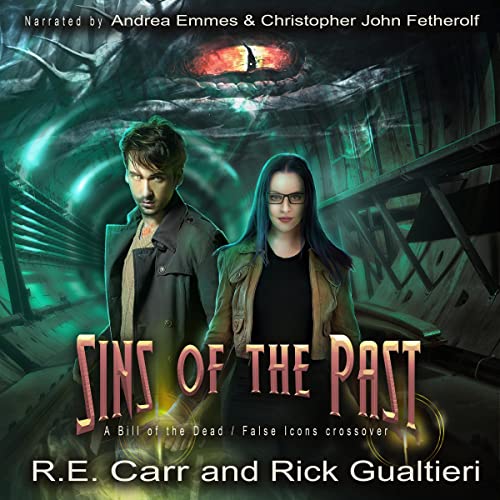 Sins of the Past

Burying the past is easier said than done.

Ed Vesser feels trapped by his life - literally. He’s being held prisoner by a would-be world conqueror. All he wants is to escape back to his fiancé, assuming she doesn’t dump his ass when she finds out he’s a vampire.

Serena Taylor’s a witch with a knack for technomancy - using her magic to help deliver unreal profit margins. Too bad she’ll need to put in some overtime thanks to long-lost dryads and undead goons breathing down her neck.

Now they’re both stuck deep beneath Boston, exploring the ruins of a former vamp stronghold. She’s looking to walk away with intel on the burgeoning vampire nation. He’s simply hoping to walk away. Neither’s going to be easy, especially once they realize they’re not alone.

When ancient evil stirs, Ed and Serena will discover they have one thing in common - a burning desire…to stay alive as they learn that some secrets were meant to stay buried.

What listeners say about Sins of the Past

not for Bill of the dead fans

Another fine addition to the Strange Days/False Icon series. Narrators were wonderful, as usual, but I wish they had both stuck to doing the voices from their main books, and not went the whole female does female part and vice versa. Still loved every minute though

This one was a little confusing. Because the series it applies to none of the main characters on involved here it’s all side characters. And because I’m a couple months removed from the others in these two series coming together I’m not 100% familiar with all these characters. :SPOILER:As I recall the second string savior died at the end of the last book. So I can’t recall exactly who was representing Gary but I’ll go back and catch up. This was the appetizer the main course is the newest full length book in the series that immediately follows this one