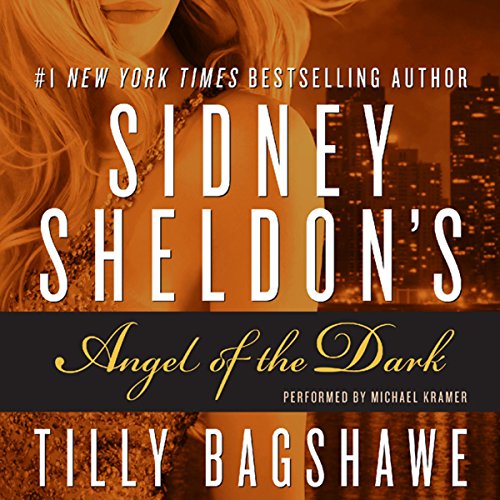 Sidney Sheldon's Angel of the Dark

By: Sidney Sheldon,Tilly Bagshawe
Narrated by: Michael Kramer
Try for £0.00

It was his first big murder case - and one of the bloodiest and most violent crimes LAPD detective Danny McGuire would ever encounter. Andrew Jakes, an elderly multimillionaire art dealer, had been brutally murdered in his Hollywood home, his lifeless body tied to his naked young wife. Raped and beaten, the lovely Angela Jakes had barely survived the attack herself. Gazing into her deep, soulful eyes, Danny swore that he'd find the psychopath behind this barbarous act. But the investigation didn't turn up a single solid lead, and within days of Angela's release from the hospital, the stunning young widow - Danny's only witness - had vanished.

For ten years Danny McGuire could not forget the sweet face of Angela Jakes and the terrible crime that had shattered her life; his obsession with her nearly cost him his sanity. Now in France, thousands of miles from the past - with a new life, a new job with Interpol, and a ravishing new wife - he's happier than he's ever been... until he meets Andrew Jakes's estranged son, Matt Daley.

Curious about his father's murder, Matt has been digging into the cold case—and made some shocking discoveries. Three killings nearly identical to his father's have taken place across the globe. The victims were elderly, newlywed millionaires, their young wives assaulted. And in each case the widow, the sole beneficiary of the will, donated her newfound wealth to children's charities and then vanished. Could it be true? Had the Jakes killer struck again? If so, Danny knows he must tread carefully or risk losing everything for good.

The evidence points to a single killer - a brilliant and ruthless criminal who travels across the globe under a string of assumed identities, cleverly keeping one step ahead of the law. Joining forces, Danny and Matt pursue this intriguing shadow from Los Angeles to London, New York to Italy and the French Riviera, in a tantalizing game of cat and mouse filled with promising leads and frustrating dead ends. When another murder fitting the profile occurs, Matt heads to Hong Kong, hoping to get answers from the latest widow, Lisa Baring, and perhaps uncover the hard evidence they need.

But Matt becomes besotted with the irresistible beauty, nearly derailing the investigation, and Danny wonders whether Lisa is truly a victim or something more sinister. When a break in the case sends Danny to Mumbai, he knows he must act quickly, for the clever killer is poised to strike again.

A fast-paced story full of mystery, glamour, excitement, and spectacular twists that build to a stunning ending, Sidney Sheldon's Angel of the Dark is quintessential Sheldon from first page to last.

What listeners say about Sidney Sheldon's Angel of the Dark

One of the best, first time listening to a tilly bagshawe book, it was great.

Which character – as performed by Michael Kramer – was your favourite?

Angel of the Dark

In an effort to retain the listener's interest, the story had many facets, which helped to maintain momentum. However, it became too convoluted, which somewhat detracted from a coherent tale.

All in all, a good listen.

The story is full of mystery and excitement..It contains perfect twists which increases our excitement to read next chapter. It keeps us to go on with the next chapters. At the end everything is revealed and the ending becomes more interesting..

I was really frustrated with the ending and would have preferred if the story stopped a couple of chapters beforehand. The narrator did a good job voicing the characters but a lot of the female voices tended to sound the same

A terribly long winded book with a far fetched ridiculous story. Boring from start to finish, Thought it would never end. Disappointed even more to realize it wasn't written by Sidney Sheldon but rather in the style of SS. Bit of a con.

I've read a number of Tilly Bagshawe Sidney Sheldon books and whilst the plot is always relatively guessable, it's still really well written. Narration was good also, however some of the accents maybe need a bit of work, like the London and Australian ones, but those parts were only small, so didn't impact much... Great read/listen...

awesome
mysterious
enjoyed it to the every end ...
beautiful narrated
the characterist voice was brilliant

A great book with a surprising ending

Which character – as performed by Michael Kramer – was your favorite?

Michael Kramer did a great job on all the characters. Sometimes the accents were a little hookey, but still good.

I will be listning to this book again - soon!

MY HEART WAS POUNDING HARD!!!!

I didn't want it to end.....it was a suspense, thriller, if I had any nails before I started reading this book, I must of bit them all off! I really loved this book. WOW!!

The beginning was a little confusing to me till it all tied together, then this is a can't put down listen. Narrator was excellent as well. It was one of those reads where you can't wait to find out how it turns out and I must say it was pretty far fetched but entertaining none the less. Now if somebody could explain the end to me I would love that, Who is Carlo Hernandez. So if you listen and get something I missed. Let me know.

Would you try another book from Sidney Sheldon and Tilly Bagshawe and/or Michael Kramer?

Maybe, but Sidney Sheldon alone is much better.

If you’ve listened to books by Sidney Sheldon and Tilly Bagshawe before, how does this one compare?

I have listened the "Mistress of the game." This one is on the same level, but far below "The Master of the Game", Sydney Shelodn's classics!

Would you be willing to try another one of Michael Kramer’s performances?

Did Sidney Sheldon's Angel of the Dark inspire you to do anything?

It would be nice to have more Sidney Sheldon's books on the site. There are so many exciting stories.

Yes, not knowing what to expect and where it was going.

What does Michael Kramer bring to the story that you wouldn’t experience if you just read the book?

some things became obvious to me long before I thought the detective should have already known. I still enjoyed the story very much.

You will be very engaged from the start. Lots of twists! Highly recommend for all!

If it was a Book, I Would not put it Down!

Lots of twists and as soon as one played itself out, the book has another!

struggle to finish it. was not his usual level of writing. however, I would recommend it.

Long and too many characters

This was a story I was waiting to finish. It was too long and too many characters to remember and keep up with. The ending was confusing because the character that was mentioned I couldn’t remember who it was since I’m guessing it was mentioned way in the beginning. The story did have some shocking twists but just too long and slow.