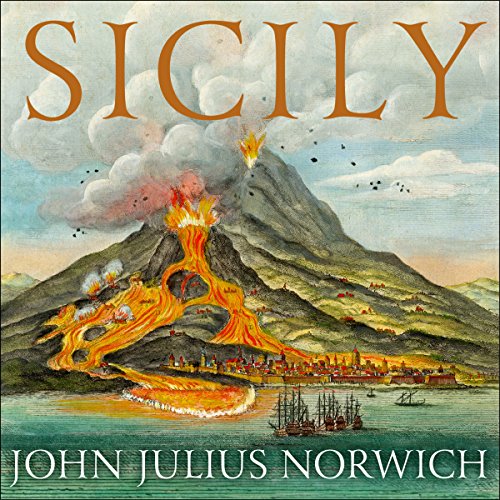 A colourful history (50 years in the making) of the Mediterranean's largest and most turbulent island from much-loved historian John Julius Norwich.

I discovered Sicily almost by mistake.... We drove as far as Naples, then put the car on the night ferry to Palermo. There was a degree of excitement in the early hours when we passed Stromboli, emitting a rich glow every half minute or so like an ogre puffing on an immense cigar; and a few hours later, in the early morning sunshine, we sailed into the Conca d'Oro, the Golden Shell, in which the city lies. Apart from the beauty of the setting, I remember being instantly struck by a change in atmosphere. The Strait of Messina is only a couple of miles across, and the island is politically part of Italy; yet somehow one feels that one has entered a different world.... This book is, among other things, an attempt to analyse why this should be.

The stepping stone between Europe and Africa, the gateway between the East and the West, at once a stronghold, clearinghouse and observation post, Sicily has been invaded and fought over by Phoenicians and Greeks, Carthaginians and Romans, Goths and Byzantines, Arabs and Normans, Germans, Spaniards and the French for thousands of years. It has belonged to them all - and yet has properly been part of none.

John Julius Norwich was inspired to become a writer by his first visit in 1961, and this book is the result of a fascination that has lasted over half a century. In tracing its dark story, he attempts to explain the enigma that lies at the heart of the Mediterranean's largest island.

This vivid short history covers everything from erupting volcanoes to the assassination of Byzantine emperors, from Nelson's affair with Emma Hamilton to Garibaldi and the rise of the Mafia. Taking in the key buildings and towns, and packed with fascinating stories and unforgettable characters, Sicily is the book he was born to write.

What listeners say about Sicily

The content is fascinating but unfortunately the tone of voice of the narrator is dire, if he had somewhere else to be I wish he had left the recording until he could give the words his full attention. A book I looked forward to hearing ruined for me.

But spoilt a little by dispirited and at times lazy narration and absolutely bizarre pronunciation. I blame the editor if, indeed, there ever was one. It’s unforgivable that any editor should allow such mistaken pronunciation.

A difficult task done well. A huge history with the salient points highlighted and doest drag

Shame about the narrator

Great book but listening to the narrator was extremily boring.When he pronounce Italian words was singing
really annoying, i can't even finish listening.I rather read the book.

This is a hard review to write. There is a lot to like with this book but as others have pointed out, this is mostly a story about the rulers of Sicily rather than Sicily itself. There are also sections in this book that I have no idea why the author have have chosen to be in a book about Sicily. For example huge sections about Lord Nelson who had a minimal impact on Sicily. Even worse is the ridiculous amount of time given to Lady Hamilton. I am sure the stories about Nelson and Lady Hamilton are interesting but they have really no place in a history a about Sicily (at least that is my opinion, your opinion might differ).

However the sections about Roman Sicily and The Norman kingdom of Sicily are generally good and interesting.

in summery: the book is a mixed bag

The text of this narrative about Sicily’s history is brilliantly written and very interesting but the voice reading it has an accent that is hard to place with an American twang (though the author is English) and he mis-pronounces place names and country names throughout - ‘pantocrater’ he pronounces as ‘panto-crater’ as if he was talking about a pantomime and a volcano. These errors marr the reading, and he also sounds bored and fed up with the story he is reading a lot of the time.

Killed by the narration.

John Julius Norwich is one of my favourite writers, and this is one of my favourite books in his canon. I hesitate to be unkind, but the narration destroyed this as an audiobook for me. Badly paced, strangely enunciated, with at least one town's name pronounced in three different ways. Sloppy to say the least. I stuck it to the end only to afford myself the opportunity of writing a review based on the whole recording. Truly disappointing.

This book is packed to the brim with information. It is interesting, particularly the earlier chapters, before it starts to focus almost exclusively on royal and military history. Those are not my favourite subjects, and I personally feel they only shed a very limited light on the history of Sicily. What about the food, the music, the dancing, the fishing boats, the star-studded nights, the mountain views? I’m getting carried away. I was slightly frustrated by the narrator’s ignorance as to the correct pronunciation of the many foreign names. But, I get it: foreign languages are hard, and asking someone to correctly pronounce Arabic, Dutch, Greek, Latin, Italian, Spanish, and French names is a bit much. So all in all the book is a cautious succes.

Fills a void in my knowledge

As an immigrant to Italy living in Umbria this book filled a gap in my knowledge of the country and ensured I will tour Sicily soon. I have read nearly all his books and even bought a home in Venice after reading his history of Venice.

This is an excellent history of Sicily, as one might expect from the author. The narrator is not as bad as some of the previous reviews have suggested, but he could certainly have taken the trouble to check the pronunciation of the Italian place-names that recur frequently. Here are a few that he always gets wrong:
Catania, Viterbo, Lucera.
The strangest mispronunciation of a place-name is "Enna", which for some reason he pronounces "Enya" (and he does the same thing to the last two syllables of "Ravenna" and "Siena").
Here are some where he consistently stresses the wrong syllable:
Taranto, Trapani, Lipari, Brindisi (in all four the accent should fall on the first syllable).
He also mispronounces the word "Regno" (kingdom), another recurring word.
However, the oddest mispronunciation is the word "father", which he always says as "fawther".
It isn't enough to ruin the enjoyment of the book but it seems a pity. It wouldn't have taken long to check these points.

Helped me answer a lot of questions about Sicily

An interesting overview of the Sicilian history. Listened to the audio version, while I was travelling for three weeks in Sicily. The book helped me put a lot of cultural things into the context and explained why Sicily evolved the way it did. Now, looking at this amazing mix of ancient greek, byzantine, norman and baroque monuments I feel less confused. Highly recommended if you can spend some extra time on exploring Sicily or to add to your general knowledge about the Mediterranean.