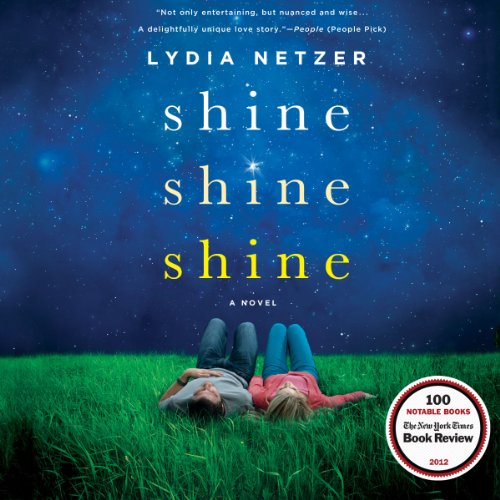 By: Lydia Netzer
Narrated by: Joshilyn Jackson
Try for £0.00

When Maxon met Sunny, he was seven years, four months, and 18 days old. Or, he was 2693 rotations of the Earth old. Maxon was different. Sunny was different. They were different together.

Now, 20 years later, they are married, and Sunny wants, more than anything, to be “normal”. She’s got the housewife thing down perfectly, but Maxon, a genius engineer, is on a NASA mission to the moon, programming robots for a new colony. Once they were two outcasts who found unlikely love in each other: a wondrous, strange relationship formed from urgent desire for connection. But now they’re parents to an autistic son. And Sunny is pregnant again. And her mother is dying in the hospital. Their marriage is on the brink of imploding, and they’re at each other’s throats with blame and fear. What exactly has gone wrong?

Sunny wishes Maxon would turn the rocket around and come straight-the-hell home. When an accident in space puts the mission in peril, everything Sunny and Maxon have built hangs in the balance. Dark secrets, long-forgotten murders, and a blond wig all come tumbling to the light. And nothing will ever be the same.

A debut of singular power and intelligence, Shine Shine Shine is a unique love story, an adventure between worlds, and a stunning novel of love, death, and what it means to be human.

Nothing happens. Absolutely nothing.

Is it possible to give a zero rating? I would if it were. Flat affect, no plot, no story worth mentioning, no suspense. Just nothing. One is never really drawn in by the characters, and always feels twice removed. Its a high-pitched boring, empty narration in the third person, of a period in Sunny's life which should have been interesting, but isnt. She's bald. Her son is autistic. And she's bald. Her husband seems sweet and clever, but also autistic. Did I mention that she's bald? She does, on average every 10 minutes. I think the book is there to tell us that she's bald. They all try to fit in with social norms. So she wears a wig. So what.

Big events (like murders) which happen to characters who are close to her (like parents), are simply mentioned and dropped. You never hear anything more about them. But inane, boring and petty details are given huge and lengthy prominence. A case of small things amusing small minds?

There are two good points to this book: Firstly, you can doze off, and when you wake up you'll still be where you were before, and she'll still be bald. Secondly, it ends. Later rather than sooner, which is a pity. I sometimes wonder how some books manage to get published, but am glad Audible took it off the website's main banner.

I'm a voracious reader, not normally a big fan of audio books. My attention tends to wander easily. I can't sing along, so the radio beckons.

When I first saw the amazing reviews for this novel, I downloaded the sample text pages to my Kindle. Truth is, although I really wanted to like it, I just didn't feel compelled to keep reading. There's so many fantastic novels out there competing for my attention, more books than I could possibly read in my lifetime, so I gave up on this one...much too prematurely, as it turns out.

Two things happened: (1) my commute to work suddenly increased substantially with many of my favorite radio stations out of range for part of the trip, & (2) I learned that one of my most favoritest authors in the whole world performed the audio version of the novel and she posted a link to listen to the first chapter.

Wow! What a difference! Most of the subtle tones and nuances that I missed when reading the first pages suddenly came alive. What was going on with this slightly Stepford Sonny person? I had to know more...immediately! So I signed up for membership and used my first credit on Shine, Shine, Shine. This audio book took me prisoner and wouldn't release me until I learned the fate of the whole crazy, bizarre, dysfunctional-in-a-good-way family of misfits. Not only did I listen on my commute, I spent a few evenings with my earbuds plugged into the Kindle, totally ignoring all my favorite TV shows (much to the joy of my fiancé who got to watch the science shows that I normally hate and refuse to watch).

Speaking of which, this book is better than relationship therapy if you are a woman lucky enough to be coupled with a partner who resembles Maxon more than Mr. Darcy.

Highly, highly, highly recommended. Now I'm going to have to go back and purchase the actual novel.

The complexity of the relationships and the events that formed them.

When Maxon was hallucinating about Bubber

Which character – as performed by Joshilyn Jackson – was your favorite?

Joshilyn Jackson could read Audible Privacy Notice in Hebrew and I would love listening to her... but her specialty seems to be strong, flirtatious and damaged women and Sunny was no different. She came alive for me and I'm going to miss her.

This was an odd duck.

For some reason I was under the impression that this was going to be a science fiction novel, but it is not that at all… it is a contemporary novel. This worked out for me because I tend to like the latter genre more anyway. This story is about Sunny and Maxon. They are a unique married couple who were also close childhood friends, so they have had a long history together. Maxon is a scientist going to the moon to start a robot colony there… he also seems to be maybe have Asperger's or some other type of autism. Sunny is pregnant at this time and they have a toddler called Bubber who also has autistic tendencies. The story goes back and forth between their present life and their past. I enjoyed the story when Sunny "narrated" more than when Maxon did. Maxon is a bit too robotic and scientific for me. I found myself losing my attention span when it was the "Maxon" parts. "Sunny's" parts were much more interesting and spontaneous to listen to. I felt that this story was about how we hide behind who we really are. How humans put up barriers and facades to fit in to what they think is "normal" society. This book is also about breaking down those barriers and being who we really are in the midst of all this "normalcy". I have to say that the book got better as it went on and I did really enjoy the story, but it took time to grow on me. Joshilyn Jackson was only an ok narrator and this took away from the overall listening experience. Thus, the 3 star rating.

Not an ordinary tale, this story lets us in on the inside lives of very different people trying to live their lives the best they can. It approaches autism and its various disorders and shows it to be just another facet of the human character.

Integrating one's quirks into society is difficult for many. The characters in Shine Shine Shine do it, each in their own way, allowing us to watch the tragedies and triumphs that they go through in dealing with their disabilities and achievements.

The conclusion is uplifting and I cheered to know that all ends well in its own way.

Prob not... pretty lackluster considering all the time it took to set up the story itself, it could have ended so much better.

Interesting book, it slows after the initial introduction of characters and plot but hang in there; from the middle onward it crescendos into one of the better books I've come across. I liked the reader, she captured to the tone of the voices well and especially made Sunny come to life.

Didn't think I would like this book at all from the description. It had been sitting in my library, unread, for ages and each time I looked at it, I wondered why on earth I had bought it. But as soon as I started listening, I realized the narrator was one of my favorite authors and I had bought it because she recommended it. So glad I did. Amazing story, great characters, held my attention the whole way through.

A Magical Story of Beauty in the Fringes

Would you consider the audio edition of Shine Shine Shine to be better than the print version?

I haven't read the book in print, but I would assume it doesn't include the adorable bonus musical tracks at the end. The narrator is delightful, and brings a fanciful, whimsical tone to the work.

I liked the way all the plot points were reeled out slowly and steadily, until you find yourself enmeshed in Sunny's eccentric world without actually knowing how you got there--and in the course of the book, the path is revealed, as Sunny discovers the meaning of all that has brought her to the present. The book started out reeking of "chick lit" to me, but its twists and turns reveal it to be far more.

There are so many memorable episodes; the book is vividly drawn: Each detail of the car accident, life with Bubber, Sunny's childhood and teenage years with Maxon. The space scenes were gripping, of course, but so were the details of life at home: the neighborhood craft fair, the dinner party, and discovering Les Weathers's house.

While he's traveling in space, can she keep her life on Earth any less far out?

The writing is good, the performance good, the presentation of the story....confusing. The author takes chances here. The characters are fresh and interesting and she takes them almost to a place of satisfaction, then drops off. This is the sort of book that I wish brought home the build up, but it just doesn't. I think it's character heavy while the three main characters= the family, are short changed.